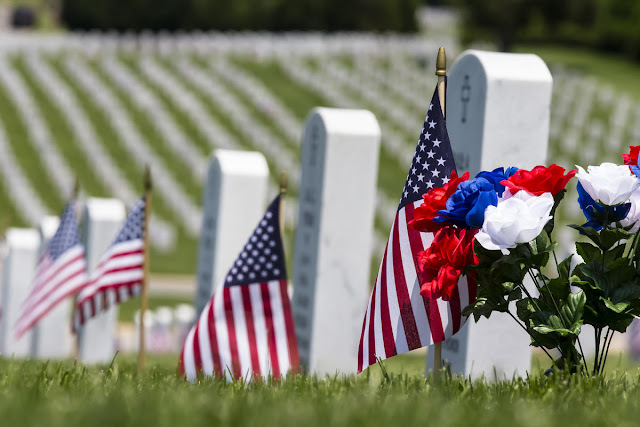 I love learning about American History. I really enjoy the little things about some of our traditions and where some of our holidays came from. I've been doing some reading on the origin of Memorial Day, and I found out it was originally called Decoration Day.  It was originally May 30th instead of "the last Monday in May" as it is now. It was a day set aside to remember those who have died while in the service to our Nation.

There are many stories as to its actual beginnings, and from what I've read so far there are over two dozen cities and towns that claim to be the birthplace of Memorial Day. There is also evidence that organized women's groups in the South during the Civil War between 1861 and 1865 were decorating the graves of their fallen.

But all in all, I don't think it's important where it started because I feel it's more important that we understand why it was started. It is more than likely that it started in many different places when our Nation was torn apart by Civil War.

It may began as someone simply deciding that the graves of their town's dead needed recognition and remembrance. It may have been planned or maybe it was just a spontaneous gathering of people to honor the war dead in the 1860's.

We should remember that many of the early Cowboys were men coming West to get away from the destruction that was left after the Civil War.  Observences of special dates was a way of keeping a connection for the home they left behind.

Memorial Day was officially proclaimed a day of remembrance on 5 May 1868 by General John Logan, national commander of the Grand Army of the Republic. In his General Order No. 11, it was a day first observed on 30 May 1868, when flowers were placed on the graves of Union and Confederate soldiers at Arlington National Cemetery.

The first state to officially recognize the holiday was New York in 1873. And yes, the tradition spread West as well. With the Cowboys and the Pioneers coming West came the traditions and values that are the glue that holds a Nation together. It is a part of our identity.

Some folks might find it odd to think that Americans in Cow towns, in Rail heads, at Ports, in Gold Camps, and across the West would take the time to observe Memorial Day. Most don't think of the Old West as having celebrations and such. But in fact, even when California was just an isolated State in the West.

Folks out in what was called the "Far West" were celebrating the 4th of July, Christmas, and yes Memorial Day.

Yes, the Cowboy who worked all day in the hot sun, the Miner who prayed as he dug for gold and silver, the Teamster who hauled everything that everyone needed with his team of mules or oxen, as well as all others in the West took the time to stop on Memorial Day in observance of those who have fought and died defending nation during the Civil War.

In the West, where the Civil War did not play out so dramatically as it did in the East, Memorial Day was a day to also recognize those who fought to help them settle the land, keep their homes, and keep them free.

Some folks don't realize that in the West, there were churches actually everywhere. Some were Missions dotted throughout California left over from the Spanish. Some were Chapels built in new towns. Some took the shape of tents in Mining Camps, while others were make-shift alters made out of stacked rocks.

Like in many parts of the Country, out in the Old West, Memorial Day was a time of prayer and worship. It was a time to thank and remember.

By 1890, Memorial Day was recognized by all of the States except for those in the South. The South refused to acknowledge the day, and instead decided to honor their dead on separate days. That separation lasted until after World War I when the holiday changed from honoring just those who died fighting in the Civil War to honoring all American Servicemen and women who have died while serving our Country.

It is now celebrated in almost every State on the last Monday in May, which was passed by Congress with the National Holiday Act of 1971 to ensure a three day weekend for Federal workers. And of course, knowing how "Southern Pride" runs deep, many Southern States have an additional separate day for honoring the Confederate Civil War dead still to this day.

Unlike in the Old West, today we have a problem!

Traditional observances of Memorial Day has greatly diminished over the last 30 years. Believe it or not, many Americans nowadays have forgotten the meaning and traditions of Memorial Day. Some even confuse Memorial Day, which is set aside as a day of remembrance of those who have died, with Veterans Day which is a day set aside so that we can thank veterans for their service to our nation.

As shameful as it is, at many cemeteries with graves of the fallen servicemen and women, more and more of those fallen are being ignored and neglected. Some believe that most Americans no longer remember the proper flag etiquette for Memorial Day of lowering our flag to Half Mast.

While there are towns and cities that still hold Memorial Day parades, many are not and haven't in years. And unfortunately, some Americans actually think that Memorial Day is for honoring any and all who've died and not just those fallen in service to our country. It's not. It is specific to those who have served our nation in uniform.

My friends, we need to educate and remind our children that Memorial Day is not just another day off. It's not just another 3 day holiday.  We need to return to the days when all Americans set aside one day out of the year to remember and honor those who have died.

American troops have liberated more cities and have sent more evil back to Hell than any other nation in the world. We have forced dictators and despots to flee and in some case commit suicide. We have given freedom to more than can be counted. And in contrast to every other such powerful nation in the history of man, we have not planted our flag and declared ourselves conquerors. Instead, we have only sought friendship and peace in return. In every case where diplomacy has failed, the American Soldier, Sailor, Airman, and Marine has been there to right wrongs and bring about victory.

Yes, indeed. They have given so much to us, and one day of remembrance is not much to ask in return.