A Poem by Tom Correa

My bay’s registration's with the American Quarter Horse Association.
He’s got great bloodlines and real nice conformation,
Yet at first, I swore I bought a cold-blooded clown
Who was so darn cinchy he’d simply throw himself down.

Sure he doctor’s easy and he’ll trailer OK, and sure both’s a benefit,
But with his crow hop’n starts, teeth jar’n gait, and the way he throws a fit,
I started to wonder if later I’d have a few regrets.

Now since I was raised around ol’ cowboys, a lot’a kids and cattle,
And over the years moved a few cows for folks,
I wasn’t completely blind to see I needed my son under saddle
And maybe some round pen work with a lunge line and rope.

Of course having things go right is always my hope,
But I know real well some things just won’t.

Allow me to try to elaborate and maybe make a few things straight:
You see Murphy still ain’t trained to head or heel, or sit in a box and wait,
And crossing water and opening gates are still among the things he hates.

Though at times he can go from easy keeper to bronc with no holds barred,
I did hook on to a bay want’n to respond with a great second wind and heart.

He's a horse that saved my life when I saved his.
And I don’t care if others laugh about my treat’n him as if he were my kid.

Some say I shouldn’t spoil my boy Murphy, and yes he can be a knot-head.
But simply put, he has done all that I've asked and to his credit
He simply doesn’t understand the word quit.

You see, he’ll move cows all day through any terrain, and that’s just a start.
He’ll go anywhere, do no matter what, and work real hard.

So folks can think or say what they may,
And yes some find it strange to treat stock my way,
But they’ll probably never understand how a horse like my bay
Can truly sneak into a life and steal your heart away.

In fact it wasn’t that long ago at a local auction, I think it was in late May,
That I couldn’t believe my ears when I heard my friend’s ol’ Uncle say,
“You should sell that horse of yours, and buy yourself a good horse today!”

Now I’ve only known the ol’ Timer a short while, and he’s likable of course,
But I figured he’d lost his mind by the way he talked about my horse.

Being respectful, I only replied, “No thanks, Murphy suits me just fine.”
Then days later, my friend and his ol’ Uncle asked me if I had some time
To help them go into the hills and look for a few strays they couldn’t find.

Now we worked all day and only stopped a few minutes to get out of the sun,
I’d say my friend's ol’ Uncle was purely amazed, I’d even say he was stunned,
See’n the way Murphy works for me, and that he just ain’t as bad as some!

And later when our day had ended and it was awful close to sundown,
I tried not to give him too hard a time as I figured the time had come around,
So I just sort’a brought up a fact to his attention and mentioned mostly in fun,
“Yes Sir, Uncle Louie, to sell ‘em would be pretty dumb!” 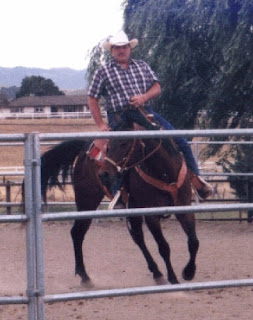