Walter Glazier was born near Albany in upstate New York. He joined the Union Army at the outbreak of the Civil War and was captured by Confederate troops in October 1863.

Over the next year, Glazier was moved from prison to prison throughout the South until he was able to make an escape in November of 1864.

His freedom was short-lived, however, as he was soon recaptured.

Following the war, Glazier wrote a book recounting his experiences that became a bestseller.

His experiences during the war not only brought him financial independence but imbued him with a wanderlust that inspired a plan to travel America from coast to coast on horseback.

In early May 1875, Glazier mounted his horse in Boston and headed west. His journey ended on November 26 when he waded in the waters of the Pacific near San Francisco.

The time in between was filled with adventure that resulted in another book published in 1896.

We join Glazier's story as he leaves the town of Cheyenne, Wyoming in the company of two horse herders.

Glazier describes his fellow travelers as "rough men and plain of speech, but apparently reliable and trustworthy."

They are escorting a group of mustangs to Salt Lake City for sale.

As the travelers clear a rise in an area known as "Skull Rocks" about thirty miles west of Cheyenne, trouble appears on the horizon:

". . . over a slight elevation appeared a body of Indians - thirteen in number. This caused us no surprise at first, as Indians are often seen on the Plains.

We soon discovered, however, that they were on no friendly errand, and were pronounced by the herders to be a raiding party of Arrapahoes [sic].

They were decked in their war paint, and as soon as they saw us raised a shout.

My companions, fearing that they were in the presence of an enemy who would doubtless endeavor to relieve them of their mustangs and ponies, made friendly signals.

The signals, however, were ignored by the Indians, who continued to advance and gradually formed a circle around us.

This is the common Indian mode of attack.

The circle is contracted while a fire is kept up upon the centre where the victims are effectually imprisoned - the Indians by rendering themselves a constantly shifting target are thus comparatively safe from the fire of the centre.

Riding around rapidly and firing at us, I and my two companions returned the fire over the backs of the mustangs and ponies which were used as a breastwork.

The circle gradually became smaller in diameter, when a shot from the gun of one of the herders killed an Indian.

A rush was now made upon us, our arms wrested from us, and ourselves speedily bound together with thongs.

The mustangs and ponies were promptly seized, and we were prisoners. Further resistance was useless.

We were helpless in the hands of twelve powerful Indians. We were soon ordered to mount, and the entire party, less one Indian, killed, started off in a northerly direction. 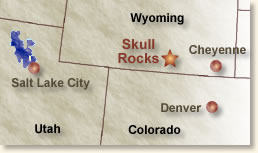 Skull Rocks - site of the attack

We rode at a trot until about ten o'clock at night, when a halt was ordered by the leader - a chief called ‘Lone Wolf’ - and all dismounted; a fire was kindled and some antelope meat partially roasted, a portion of which was given to us. We were all squatted around a big fire, the Indians being engaged in earnest conversation.

One of the herders understood enough of their language to explain that the discussion referred to their captives - that the friends of the Indian who was shot at Skull Rocks, and who were in the majority, were in favor of putting us all to death for having killed one of their number.

Lone Wolf, however, interposed, saying it would be enough to take the life of the one who had killed their brother.

The supper over, four of the Arrapahoes approached us and seized the herder who had fired the fatal shot.

They forced him towards a stout stake which they had previously driven into the ground about fifty yards from the fire.

The whole party of Indians then, without ceremony or talk with their victim, commenced dancing around and torturing him in the most fiendish manner.

They had heated their arrowheads in the fire and held them in contact with his naked flesh, while others, at a few feet from their victim, cast at him their sharp-pointed knives which, penetrating his body, remained embedded in the flesh until he nearly died from agony.

One of their number then advanced and shot him in the head, and this ended his sufferings.

In the meantime, the other herder and I were seated on the ground bound together and unable to offer any assistance to our tortured companion.

Several of the Indians now approached us, and dragging me to the stake, bound me to it and commenced a series of dances accompanied by much gesticulation and taunting which they doubtless intended as a sort of introduction to tortures which were to follow.

Lone Wolf who at this time was some distance from the camp-fire, rushed forward and dispersed them.

One of the Indians removed the scalp from the head of the dead man and fastened it to his waist; after which they all squatted around the fire again, engaged for the most part in shouting and speechmaking. I had never before witnessed a case of torture by Indians and trust I may never see another.

The horses of the Indians had been tethered by long ropes to stakes.

A guard of two Indians was placed in charge of us, and we were made to lie down, still bound together, with an Indian on each side of us to prevent our escape.

The other Indians disposed themselves around the fire and slept. . .

. . . At the first streak of dawn, the Indians in a body leaped to their feet.

The herder and I were each given a mustang which we mounted under the close scrutiny of our guards and the entire party started northward at a brisk trot."

The Indians and their captives rode for three days, resting at night.

We rejoin Glazier's story as dawn breaks on the fourth day and the prisoners, their hands bound, see a chance for escape:

"I now worked at the cord on my wrist and found I could unfasten it. While making the attempt one of the Indians moved in his sleep, and we ceased our efforts for the moment and all was quiet again.

The opportunity arrived, at length, the knot was loosened, and the noose slipped over our hands which gave us our liberty.

We knew where the arms lay, and each of us quickly and quietly secured a navy revolver without disturbing our guards.

We then, together, struck the two sleeping guards a strong blow on the head with the butt of the revolvers.

The one struck by the herder was nearly killed, while my man was only stunned.

We now made for the ponies, leaped into the saddles, and, before the other Indians had shaken off their slumber, had struck out with all our might in the direction from which we had come.

Not many minutes elapsed before a pursuit commenced in right earnest, the Indians shouting and yelling as they urged their ponies forward; but this had the effect only of spurring us to still greater speed.

I turned in my saddle and sent a bullet among them.

Another and another followed, and one Indian was dismounted, but the darkness prevented our seeing if the other shots had told.

The Arrapahoes returned the fire, but luckily without any worse result than increasing the pace of our flying ponies.

Away we tore at the top of our speed and soon entered a canyon.

Only two or three Indians could now be seen in pursuit, and my companion saying it would be safer for both if we took different directions, at once dashed off through a ravine to the right.

One Indian was observed following, but I sent a bullet into his horse, and this put a stop to further pursuit.

I now dropped into a gulch where I remained hidden until daylight.

Finding the coast clear in the morning, I emerged and set out walking in a southwesterly direction which brought me to a cattle ranch, the owner of which, after hearing my story, supplied me with food and a fresh mustang.

Again turning my face to the westward I pursued my course over the Rockies."