President Obama’s latest comments on the Keystone XL oil pipeline, including his weak attempt to downplay the number of jobs it would create, are igniting outrage over concerns that the administration may not approve the project.

To some, the proposed Canada-to-Texas pipeline has been one of the most divisive political issues of the past four years. It has essentially pit Republicans and other pro-business groups including labor unions against extremist in liberal environmentalist groups and the Democrat Party.

Others see the Keystone XL oil pipeline for what it is, just another pipeline in a network of oil pipelines that will bring needed jobs to America.
President Obama's tact on the pipeline is the same as his approach to other issues such as:
First, he ignores it; next he says its being "looked into" or he's waiting for "findings" from some group made up of his political appointees; after that he stalls longer for one reason or another; then he finally starts to "attack" it.

It the case of the IRS, the NSA, the EPA, and the Benghazi scandals, he gets the liberal news media to join his chorus in branding their criminal acts as "phony."

Now its the Keystone XL oil pipeline's turn to be denigrated publicly.

The president started it in an interview Saturday with the New York Times when he repeated his position that the administration’s decision "will be based on whether or not this is going to significantly contribute to carbon in our atmosphere."

However, he also took a swipe at what he described as the Republicans’ argument that Keystone would be a "big jobs generator."

"There is no evidence that that's true," Obama said, arguing the best estimate is 2,000 initial construction jobs followed by no more than an additional 100 jobs.

The newspaper's transcript of the interview showed Obama chuckling as he made the point.

"That is a blip relative to the need," he said.

With the left-leaning Associated Press, using their own survey, reporting that 4 out of 5 U.S. adults struggle with joblessness, near-poverty or reliance on welfare for at least parts of their lives.

The AP stating that it is a sign of deteriorating economic security and an elusive American dream.

The survey data is exclusive to The Associated Press. It points to an increasingly globalized U.S. economy, the widening gap between rich and poor, and the loss of good-paying manufacturing jobs as reasons for the trend.

But Mr. Lip Servive Obama doesn't get it!

He doesn't understand any job creation is better than his policy of no job creation if a project doesn't meet his liberal policitcal test.

Is it OK with his liberal supporters in extreme environmentalist groups?

No, so why should we think that it will pass. Fact is, it won't take place until we get control of the entire Congress.

Obama estimates significantly lower job creation than his own State Department’s projection of 42,000 constructions jobs and way smaller than the 118,935 that project developer TransCanada expects.
Regardless of the accuracy of the numbers, the comments only fueled concern that the administration is viewing the pipeline with increasing skepticism, after sidelining the decision during the presidential election year.

Republicans blasted Obama on Monday for his comments and for apparently chuckling while discussing the controversial issue while at his own jobs rally Wednesday.

"A president disparaging private-sector jobs while backstage at a jobs rally is beyond belief," Michigan Republican Rep. Fred Upton, chairman of the House Energy and Commerce Committee, told FoxNews.com.

"In this economy, any source of private job creation should be welcomed with open arms. After nearly five years … there is no reason to delay these jobs another day. Republicans, Democrats, leading unions, and job creators all agree, it’s time to start building."

The Republican National Committee said in a statement Monday: “President Obama joked about the potential job creating power of the Keystone XL pipeline. With our economy lagging, the president should be jumping at any opportunity to create jobs instead of bending to the will of special (interests) at the expense of out of work Americans.”

U.S. Chamber of Commerce spokesman Matt Letourneau told FoxNews.com the president’s comments indeed raised concerns but that the group “was not terribly surprised.”

“The president has had ample opportunity to approve this, and he has repeatedly found ways not to,” Letourneau said.

The White House did not respond to a question about where the president got his estimate -- after Obama challenged reporters in the interview to confirm the jobs projections.

Letourneau pointed to a 2011 Cornell University study with similar numbers, while adding the president “should probably stick with his own administration’s numbers.”

He also argued the non-controversial southern leg of the pipeline has already created 4,000 jobs.

The 1,179-mile-long pipeline is expected to transport as much as 830,000 barrels of crude oil daily from the Canadian oil sands (which will result in much of the additional carbon output) and the Bakken shale formation in North Dakota and Montana to refineries on the U.S. Gulf Coast.

Supporters say the estimated $5.3 billion project also will lower the price of gasoline and reduce the country’s dependency on foreign oil.

However, the president also downplayed those expectations, beyond the “potential benefit” of bolstering our energy-relations with a “reliable ally to the north.”

Using more lies and scare tactic to disparage the project and its needed jobs, Obama told The Times, "That oil is going to be sold on the world oil markets, so it does not bring down gas prices here in the United States. In fact, it might actually cause some gas prices in the Midwest to go up where currently they can't ship some of that oil to world markets."

The final decision will be made by Secretary of State John Kerry and is not expected until the end of the year or early 2014 - after the next mid-term election. Imagine that!

Kerry will supposedly base the decision on a second and final State Department environmental report scheduled for a fall 2013 release and a so-called “national interest” report.

But frankly, most believe its a dead deal because Kerry will dance to Obama tune!

The second report, which is expected to be complete in late this year 2013, is being compiled by eight federal agencies and focuses on such issues as Keystone’s potential impact on transportation and the overall U.S. economy.

Upton has repeatedly argued that Keystone has already been subject to 15,500 pages of environmental study and that the time is now to approve the project.

“After more than four years of regulatory delay, the administration has run out of excuses,” he said several weeks ago.

But then again, instead of the needs of the nation, Obama can always talk about that would be killer Trayvon Martin.

I mean, what else do we expect from a "phony" president! 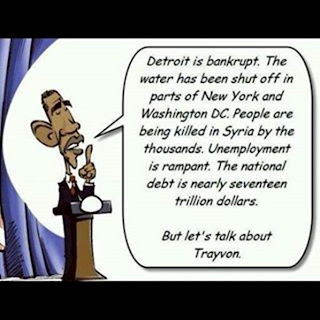