While these are only a handful, there are more than 120 different types of duck in the world.

The ducks are divided between several subfamilies:
And yes, ducks may have been responsible for the discovery of the Americas?

Apparently on October 8th, 1492, crewmen aboard one of Columbus's ships, the Pinta, observed ducks flying south-west and altered course to investigate.

On October 12th, they sighted land in the Bahamas. 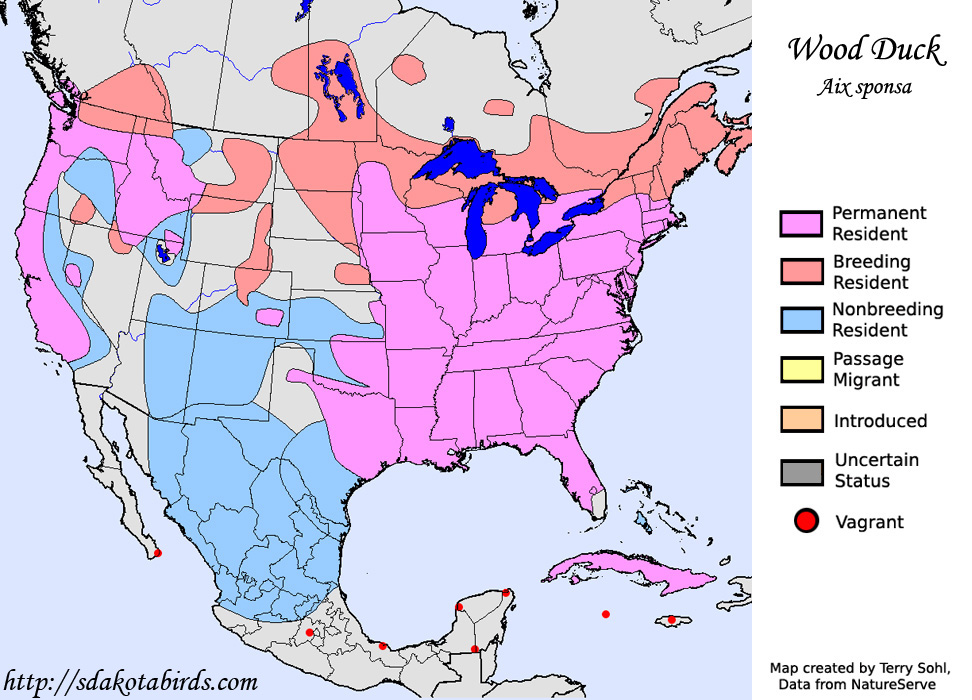 All types of ducks are part of the bird family Anatidae, and there are species of ducks found worldwide on every continent except Antarctica.

A baby duck is called a duckling, and an adult male is a drake.

An adult female duck is called a hen or a duck, and a group of ducks can be called a raft, team or paddling.

All ducks have highly waterproof feathers as a result of an intricate feather structure and a waxy coating that is spread on each feather while preening.

A duck's feathers are so waterproof that even when the duck dives underwater, its downy underlayer of feathers will stay completely dry.

Ducks are precocial, which means that ducklings are covered with down and able to walk and leave the nest just a few hours after hatching.

A hen will lead her ducklings up to a half mile or more over land after hatching in order to find a suitable water source for swimming and feeding.

Male ducks have an eclipse plumage similar to females that they wear after the breeding season for about a month as their new feathers grow.

During that month, they are completely flightless and more vulnerable to predators.

Most duck species are monogamous for a breeding season but they do not mate for life.

When constructing her nest, a hen will line it with soft down feathers she plucks from her own breast. This gives the eggs the best possible cushioning and insulation.

A duck's bill is specialized to help it forage in mud and to strain food from the water.

A hard nail at the tip of the bill helps with foraging, and a comb-like structure on the sides of
the bill strains small insects and crustaceans from water.

Instead, their calls may include squeaks, grunts, groans, chirps, whistles, brays and growls.

It is a myth that a duck's quack won't echo.

This has been conclusively disproved through different scientific acoustic tests, and was even featured as "busted" on an episode of the Discovery Channel show Mythbusters.
But like it or not, some myths refuse to die, "a duck's quack doesn't echo is an enduring urban myth."

This is true even when researched and busted by the University of Salford, Manchester, England.

When you think about it, how hard is it to put a duck in a sound studio and turn on the recorder. Result - the duck's quack echoes.

Ducks have been domesticated as pets and farm animals for more than 500 years, and all domestic ducks are descended from either the mallard or the Muscovy duck.

There are more than 40 breeds of domestic ducks.

The white Pekin duck, also called the Long Island duck, is the most common variety raised for eggs and meat.

One amusing ritual for introducing friends to an Indian restaurant, is to persuade the greenhorn to order a Bombay duck, and then watch their incredulity when the waiter brings a dried fish.

The "Bombay Duck" really is a fish, or to be completely accurate, a lizardfish, which does indeed live in the waters off Bombay.

Seven Peking ducks were imported into the United States from China in 1873.

Little did these entrepreneurs realise that these ducks would turn into a $30 million industry farming and cooking their Peking ducks ancestors.

Incidentally, attempts to rename Peking duck to Beijing duck have been a spectacular failure.

"Dabbling ducks" is a general name for a classic duck.

The duck you see in children's books, the mallard duck that you see at top of this page and the Peking duck in the previous snippet.

A flock of flying ducks is a 'team of ducks'. When they are on the water we call them a "paddling of ducks."

However, everyone else seems to refer to them a "flock of ducks", whether they are flying, swimming, or on land.

In England, in the sport cricket, a batsman who is out without scoring is said to be out for a duck.

Here is an unusual word to throw into your conversation - "anatine", it means duck-like. "Lame duck" was originally an 18th century term for investors in the stock market who could not, or would not, pay their brokers.

Later in 1926 a Wisconsin newspaper, wrote the heading: "Making a lame duck of Coolidge".
Calvin Coolidge would be the first of many American presidents to be saddled with the epithet - Lame Duck President.

Today, Obama is a Lame Duck President who takes a lot of trips abroad while his administration shreds the Constitution at home! 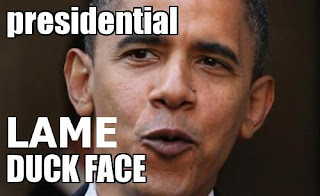 Because of their familiarity and comic nature, ducks are often featured as fictional characters.

This shows the power of hype, and the way in which mundane facts are exaggerated, take out of context, and distorted.

What happened back in 1977 was that Youth Board in Helsinki decided not to subscribe to the Donald Duck comic.

As on off-the-cuff remark one of the committee members commented that Donald Duck did not wear pants.

The rest as they say is history - or in this case Internet mythology.


Eighteen Madagascan pochards - the world's most endangered duck - have hatched in a captive breeding centre. This brings the world population of the ducks to just 60.

Scientists are studying the remaining wild population closely, in order to understand the reasons behind the species' decline and to determine the right conditions for releasing birds back into their natural habitat. The event was held on the river Thames at Molesey Lock, near Hampton Court Palace, in London.

The stretch of river was cunningly selected so that it took about 2½ hours to drift down the one-kilometre course.

Unfortunately, the 2010 race was postponed.

The prize fund generously stretched to include the next 29 ducks to finish. It costs £2 to adopt a duck, that's about $3 US Dollars.

The event could raise as much as £200,000 for charity. And that's about $302,500.00 US Dollars, which is no small amount of money - unless of course, we're talking about one of the Obama's monthly vacations which run into the Millions of US Dollars each month.

"The Great British Duck Race" is said to be the largest charity duck race in the world.
We have to say that a plastic duck race is a fun way to involve a community in fund raising.

It was reported from an unsubstantiated source that a plastic duck race in Chicago had to be abandoned when someone tried to substitute a "ringer", a plastic duck with a tiny outboard motor.

While a miniature motor in a duck is far-fetched idea, there supposedly was a Duck race in New York where a plastic duck was filled with baking powder with a tiny hole at the rear.

The idea was that the baking powder would react with the water to produce carbon dioxide, which would propel the "ringer" faster than the rest.

The problem was that when filled with backing powder, the duck was much lower in the water the rest and soon drew attention.

The other problem was that there was no way of controlling the direction the duck was propelled - unless you installed a radio controlled rudder!

A duck, named Bengbeng, [apparently translates as 'Silly'] has become a celebrity for its singing, dancing and counting abilities according to the Dahe Daily.

Its owner, Du Xinai of Xingxiang city, China, takes the duck with him when he goes to the local agricultural market to buy vegetables each day. This funny duck can be seen wearing a small red scarf and a pair of tiny shoes.

"If you ask him to sing, he quacks rhythmically while shaking his head and body. He quite enjoys it. If you put up one finger, he quacks once, then twice with two fingers, and so on."

Du says "Bengbeng is also a good citizen, and always waits for the traffic lights."

Bengbeng has become quite a star. Everywhere he goes, people welcome him like a "Super Star."

Only in America - Duck Gets 'Order of Protection'

A pet duck named Circles, who was shot and wounded with a pellet gun, has received an order of protection. New York introduced the protection law to deal with domestic violence.

This was the first time that an animal has benefited from such an order.

What happened was that the duck Circles was in its owner's backyard when a neighbour shot it through the neck.

The duck was successfully treated by a vet.

Meanwhile, the neighbour was charged with animal cruelty, and at the arraignment and Circles got an order of protection.

Ducks have bills, this girl has Duck Lips!

People making what is now termed Duck Faces on the Internet is a bit confusing.
It is believed that they are trying to be sexy and failing at it big time! 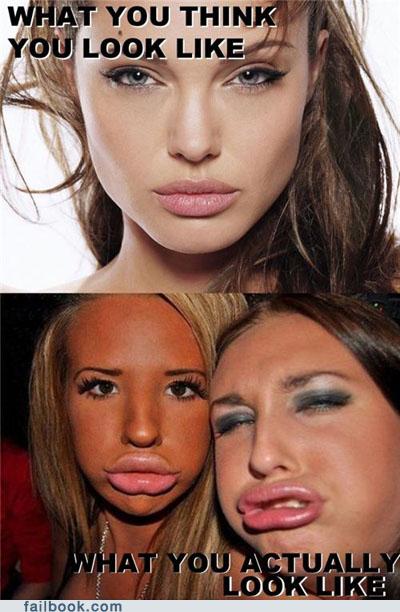 Finally duck funnies for the kids!

A farmer got tired of his old rooster waking him up late. So being the good guy that he was, he retired his old alarm clock and replaced him with a duck.

Yes, that's so he'd always wake at the "quack of dawn!"

Q: What do ducks get after they eat?
A: A bill!

Q: What do you call a crate full of ducks?
A: A box of quackers!

Q: Who stole the soap?
A: The robber ducky!

Q: What do you call it when it rains chickens and ducks?
A: Fowl weather.

Q: Why do ducks watch the news?
A: For the feather forecast!

Q: Where did the duck go when he was sick?
A: To the Ducktor

Q: What did the detective duck say to his partner?
A: I hope we Quack this case.

Q: What did the duck say to the banker?
A: My bill is bigger than yours.

Q: Which side of a duck has the prettiest feathers?
A: The outside!

Q: Why did the duck fly south for the winter?
A: Because it was too far to walk.

Q: Which animal grows down?
A: A duck

Customer: How much is that duck?

Customer: Okay, could you please send me the bill?

Shopkeeper: I'm sorry, but you'll have to take the whole bird.

Q: What do you call two ducks and a cow?
A: Quackers and Milk.

Q: What do you get if you cross a duck with fireworks?
A: A firequacker!

A duck walks into a pharmacy and says, "Do you have any chapstick?"

When the pharmacist puts it on the counter, the duck replies, "Thanks, just put it on my bill."

Q: What's another name for a clever duck?
A: A wise quacker!

Until later, thanks for visiting my blog!