Attack of the Insensitive Rodeo Clowns?

Before we talk about the supposed insensitivity of Rodeo Clowns, let's talk a minute about King Obama's Dog Bo who was airlifted to the King's family vacation spot.

King Obama commanded that his dog be airlifted via United States Marine Corps aircraft to the King's family vacation on Martha’s Vineyard - and it was promptly done!

By the way, more than Bo was airlifted to the King's family holiday on the Vineyard – also airlifted for his royal ass was his all-important "presidential basketballs".

As reported by The Telegraph, more than 70 hotel rooms, each costing up to $345 a night, have been booked for Secret Service agents.

The Obamas are staying in a $7.6 million, 5,000-square foot retreat on nine acres, which includes a basketball court, of course.

We should note that this is the first time Marine Corps aircraft, two Osprey helicopters were used to transport the King and his family.

One was for the Obamas, and one for Bo and the basketballs.

It must his way of enduring all of the cuts he's making to everyone else but himself.

But than again, it must be nice to be King!


Now as for those supposedly insensitive Rodeo Clowns?

The president of the Missouri Rodeo Cowboy Association has resigned after getting flak about a State Fair event in which a Rodeo Clown stirred up the crowd by wearing a mask of President Obama - and poking fun about the president being clown.

An attorney for rodeo announcer Mark Ficken said Tuesday that his resignation from the group is not an acknowledgment of wrongdoing on his part but rather a protest that the association has not banned the rodeo clown from its membership.

Ficken's resignation from the rodeo group comes as he tries to hold on to his job as superintendent of the Boonville School District.

The school system announced Monday that it is hiring an investigator to look into whether Ficken was involved in any "inappropriate conduct" during last Saturday's bull riding event at the Missouri State Fair in Sedalia.

Missouri's elected officials have denounced the rodeo clown act as "disrespectful" to Obama.

The event featured a clown wearing an Obama mask with an upside down broomstick attached to his backside who was positioned on the arena's dirt floor as if he were a dummy.

Another clown drew cheers from the audience as he asked if they wanted to see "Obama run down by a bull" and made comments about the bull coming to get Obama.


Ficken's attorney said a rodeo clown wearing a microphone - not Ficken - orchestrated the act and made most of the comments about a bull charging after Obama.

The Missouri State Fair said Monday that it has permanently banned the clown from performing at the fair. Imagine that!

The rodeo association, which was responsible for the event, has not publicly said what -- if any -- action it has taken against participants.

"When he found out that the association had no plans to remove the rogue clown from its membership ranks, (Ficken) felt that the better part of valor - given what was said - was to resign from the association," said his Ficken's attorney, Albert Watkins.

"He was at our house the next day for Sunday dinner and told us that he thought people took it wrong - that it was supposed to be a joke," said his cousin, Chrissy Gessling, of Slater, Mo.

Tuffy Gessling has not responded to Associated Press requests for an interview made through Facebook, his cousin and a friend.

So where's the problem?


While there is no written law, we may have finally reached a place in America where it’s forbidden to publicly mock the king president of the United States — of course, that's assuming that the president is black (or half-white) and a Democrat.

How about this picture of a liberal protester wearing a Bush mask with what's supposed to be blood all over his hands?

No outcry from the left? Imagine that?

But wait, Bush was white and a Republican - to the left even a lynching would have been OK!

In fact, it was reported that death threats against President George W. Bush were not even investigated as they are now since President Obama was elected.

The left's outcry over a rodeo clown putting on an Obama Halloween mask is laughable if it weren't for so many people getting their panties in a bunch over this.

Farmers and ranchers are having there private information distributed to anti-agriculture liberal environment extremist groups -- by Obama's EPA.

Conservative groups and citizens are being denied tax-exempt status by Obama supporters in the IRS.  Yes, that is an illegal act.

Over 2,217 semi-automatic AR-15 style rifles were handed over to Mexican Drug Cartels by the Obama Justice Department.  Yes, that is an illegal act.

The IRS and the GAO have spent millions of taxpayer dollars on lavish conferences.

Americans are being spied on by the NSA, the FBI, Homeland Security, and only God knows who else, all condoned by the Obama administration.

The president not refuses to even look at any favorable report about the Keystone XL Oil Pipeline because he is a slave to his liberal environmentalist donors.

Four Americans were killed in Libya while assets that could have kept them alive were told to "stand down" and no one in the Obama administration can fine the person who did that -- subsequently getting four Americans killed.

But wait, the left is not upset with any of these - yet they are about a rodeo clown wearing an Obama Halloween mask!

I ask you, is this a little insane or what?

Talk about absurdity, the man behind the mask has been permanently banned from performing at the fair ever again, as reported by the St. Louis Post-Dispatch.

Missouri State Fair officials barred the rodeo clown from ever performing at the fair again and are requiring that “all officials and subcontractors associated with the association must participate in sensitivity training,” the Post-Dispatch noted.

Why is it that Republicans and Conservatives have to attend "Sensitivity training" over something like this, yet Democrats and Liberals don't when the situation is turned around and they step way over the line.

Not just have a little fun at President Obama's unfavorable ratings, but Liberal get nasty!

As stupid as it is, liberal state lawmakers in Missouri are also demanding an investigation after threatening to cut funding for the fair, an annual event that receives state tax dollars.

Politicians and the national media jumped all over the incident, deeming it "inappropriate and disrespectful."

So where were the Democrats back in 1994 when a rodeo dummy wearing a President George H.W. Bush mask, propped up by a broomstick, was employed in the exact same was as a decoy during the bull riding at that rodeo.

Why didn't anyone demand resignations and investigation back then?

Could it have been because the left is sensitive and overly protective because President Obama is half-white/black and a Democrat?

One member of the Missouri Rodeo Cowboy Association who was at Saturday’s event told the Associated Press that there was nothing offensive or unusual about the rodeo clowns actions — he was trying to look like a dummy and that rodeo clowns have long performed such acts, often imitating sitting presidents.

“The joke is not that it was the president,” he said. “They drag out this person dressed like a dummy and all of the sudden this dummy just takes off running. That’s what’s funny.”

The only difference between then and now is the hyper-sensitivity and double standard that applies to the first black president.

Hyper-sensitivity that was on full display when the apparent Obama supporter who drew attention to the incident, Perry Beam, said "it felt like some kind of Klan rally you’d see on TV," as reported by the USA Today.

Yes, the "race card"! And no, I don't think the left has gotten the memo that the "race card" means absolutely nothing simply because it is worn out.

Like the double-standard and the denial that Democrats find themselves enjoying, all this talk about race is getting old.

Democrats on the Left cannot understand how Americans could care less what color Obama is or isn't. And frankly, since the Democrats are the only ones concerned with race at every turn - I can't help but wonder why they don't understand that race just doesn't matter?!

Fact is, Americans believe Obama's policies suck! It's just that simple, his policies are not good for Americans.

You'd think, that that is simple enough that even a Democrat would understand it.  His policies scare Americans. 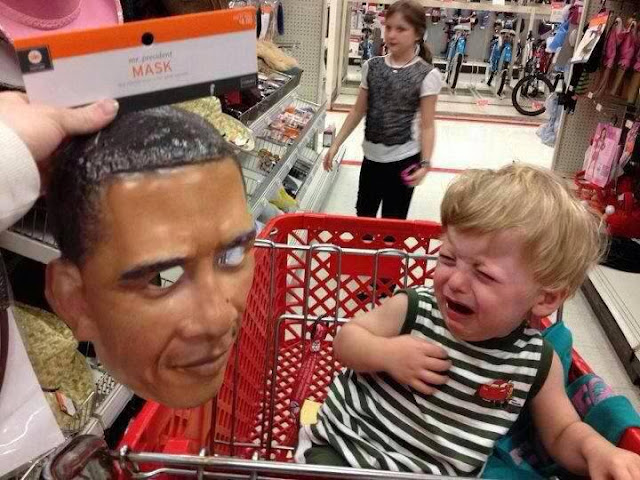