Our Odd Addiction To Outlaws 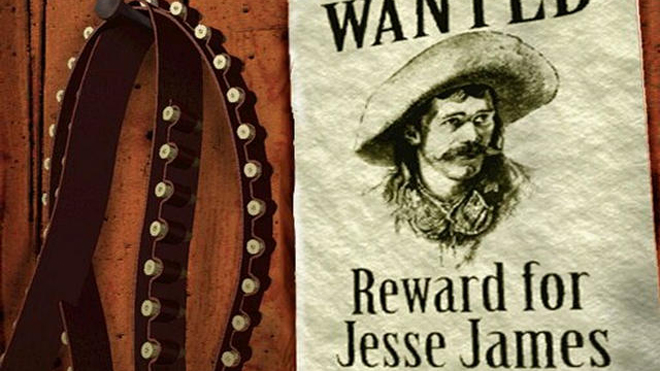 “It is one of the characteristics of human nature to worship at the shrine of anyone who excels in any line, let it be for good or for evil.” -- Wayman Hogue, Back Yonder, 1932

On April 19, 1882, the Irish writer Oscar Wilde looked out of his hotel room window in St. Joseph, Missouri, at a large crowd of people gathered around a small house on a distant hilltop.

“It is the house of the great train-robber and murderer, Jesse James, who was killed by his pal last week,” Wilde wrote to a friend, “and the people are relic hunters.”

Wilde marveled at the prices Jesse’s possessions brought at public auction. A chromolithographic print “of the most dreadful kind” that had hung in the outlaw’s home sold for a price that “in Europe only an authentic Titian can command, or an undoubted Mantegna.”

Jesse’s celebrity status, which far outshined Wilde’s, baffled the Irishman. “The Americans are certainly great hero-worshippers,” he observed, “and always take their heroes from the criminal classes.”

The hero-worshipping Wilde encountered in St. Joseph was just the beginning. In the years to come, dozens and dozens of books, dime novels, and eventually movies, about Jesse and Frank James were produced to meet the American public’s ravenous appetite for such fare. It was the mythic Jesse that I admired, the audacious gunslinger who was more Robin Hood than ruthless killer, more Tyrone Power or Robert Wagner than Brad Pitt.

“[T]he men and kids never tire of reading about this king of outlaws,” said one newsstand proprietor in 1891, who claimed to sell three times as many Jesse James books as anything else he stocked.

Nearly seventy years later, as a child during the 1960s and early 70s, I counted Jesse James as one of my heroes, too. Of course, I grew up in northwest Missouri in the heart of Jesse James country. And it was the mythic Jesse that I admired, the audacious gunslinger who was more Robin Hood than ruthless killer, more Tyrone Power or Robert Wagner than Brad Pitt (all of whom have portrayed Jesse in film). And I admit that I still despise Jesse’s assassin, Bob Ford, even though Ford’s bullet likely prevented more deaths of innocent people at Jesse’s hands.

But while Jesse may have been the king of outlaws at one time, it did not take long for claimants to the throne to rise up in the American imagination – notorious criminals who also were rehabilitated, romanticized, and worshipped.

Born in 1859, "Billy the Kid" (real name Henry McCarty) was a personable New Mexico gunman and small time cattle thief who achieved national attention in April 1881 when he pulled off a remarkable daylight escape from the Lincoln County courthouse jail by single-handedly killing his two guards with their own guns.

There were more headlines nearly three months later when Sheriff Pat Garrett hunted Billy down and shot him dead in a darkened room at Fort Sumner, New Mexico. But it took a bestselling book published forty-five years later to send Billy into the pop culture stratosphere.

Readers of Walter Noble Burns’ "The Saga of Billy the Kid" discovered a “Robin Hood of the Mesas” who “went his way through life without remorse, unracked by nerves or memories, gay, light-hearted, fearless, always smiling.”

In late 2010, New Mexico’s governor Bill Richardson considered granting a posthumous pardon to the Kid, claiming he wanted to fulfill a promise made by his predecessor, Lew Wallace, back in 1879. Richardson announced his decision – not to issue the pardon – live on "Good Morning America" (I was actually rooting for the Kid on this one).

The following year, an authentic tintype image of the outlaw sold for $2.3 million dollars. To date, more than sixty films have featured Billy the Kid as a character, with a miniseries about Billy currently in the works at Fox.

Movies, in fact, have done much to rehabilitate the criminals of our past – or maybe Hollywood has simply given us what we wanted. Who doesn’t immediately picture handsome, devil-may-care Paul Newman and Robert Redford in their mind when western outlaws Butch Cassidy and the Sundance Kid are mentioned, or Warren Beatty and Faye Dunaway when the particularly nasty public enemies Bonnie and Clyde come up?

Indeed, the cult of outlaw celebrity Oscar Wilde witnessed in St. Joseph shows no signs of letting up, and that worries me. There’s nothing wrong with the fascination we have for these social outcasts, but when it turns to infatuation, we risk losing sight of their true – and usually awful – crimes.

What future, brooding hunks, I wonder, might eventually portray accused Boston Marathon bombers Dzhokhar and Tamerlan Tsarnaev in a TV movie? Will some governor, a hundred years from now, consider a posthumous pardon for Lee Harvey Oswald or Charles Manson?

What we need are more efforts to remember the other sides of the stories – like they do in Northfield, Minnesota.

Every September, the people of Northfield hold a graveside ceremony for the cashier who thwarted the James-Younger gangs’ attempt to rob the First National Bank back in 1876. The cashier’s name was Joseph Lee Heywood, and for his bravery, he was murdered by Frank James with a bullet to the head.

Frank James rode off into history with his brother Jesse and was never punished for his crimes. Heywood left behind a wife and two-year-old daughter.

But 137 years later, the people of Northfield have not forgotten the real hero of this outlaw tale. We shouldn’t forget who the real heroes are, either.

Mark Lee Gardner is the author of "To Hell on a Fast Horse," about Billy the Kid and Sheriff Pat Garrett. His latest book is "Shot All To Hell, Jesse James, The Northfield Raid and the Wild West’s Greatest Escape" (William Morrow, August 1, 2013). He has written a broad range of books and articles focusing on the American West. He has also written a number of interpretive guides for the National Park Service on subjects ranging from George Custer to Geronimo.

Mark is also an award-winning musician who specializes in historic American folk music. He lives with his family in Cascade, Colorado. For more information please visit:   www.songofthewest.com.