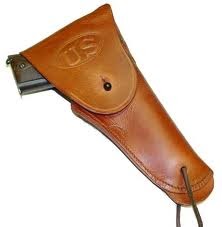 From your letters, it's easy to see that you have questions regarding "the best" choice for a Home Defense gun.

Ever since vice president Joe Biden said get a shotgun, I've had readers ask me about the positives and the negatives of having a shotgun versus other guns.

The email that I receive shows a split between handguns and shotguns, with a few making a pretty good argument for having an AR-15.

Maybe it was my training as a United States Marine, but my attitude on Home Defense is the same as any situation where you need to defend yourself: Any weapon is better than no weapon, and anything can be a weapon.

Most of us already know about women being told to use their car-keys against an attacker in the advent of an emergency situation on the street. That is a good example of anything can be a weapon.

For our homes, hopefully we're a little more prepared than that. But before choosing "the best" weapon for you, you have to look at your living situation.

If you have a lot of kids coming and going at all hours of the day and night like a bus terminal, than your choices are extremely limited simply because you might not know if the person coming in the door is your kid or not.

I know someone who once lost his house key and decided to climb in through a window to get in. His wife almost made herself a widow because she was ready to shoot at the very moment that he finally realized that his wife was standing there with a gun in her hand.

And of course, there is the case of the husband who likes to stay out drinking with the boys till late before coming home. If he's one of these guys who sees no reason in announcing himself as he's stumbling in the door, he could have a problem waiting for him inside. And no ladies, no matter how mad you are, you can't shoot him just because you might really want to!

Other limiting factors are things such as if you live in an apartment or have roommates who come and go for example. So before figuring out what we need, we really have to assess our needs and choices.

As for living in an apartment, I'll be real frank and say that I think a small caliber pistol is the best defensive weapon in the way of firearm. Because of the concern about a round going through a wall and entering a neighbor's apartment, I think that that concern can be minimized with a small caliber firearm such as a .38 revolver and the right kind of ammo. And yes, ammo manufacturers actually make ammo these days that are designed to reduce travel upon impact.

The bullet design can produce large shallow wounds in flesh while failing to pass through structural barriers thicker than drywall or sheet metal. These qualities make it less likely to strike unintended targets, such as people in another room during an indoor shooting. Also, when it strikes a hard surface from which a solid bullet would glance off, it fragments into tiny, light pieces and creates much less ricochet danger.

So yes, if you want to put an assailant down with killing him in an apartment situation, it see Glaser Safety Slugs would work well in the right conditions like say an apartment. 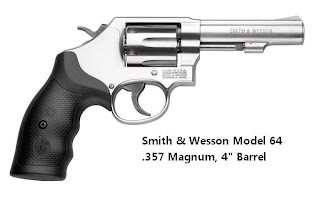 Having said that, whether you use some sort of new "frangible" round or the standard .158 grain .38 caliber bullet, a .38 revolver is ideal for home defense.

If there is a question as to what sort of ammo to use, some police department will help you to find out what ammo is authorized for department use, and which is very defensible in court.

For a residential house, ask yourself what we have to chose from in the way of a rifle, a pistol, or a shotgun? And yes, some will ask why not a baseball bat, a kitchen knife, or simply use the telephone?

Well, I've always believed that knives are used as a last resort.

It takes a lot of nerve to slice and dice someone. While fear is a great motivator, the problem with using a knife is that it is an up close and personal weapon that will bring us eyeball to eyeball with our assailant. And in that situation, the odds are only 50/50 that we will succeed in getting out without getting injured or worse.

The reason it's only 50/50 is the same as using a baseball bat -- if your assailant is a bigger stronger younger intruder, it could end up being used on you.

The telephone is great, but contrary to what liberals are trying to tell us -- no, it's not a weapon.

If an intruder is breaking into your home, instruct your wife to dial 911 and put the phone down so that the 911 operator can automatically locate where you are calling from -- then grab a gun and get on with a defense.

While I like shooting with one hand, and have been trained to do so while holding a flashlight or a radio or whatever else, most people need to dial 911 and put the phone down so that their hands are free to hold a firearm.

Whether you're using a pistol or shotgun or rifle, its my believe that a phone in your hands is just going to get in the way. Besides, there is nothing that the 911 operator can say to you to keep you safe at that moment. It is all up to you. 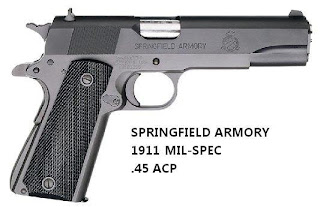 Why both? Because, while I'm comfortable with either handgun, my wife is more comfortable with the "less complicated" revolver.  Loaded with .38 caliber rounds, I'm fairly certain that she can handle using it very well. ﻿

﻿﻿﻿I also have a rifle and a shotgun that I keep in the ready. By about now, you're probably asking why so many choices?

Well, partly it's because of where my wife and I live. We live in the country. This is rural America, and not all of the intruders that I am worried about have two legs -- some definitely have four.

You see, while a pistol and a shotgun are great for close quarters when someone is breaking in the back door -- and a shotgun will give you some range and a wider pattern -- I need to have a rifle in case a predator is after my livestock.

For that reason, I keep a either my .30-30 Marlin or my .45-70 Marlin lever-action rifle ready in case of Mountain Lions and Bears and such. Though I own a semi-auto rifle or two, I'm most comfortable with my lever-action Marlin rifles for game. And yes, a .45-70 is a big round that will certainly put down a bear if I had to.

While I don't own one, I have been trained in the use of an M16 rifle. The civilian version is the AR15 rifle. I am not against owning one, I just have others that I prefer over an AR15. And even though that's the case for me, I really believe that the AR15 can be a good home defense weapon in rural areas. But frankly, I really don't think that I'd use one in an urban setting.

In a rural area, like say the area I live in where my nearest neighbor is over 200 yards away, when taking a shot at an intruder -- if you miss, your stray rounds, those misses, go into the landscape.

In an urban setting, where your neighbor's house can be a few feet away, when taking a shot at an intruder -- your stray rounds, those misses, go through a wall and into the next home and possibly into somebody's bedroom.

And yes, even the most well trained combat Marines miss now and then in the heat of battle. So knowing that fact, I've often worried about civilian law enforcement using AR15s. After all, there is no telling how many police officers can't hit the side of a barn.

This is the reason that police have traditionally used shotguns. With less range, a shooter gets less bullet travel. But the trade off is public safety. Besides, even a poor marksman, as many police officers are, can be proficient with a shotgun.

And yes, the weapon that won the West was the American shotgun. That shotgun, which was handed down from generation to generation in most American families, was used for hunting small game, birds, and family defense. Back then, as is the case today, a person with a shotgun didn't need a lot of practice to learn to hit what they aimed at, and shotgun were not complicated to use.


As for my choice of home defense shotgun? While I like side-by-side double barrel shotguns, I have owned a Mossberg 500 pump action shotgun for more than 30 years.

Like the 911 operator, an alarm system is of absolutely no use when you have a violent criminal breaking down your door.

Shame on you if you have nothing to protect yourself or your family with. The basic solution to that problem is to get a gun. And if you're uncomfortable using a pistol, get a shotgun. The Mossberg 500 would be a good choice.

Criminals don’t like guns when they are used against them. And yes, it is absolutely true that they don't like the sound of pump shotgun chambering a round and getting ready for business. ﻿Frankly, the racking of a pump shotgun speaks an international language which can be enough to deter even the most hardened of criminals.﻿﻿
﻿
It happened to my father when he was living in the residential area in the San Francisco Bay Area city of Hayward. One very late night, my dad woke up after hearing noise coming from the patio door which led to my folks' backyard.

He grabbed his pump shotgun and saw the silhouette of two intruders trying to jimmy the door open.

Standing back away from the door, he racked the pump shotgun to chamber a round.

He heard one say, "that was a shotgun!" as they jumped the back fence and ran away.

If the sound of a pump shotgun being racked to chamber a round doesn't work, knowing you can pull the trigger and accurately use deadly force to take care of one or more criminals is priceless in the scheme of things when it comes to home defense protection.

While I'm partial to pump action shotguns like the Mossberg 500 or the Remington 870, a side-by-side shotgun may be easier and less complicated for some folks.

Fumbling with safeties or a slide release can put you in danger. For that reason, as much as I like the pump action shotgun, the old standby side-by-side shotgun may be a better choice for some folks. But, either way you go, training is important.

As for prices? I believe a Mossberg 500 pump-action shotgun can be had for under $400. Stoeger side-by-sides are about the same price.

Of course, shop around for deals just like anything else. Also, watch for when they're on sale and you can safe a lot of money!

So all in all, as you can see, if you need to have a shotgun sitting in the back of a closet or over a door, a pistol in a drawer out of the reach of children yet accessible for quick recovery, a rifle in the back of the door for that midnight prowling big cat, you have options.

It's all a matter of wanting peace of mind in the event trouble comes your way. And yes, the guns shown above would be my choices to pick from.

Good luck with making your choice. 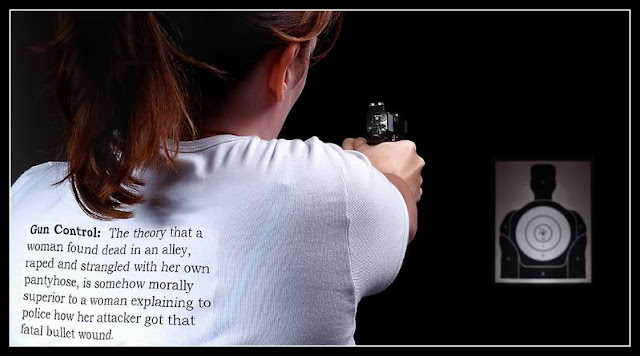