On Saturday morning, President Obama happily announced that his Administration has reversed standard American policy and is now negotiating with terrorists.

The outcome is that U.S. Army soldier Bowe Bergdahl would be freed in an agreement with the Taliban that would allow five extremely dangerous terrorists to be released from Guantanamo Bay.

Bob Bergdahl and his wife appeared with Obama at the White House for the announcement.

During the announcement Bob Bergdahl gave the standard Islamic greeting.

Yes, as I watched I couldn't help but wonder where that came from.  And yes, many Americans have also found that sort of strange from a man from Idaho.

Saying his freed son could not speak English, Bob Bergdahl said from the White House, "bismillah al-rahman al-rahim," which is Arabic for, "in the name of Allah the most gracious, the most merciful."

But that wasn't the only red flag that went up, as Bob Bergdahl later tweeted for more Guantanamo releases.

That's right, only hours after appearing at a press conference to give thanks for the freeing of his POW son in exchange for five top Taliban leaders, Bob Bergdahl returned to Twitter to promote a Guardian video in which family members lobby for the release of five Tunisians held at Guantanamo Bay.
Earlier, Bergdahl had apparently deleted a tweet reading, “I am still working to free all Guantanamo prisoners.” 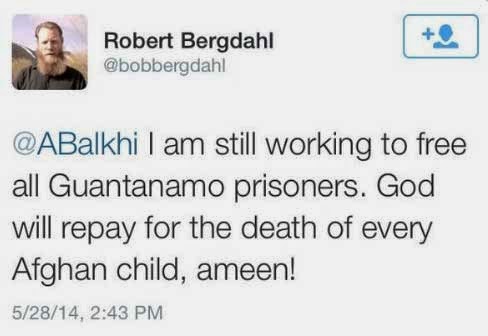 Robert Bergdahl also tweeted "Democracy is a cult in the West. I think most of afgs see law in terms of sharia not secular democracy, man centric laws"

This is all pretty fishy and many are now asking if America just released 5 extremely dangerous men who are wanted for War Crimes in exchange for a man who fellow soldiers are calling a "deserter" and "Taliban sympathizer."

Take a look at this News Story from CNN:

Fellow Soldiers call Bowe Bergdahl a Deserter -- Not a Hero

(CNN) -- The sense of pride expressed by officials of the Obama administration at the release of Army Sgt. Bowe Bergdahl is not shared by many of those who served with him -- veterans and soldiers who call him a deserter whose "selfish act" ended up costing the lives of better men.

"I was pissed off then and I am even more so now with everything going on," said former Sergeant Matt Vierkant, a member of Bergdahl's platoon when he went missing on June 30, 2009.

"Bowe Bergdahl deserted during a time of war and his fellow Americans lost their lives searching for him."

Vierkant said Bergdahl needs to not only acknowledge his actions publicly but face a military trial for desertion under the Uniform Code of Military Justice.

A reporter asked Defense Secretary Chuck Hagel Sunday whether Bergdahl had left his post without permission or deserted -- and, if so, whether he would be punished.

Hagel didn't answer directly saying, "Our first priority is assuring his well-being and his health and getting him reunited with his family. Other circumstances that may develop and questions, those will be dealt with later."

After 5 years, what's next for Bergdahl?

Following his release from five years of captivity in Afghanistan on Saturday, Bergdahl was transferred to a military hospital in Germany.

A senior Defense official said Bergdahl's "reintegration process" will include "time for him to tell his story, decompress, and to reconnect with his family through telephone calls and video conferences."

Said Bergdahl's former squad leader, Greg Leatherman: "I'm pleased to see him returned safely. From experience I hope that he receives adequate reintegration counseling. I believe that an investigation should take place as soon as healthcare professionals deem him fit to endure one."

Another senior Defense official said Bergdahl will not likely face any punishment. "Five years is enough," he told CNN on condition of anonymity.

Conflicting details have since emerged about how the militants managed to capture Bergdahl. Published accounts have varied widely, from claims he walked off the post to another that he was grabbed from a latrine.

According to first-hand accounts from soldiers in his platoon, Bergdahl, while on guard duty, shed his weapons and walked off the observation post with nothing more than a compass, a knife, water, a digital camera, and a diary.

Soldiers Died Searching For Him

At least six soldiers were killed in subsequent searches for Bergdahl, and many soldiers in his platoon said attacks seemed to increase against the United States in Paktika Provice in the days and weeks following his disappearance.

Many of Bergdahl's fellow troops -- from the seven or so who knew him best in his squad, to the larger group that comprised the 1st Battalion, 501st Infantry Regiment, 4th Brigade Combat Team, 25th Infantry Division -- told CNN that they signed nondisclosure agreements agreeing to never share any information about Bergdahl's disappearance and the efforts to recapture him.

Some were willing to dismiss that document in hopes that the truth would come out about a soldier who they now fear is being hailed as a hero, while the men who lost their lives looking for him are ignored.

Many are flocking to social media, such as the Facebook page "Bowe Bergdahl is NOT a hero," where they share stories detailing their resentment.

A number of comments on his battalion's Facebook page prompted the moderator to ask for more respect to be shown.

"I challenge any one of you who label him a traitor to spend 5 years in captivity with the Taliban or Haqqani, then come back and accuse him again.

Whatever his intent when he walked away or was captured, he has more than paid for it."

Emails reported by the late Michael Hastings in Rolling Stone in 2012 reveal what Bergdahl's fellow infantrymen learned within days of his disappearance: he told people that he no longer supported the U.S. effort in Afghanistan.

"The future is too good to waste on lies," Bowe wrote to his parents. "And life is way too short to care for the damnation of others, as well as to spend it helping fools with their ideas that are wrong. I have seen their ideas and I am ashamed to even be American. The horror of the self-righteous arrogance that they thrive in. It is all revolting."

Bergdahl wrote to them, "I am sorry for everything. The horror that is America is disgusting."

A former member of Bergdahl's squad who has yet to identify his last name publicly but goes by "Cody" tweeted this weekend that before he disappeared, Bergdahl once told him, "If deployment is lame, I'm going to get lost in the Mountains and make my way to China."

Leatherman told CNN that Bergdahl "always looked at the mountains in the distance and talked of 'seeing what's on the other side.'"

Cody noted in his Twitter recollections a story that others from Blackfoot Company relay.

While soldiers were searching for Bergdahl, a platoon "came upon some children, they asked him have they seen an American. The children said 'yes, he was crawling on his belly through weeds and acting funny a while ago,'" according to Cody.

The platoon went to the village where the children said the American had gone. "Villagers said an American did come through the area and was wanting water and someone who spoke English," Cody shared.

Former Pfc. Jose Baggett, 27, of Chicago, was also in Blackfoot Company, and said he was close to two men "killed because of his (Bergdahl's) actions."

He Walked Off -- He Deserted!

"He walked off," Baggett told CNN.

"He left his guard post. Nobody knows if he defected or he's a traitor or he was kidnapped. What I do know is he was there to protect us and instead he decided to defer from America and go and do his own thing. I don't know why he decided to do that, but we spend so much of our resources and some of those resources were soldiers' lives."

How Many Soldiers Died Looking For Him?
On August 18, 2009, Staff Sgt. Clayton Bowen and Pfc. Morris Walker were killed by an IED in the search for Bergdahl.

Staff Sgt. Kurt Curtiss was killed on August 26; 2nd Lt. Darryn Andrews and Pfc. Matthew Michael Martinek were killed after being attacked in Yahya Khail District on September 4; Staff Sgt. Michael Murphrey was killed September 5 by an IED at the Forward Operating Base, Sharana.

Moreover, other operations were put on hold while the search for Bergdahl was made a top priority, according to officers who served in Afghanistan in that time.

Manpower and assets -- such as scarce surveillance drones and helicopters -- were redirected to the hunt.

The lack of assets is one reason the closure of a dangerous combat outpost, COP Keating, was delayed.

Eight soldiers were killed at COP Keating before it was ultimately closed.

One soldier with the 509th Regiment, a sister unit of the 501st, told CNN that after Bergdahl disappeared, the U.S. Army essentially was told to lock down the entire province of Paktika.

He described sitting in the middle of a field with his platoon, vulnerable, with capabilities and personnel mismanaged throughout the region. Different platoons ran out of water, food, and ammunition.

"It was unbelievable," the soldier said. "All because of the selfish act of one person. The amount of animosity (toward him) is nothing like you've ever seen before."

That Bergdahl was freed in an exchange for five detainees at Guantanamo Bay is a further source of consternation.

"I don't understand why we're trading prisoners at Gitmo for somebody who deserted during a time of war, which is an act of treason," Vierkant said.

If he did in fact walk off and was indeed an Afghan symapthizer who got American troops killed than he should answer for those crimes.

On Sunday, 18 Taliban members turned over Bergdahl to a Navy SEAL team near the Afghanistan-Pakistan border at about 10:30 a.m. ET.

“Bowe I love you. I am your father,” said his dad, Bob Bergdahl, in the couple’s roughly 20-minute press conference in Boise, Idaho, on Sunday afternoon.

“Please recognize we are on a mission... I'm so proud about how far you were willing to go to help the Afghan people.”

These comments have people wondering if there is more to this story than meets the eye?