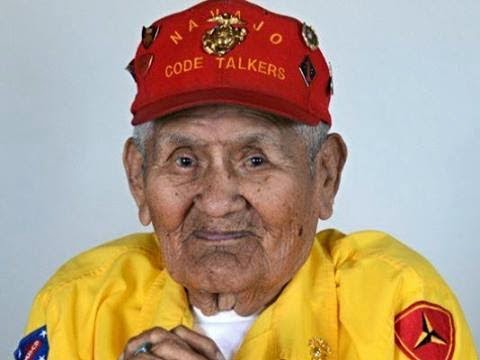 Chester Nez was proud of being a Marine and his service to his country despite having to keep it a secret.

Marine veteran Michael Smith wept Wednesday when he heard about the death of Chester Nez, the last of the original Navajo Code Talkers.

Smith, from Window Rock, who had met Nez several times, described him as a "quiet, humble" Navajo Marine.

Smith said that the passing of Nez — the last of the first 29 Navajo men who created a code from their language that stumped the Japanese in World War II — marked the closure of a chapter in the story of a special group of veterans.

Nez died Wednesday morning in Albuquerque, where he lived with his son Michael. He was 93. His family said he died of kidney failure.

He was a member of the all-Navajo 382nd Marine Platoon.

"It's the chapter about the first Navajo Code Talkers coming to a close," said Smith, 52, whose late father was also a Code Talker, but not one of the original group.

"People talk about it, and you never think it's going to happen in your lifetime. They are carrying the past with them.

"To see this in a lifetime, it's sad. I hope it makes us (Navajo people) stronger."

Smith said that creating the code "was a unit effort. As Marines we are all one. We fight as one with the tools that we are given."

Nez was attending the Tuba City Boarding School when the U.S. Marines came looking for young boys to help in World War II. Nez, in an interview three years ago, told The Arizona Republic he signed on with other friends because they were eager for an adventure that would allow them to see what was on the other side of the buttes.

Nez spoke about growing up in a family of Navajo shepherds. When his father saw that the government had ordered the herds to be thinned because the animals were overgrazing Navajo land, Nez was placed in school.

When he reached high school in the early 1940s, educators moved some students to Tuba City Boarding School, on the far western portion of the reservation north of Flagstaff.

The boys learned English in school. They knew little of the world beyond the sacred mountains that circled their homeland.

The military, ferrying troops to battle sites across the Pacific, was urgently seeking an undecipherable code to transmit classified information.

It had attempted to use various languages and dialects as code, but each was cracked by cryptographers in Tokyo.

Philip Johnston, a former Army engineer and the son of Presbyterian missionaries, had lived on the Navajo Reservation. He proposed an idea: Try using the Navajo language.

Written record of the language was scarce. Its syntax and grammar were elaborate. The spoken language used tones that were difficult for an untrained ear to understand

The language might prove harder for the enemy to break.

So on a spring day in 1942, Nez said, the Marine recruiters in red and white uniforms showed up at the school.

They were seeking smart Navajo boys who spoke their native language and understood English.

Nez remembered he longed to see the world beyond the reservation. He signed up.

But in the 2011 interview, Nez could not remember how he learned the code.

McClain collected first-person accounts from several of the original Code Talkers. Nez said words for the code came from everyday words used on the reservation.

According to the Republic article, the men easily attached familiar words to letters to create a code alphabet.

More challenging, McClain wrote, was devising a code to represent military equipment such as ships, planes or ranks of officers. The men struggled to describe war objects they had never seen during their lives on the reservation.

The code worked. The Japanese couldn't decipher it. After that, the Marines used several other groups of Navajos during the war to work on the code, which played an important role in defeating the Japanese.

After the war, the original Code Talkers quietly returned to the Navajo Reservation and never spoke of the mission they completed until the late 1960s.

The men became known as the original Navajo Code Talkers.

Their lives were also celebrated in parades, newspaper articles and books. They also traveled to schools and around the country to retell their stories.

Jean Whitehorse, 65, from Smith Lake, N.M., worked with the association for 12 years.

She served as secretary, helping the group get established. Whitehorse also is the daughter of the late Edmund Henry Sr., who also enlisted in the Marines during the war and worked with the code.

"Each Code Talker had different stories because they were in different classes and fought in different areas," Whitehorse remembered.

"The first 29 were put into one room and told to create a code. The men, like Chester, told me 'even if we spoke Navajo, we would not understand the code.'"

Whitehorse also collected signatures from the reservation on behalf of the Code Talkers to receive recognition from Congress.

"I learned the men took their mission seriously; it was sacred to them," Whitehorse said.

"People often ask, 'What if our own Navajo saad, the spoken Navajo, was not used?' Where would we be today?'"

The proclamation said Nez, with the 382nd Platoon in the U.S. Marine Corps, saw combat in battles of Guadalcanal, Guam, Peleliu and Bougainville during World War II.

Nez is survived by his son Michael and other family members.

Michael Nez, a Navajo artist, described his father as strong-willed. The final conversation the father and son shared was Tuesday night, when Nez nodded and smiled that he understood the family was with him.