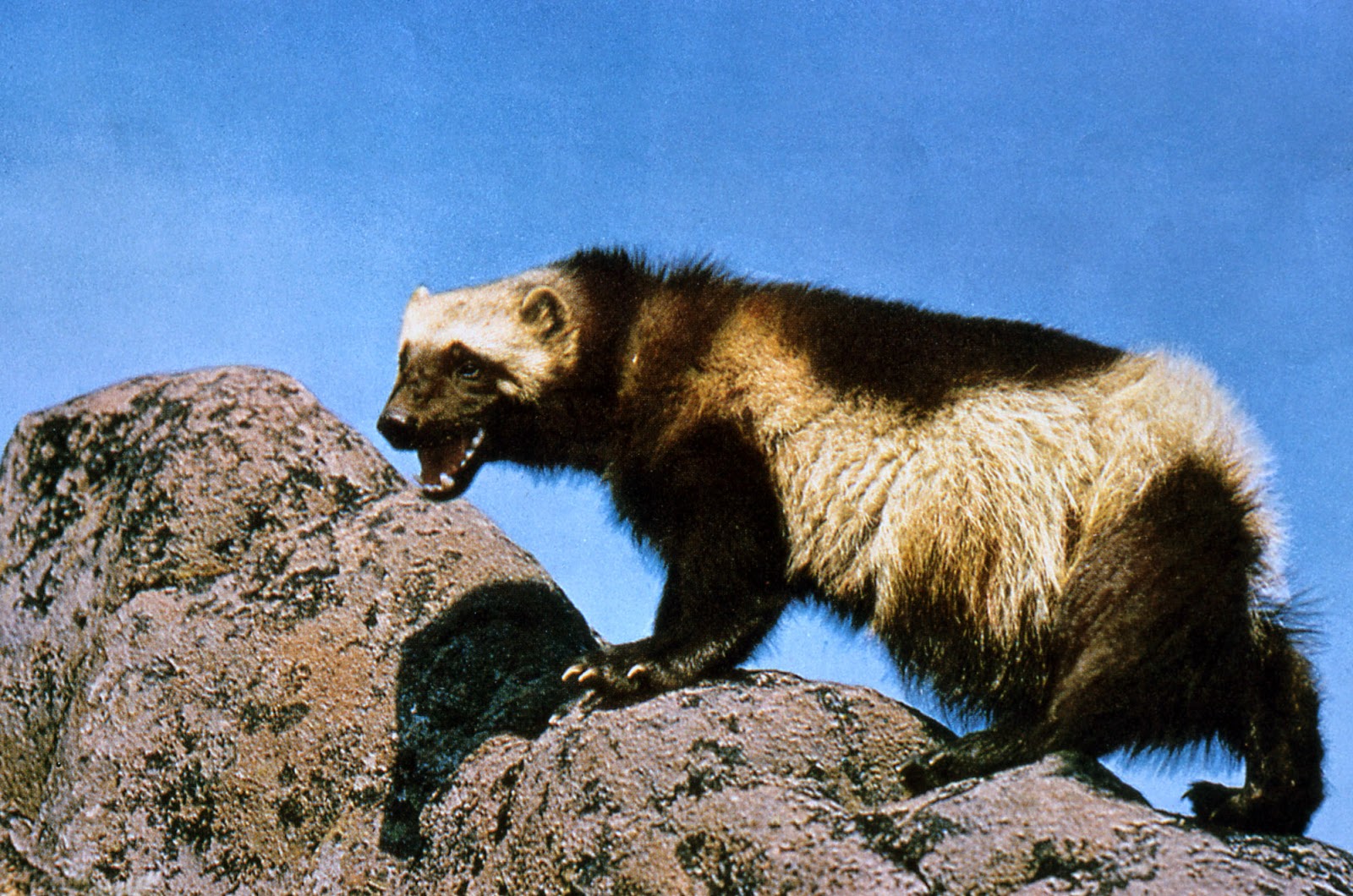 For some reason, folks have been requesting this. So I'm reprinting a story that I first published in a June 2012 RANDOM SHOTS article.

The story is about a hiker who took a picture of an animal in California that's not supposed to be in the California wild -- a wolverine.

Called "skunk bear" by the Blackfeet Indians, the wolverine is the largest terrestrial member of the weasel family and currently roams the rugged and beautiful Rocky Mountains and North Cascades in the western U.S. -- including California.

Supposedly, the last wolverine was seen in California back in the 1920s. Since then, there have been all sorts of claims of sightings -- there were a number of sightings in this area from 1960 to 1974 -- but no solid proof.

Then on February 28th of 2008, a Oregon State University graduate student's remote-sensing camera appears to have photographed a wolverine, making it California's first substantiated wolverine sighting since the 1920s.

The Oregon State University snapped a photo of a California Wolverine (Gulo gulo luteus) north of Lake Tahoe between Truckee and Sierraville in the Tahoe National Forest.

This is the first proven detection of a wolverine in California in 86 years.

The last California Wolverine was supposedly shot dead in 1922.
Katie Moriarty was trying to get a shot of the American marten, but her research project probably is getting more attention now, thanks to the accidental grainy shot.

Here's how the U.S. Forest Service describes the wolverine, and the photograph:

"The North American wolverine is the largest member of the weasel family. Adult males weigh 26 to 40 pounds, while females are 17 to 26 pounds. It resembles a small bear, with a bushy tail and broad head. Its diet includes carrion, small animals, birds, insects and berries.

U.S. populations are found largely in the Northern Cascades in Washington, and Northern Rockies in Montana and Idaho.

The nearest known resident population is about 900 miles north of the Tahoe National Forest in Northern Washington."

They are a larger cousin to otters, weasels and mink, the wolverine has a broad head, small eyes and short rounded ears with dark brown fur, and often has a lighter-colored face mask and stripe running down both sides of its body.

Typically they weigh less than 35 pounds, the wolverine is powerfully built and has short legs with wide feet for traveling across the snow.

Wolverines have unique coloration patterns on their face, neck, and chest that can allow researchers to identify individual animals based on photos showing the patterns.

Wolverines are also exceedingly rare, with scientists estimating that fewer than 300 wolverines may live in the lower 48 states, possibly fewer.

Wolverines are opportunistic feeders and eat a variety of foods depending on availability.

In the winter they primarily scavenge dead animals, while in the summer their diet consists mainly of smaller mammals such as porcupines, hares, marmots and ground squirrels.

They can also take down much larger animals, including caribou and moose, when circumstances such as deep snow are in their favor.

It is easy to mistake other animals as a wolverine. Other species that may be commonly misidentified as wolverines include the American badgers and marmots.

Wolverines in the Lower 48 live in rugged, remote country, spending most of their time in high elevations near or above timberline.

Further north in Alaska and Canada, wolverines occur within a wide variety of elevations in alpine, boreal and arctic habitats, including boreal forests, tundra and western mountains.

Historically, wolverines once lived in the northern and southern Rocky Mountains, Sierra Nevada Mountains, and North Cascades Mountains, as well as in parts of the Midwest and the Northeast.

Today, most wolverines in the Lower 48 can be found in portions of the North Cascades Mountains in Washington and the northern Rocky Mountains in Montana, Idaho, Wyoming, and in Oregon.

There have been lone individuals found in Michigan’s forests, the southern Rocky Mountains in Colorado, and the Sierra Nevada Mountains in California.

While many carnivores eschew feeding on bones, wolverines have extremely strong teeth and jaws that can break and eat meat and the bones - fresh or frozen!

Wolverines do not hibernate and are well-adapted for winter existence, with extremely dense fur, large snowshoe-like paws that allow them to stay on top of deep snow, and crampon-like claws that enable them to climb up and over steep cliffs and snow-covered peaks.

Wolverines are highly effective scavengers, with their keen sense of smell, strong teeth that crunch up bones, and their legendary ability to travel year-round through extreme alpine environments and over extraordinary distances.

Wolverines have been documented traveling great distances, often going right over mountains instead of taking the easy way around.

Individual wolverines may move more than 18 miles in one night. One male wolverine near Yellowstone traveled more than 500 miles in 42 days!

They naturally occur at low population densities. Yet, surprisingly, wolverines have a social side.

Male and female territories overlap each other, and they have strong family bonds. A male wolverine will interact with his kits even after they have struck out on their own.

Attempts have been made for decades to photograph wolverines in California, according to Bill Zielinski, a Forest Service scientist with the Pacific Southwest Research Station and an expert at detecting wolverines, marten and fisher.

They may also use dogs trained to find wolverine scat. Scientists have found dogs to be three and a half times more successful at detecting rare carnivores than remote-controlled cameras in forested areas like the Sierra Nevada Mountains.

Zielinski said hair and scat samples would contain DNA that can be analyzed to determine where the animal originated.

Wolverines have large home ranges that vary greatly depending upon gender, age and food availability.

In order to avoid interference with ongoing studies, Forest Service officials are not releasing the exact location where the wolverine was photographed.

The agency’s regional forester for California has listed the wolverine as a sensitive species, and the 2004 Sierra Nevada Forest Plan Amendment directs the Forest Service to conduct an analysis to determine if activities within 5 miles of where a wolverine was detected will affect the species.

Back in 2008, Tahoe National Forest Supervisor Tom Quinn said, "This is an exciting research discovery, both for its scientific value, and as a demonstration of our success in forest management. For now, we on the Tahoe National Forest have more questions than answers. We have initiated discussions with researchers about where this sighting occurred and how this could affect management of the National Forest. We are also consulting with wolverine experts and forest managers where wolverine populations occur, and gathering current literature and studies. As we learn more, we will assess which projects and activities, if any, might be affected."

On March 10th, 2010, it was reported that for the third year in a row, biologists in California have spotted a wolverine in forest land in California's Sierra mountains.

The species had been extinct in  the state for over 90 years before this male showed up, the the surprise and excitement of wildlife biologists.

On June 7th, 2012, it was reported that a Hiker photographed another wolverine.

Despite a long career studying animals and looking for wolverines, biologist Tina Mark says she would only get close to the stuffed one in her office.

"The fact that one showed up in our backyard, not too far from human habitation to me is a miracle. It's like finding a needle in a haystack," said Tina Mark, Tahoe National Forest biologist.

That's what mark has to say about the find David Messa made in May, during his own three-day quest for solitude - a solo hike near Lake Spalding in the Sierra.

"You know, the first day, I actually saw a bald eagle. I thought well, is the trip gonna get any better than this?” said David Messa.

It did get better, with a snapped image of a wolverine now confirmed as such by the California Department of Fish and Game.

For Mark, Messa’s find may help validate a hunch.

"My hope long-term is to find out if more wolverines live in California. I've long thought they lived in California," said Mark.

For the rest of us it's a tangible piece of the majestic mystery that draws so many out into the wilderness in the first place. To see first hand, all of nature's wonder.

But still, be careful. A real wolverine’s ferocious claws are just one of its distinctive characteristics along with the light-colored stripe that wraps around its body.

Wolverines are big, secretive weasels with bad attitudes, but that doesn't stop some people from getting awfully excited about them.

And yes, I can understand why that's the case -- especially since we haven't seen one in California in about 90 years!