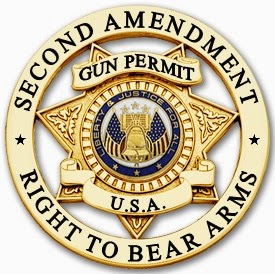 For a long time now, many of you have written asking me my choices for the 10 Best Conceal Carry Handguns. Well, here is my list.

For those of use who believe that any gunfight over 5 rounds is a full fledged Firefight, and since statistics show that an average of only 3 rounds within 5 to 7 feet are ever fired in a Self-Defense situation, these may be the ultimate backup and concealed carry handguns.


Keeping in mind their purpose, Personal Protection, when ranking them, I considered ease of use, concealability, weight, power, and cost. I also took into consideration whether the handgun would be good for men and women, or really only men and maybe not for the average woman.

While I am a believer in knock-down power, it has been my experience that having any gun is better than having no gun in a life and death situation. Because I've seen small calibers deter an assault as well as large calibers when the goal is to make the threat go away, these handguns fit the bill for both men and women. 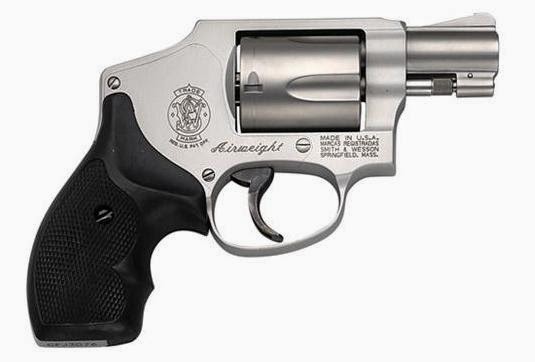 The Smith & Wesson J-Frame has become the most popular small frame personal defense revolver on the market. With decades of reliable performance to its credit, the J-frame line offers models capable of firing .22 LR, .22 Magnum, .38 S&W Special, and the more powerful .357 Magnum loads.

Smith & Wesson offers these revolvers from its production line, M&P, Pro Series, and Classics lines in three different hammer designs: internal, exposed and shrouded. And yes, the S&W 642 Airweight in .38 Spl+P is everything you could ask for in a concealed carry weapon.

The 642 is one of the most popular personal defense and conceal and carry weapons for a reason — it is light (15 oz.), powerful, accurate, safe, and extremely reliable.

Please don't let the .38 Spl deter you from buying one of these pistols. Fact is, the .38 Special was the standard service cartridge of most Police Departments in the United States from the 1920s into the early 1990s.

Noted for its fine accuracy and manageable recoil, it remains the most popular revolver cartridge in the world more than a century after its introduction. And yes, for women who want something that they can handle confidently -- this no frills, extreme uncomplicated Old School .38 is the way to go.

The S&W Model 642 Airweight is very hard to beat and reasonably priced. Besides, S&W is known for their quality. 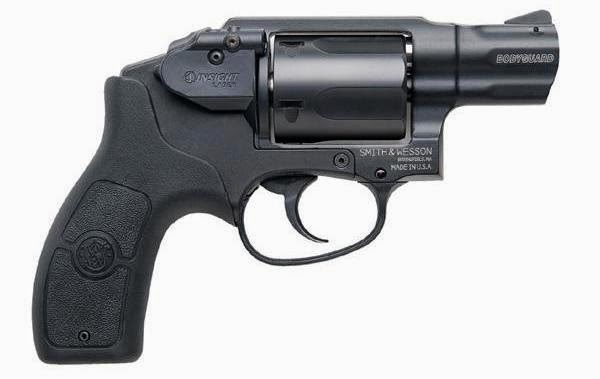 The S&W BODYGUARD series is the first in personal protection with integrated lasers. Yes, the laser is part of the difference between the S&W Model 642 and the S&W BODYGUARD 38.

Unlike the S&W Model 642 with its cylinder release in the left side as is most double action revolvers, the S&W BODYGUARD has a  push-button ambidextrous top-mount cylinder release. Besides being unique, I was genuinely surprised when I found the release very easy to use and get used to.

Smith & Wesson BODYGUARD personal protection handguns are designed and engineered specifically to include the latest in laser sighting technology for optimal accuracy.

INSIGHT Laser is a world leader in the design, development and manufacture of tactical lasers. The INSIGHT laser has 3 Modes: Constant-On, Pulse, Off. Plus 5 minute auto-off timer. Its battery life is 3 hours continuous on. And yes, the laser is user adjustable for windage and elevation with no disassembly required.

It is a Double Action revolver, with a 1 lb. trigger pull, an Internal Hammer, with synthetic grips.

Its overall length is 6.6" and weights 14.3 oz, which means its size and lightweight, and simple to use and featuring integrated laser sights, is the perfect piece of security for men and women who don't want something large and harder to conceal. 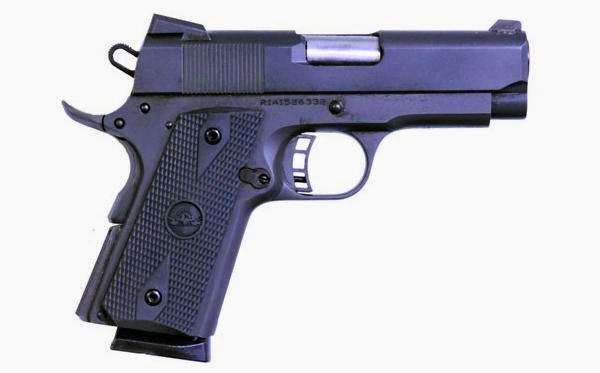 Concealable put certainly not as concealable as the S&W BODYGUARD is the Rock Island Armory series of M1911-A1 compact pistols. Now, while that is true, do not think that this handgun is the some as a full size M1911A1 because it is not.

Unlike Sigs or Clocks, these handguns are in fact single stacked and very slim pistol grips just as Mr. Browning designed the 1911 more than 100 years ago.

Add its 7+1 round capacity magazine, and we are probably not looking at a handgun suited for a women. Yes, while I love this handgun, that's just my opinion. For those of us who have to go Old School, like me, and want to pack a .45 ACP, this is one nice pistol. 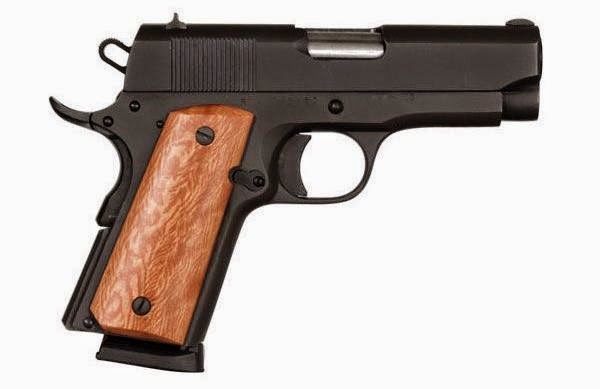 When I bought mine, I opted for the CS or Standard Compact model. And yes, I can report that it shot perfectly right out of the box. So for those of us who like a .45 ACP, a 1911, and a slim grip and overall pistol profile vs the bulky Glocks, this piece is perfect for concealed carry. And yes, the price is right. 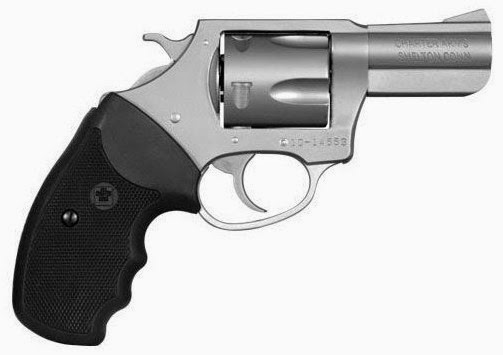 OK, here's another Old School concealed carry for you. While not as small as the S&W revolvers above, this handgun is small, very lightweight, and more powerful than a .38 Special. In fact, no other revolver this small and light has this much power.
Known for its rugged reliability and stopping power, Charter Arm’s Bulldog in .44 Special is a versatile revolver for personal or home protection.

They come with a variety of options such as their target, blue, internal hammers, and different calibers. The one above is shown in Stainless Steel, but they also come in Standard Blue. With a barrel length of 2.5”, this .44 Special is one of the larger revolvers to qualify for concealed carry.

We should note that U.S. Air Marshals once carried the Charter Arms Bulldog on flights during the 1970s. If I recall, the logic at the time was a big heavy bullet, fired from a lightweight reliable handgun, was the way to go in a close combat encounter. Which, of course, sounds like most confrontations where a firearm is needed. 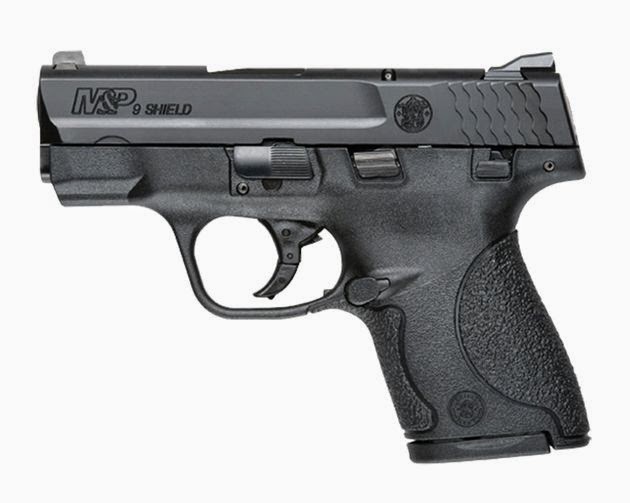 Smith & Wesson's M&P SHIELD comes in both 9mm and .40 S&W. It is a slim, concealable, lightweight, striker-fired polymer pistol.

With a 3.1-inch barrel, which contributes to an overall length of 6.1 inches and an unloaded weight of 20 ounces. The pistol is easily concealed with its slim one-inch profile and optimized 18-degree grip angle. For fast tracking and smooth target acquisition, the M&P SHIELD is standard with a 5.3-inch sight radius and has been enhanced with a short, consistent trigger pull measuring 6.5 pounds.

Featuring a quick and audible reset made possible by the striker-fired action, the M&P SHIELD allows multiple rounds to be placed on target both consistently and accurately.

The .40 that I fired was as accurate as can be right out of the box. It's a really sweet little protection piece that is very slim and extremely concealable. As for shooting it, while the .40 is "more gun" than the 9mm, it was easy to handle and functioned like a dream. In fact, I believe even a smaller sized women would find this comfortable to shot. 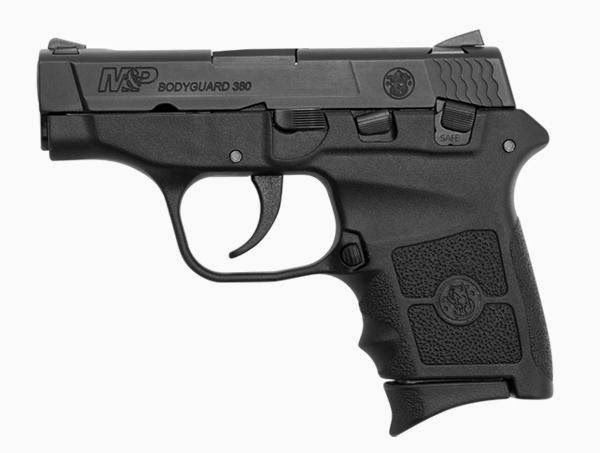 Combining popular M&P characteristics with existing BODYGUARD features, the new M&P BG380 offers consumers a uniquely engineered, lightweight self-defense pistol. It is compact, sleek and ergonomic. The M&P BG380 pistol also benefits from new fish scale serrations on the rear of the slide for ease of use and like other M&P pistols, ships complete with two magazines.

The new M&P BG380 is standard with a 2 ¾ inch barrel, which contributes to an overall length of 5 ¼ inches and an unloaded weight of only 11.85 ounces. Yes, about 12 ounces. Additional standard features include a rapid second-strike capability, thumb safety, take-down lever and stainless steel drift adjustable sights.

Colt .380 Mustang XSP is a small, lightweight and boast enhanced durability, reliability and accuracy, making it an ideal handgun for personal protection. With a loaded magazine, this handgun weighs less than one pound. Measured at 5.5 inches long and have a 2.75-inch barrel.

Ruger LCP 380 is compact at 6 inches in overall length with a 3.12-inch barrel, 4.5 inches in height and a narrow, pocket-friendly 0.90 inches in width. It weighs 17.2 ounces empty. The LCP 380 provides a 7+1 capacity, a manual safety, a loaded-chamber indicator and white-dot sights.

Folks, like many of the others, this is one of those very light just put it in your coat pocket small pistols that bad guys hate to find out that you're carrying. And yes, those who I know, who have one, rave about them because of the concealability, light weight, and reliability. 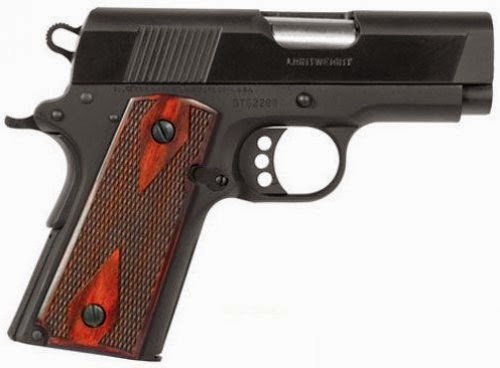 If a concealable pistols that packs a full size punch is what you are looking for, the Colt New Agent is it. The Colt New Agent is offered in the potent .45 ACP cartridge, yet at 22.5 ounces and a three inch stainless steel bushingless barrel. If you want light weight and a .45 ACP for a everyday carry, this is the ideal pistol for concealed carry.

The design incorporates a lowered and flared ejection port to provide the user with excellent accuracy and outstanding reliability.

OK, it has no sights other than a unique trench style groove sight. This design makes this compact .45 ACP a pistol that is snag free on the draw. In addition to this trench style sight, the Single Action New Agent is now available for the first time with Crimson Trace® laser grips emblazoned with the Colt logo. And by the way, the one that I fired shot nice right out of the box.

So, now you ask, which would I buy, the Rock Island Armory M1911 A1 CS Tactical Pistol or the Colt New Agent? The Colt New Agent is lighter and is snag resistant. But frankly, the one I looked at was over $1000.

I like the lightweight and smooth slide. Yes, I really do. But for the price, I can buy almost two Rock Island 1911A1 CS tactical pistols. So for the average person who lives trying to make ends meet but wants a great concealed carry .45 ACP, then the Rock Island is the way to go.

The Ruger LCR is a compact .38 Spl revolver built by Strum Ruger. The LCR acronym stands for "Lightweight Compact Revolver".

It incorporates several novel features such as a polymer grip and trigger housing, monolithic receiver, and constant force trigger.

At 13.5 oz (380 g), the LCR is nearly 50% lighter than the stainless steel SP-101, and about an ounce lighter than the S&W BODYGUARD. The frame is aluminum alloy and synthetic glass-filled polymer finished in matte black with Synergistic Hard Coat.

The LCR operates in double action only (DAO) as the hammer is concealed within the frame handle's fire control housing of the gun and cannot be cocked prior to firing.

In order to create a crisp and light trigger pull that is non-stacking, it features a friction reducing cam, a feature seldom found on double action revolvers which by nature of their mechanism normally have a very heavy trigger pull.

So there is my list of handguns that I believe are the best conceal carry guns available for us today.

While there are folks who may wonder why I haven't included a Sig or a Glock, and will disagree in as far as my ranking goes, these are the handguns that I feel would fit the bill better than others on the market at the present. Which, by the way, are the best bang for your buck!

Short of a full out assault on your person by hoards of crazies all armed to the teeth, I believe this and an extra speed-loader for a revolver or extra magazine for a semi-auto is all any one of us would need to deter the bad guys out there in real world situation. 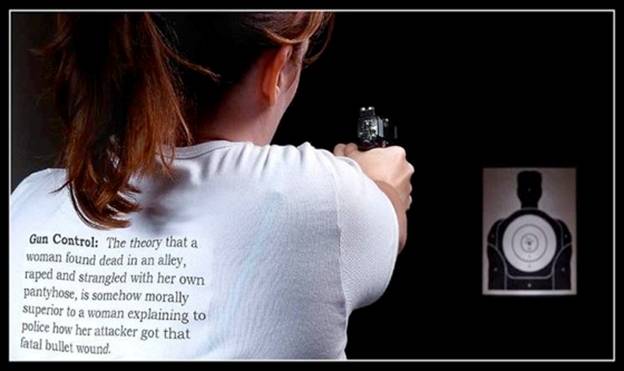