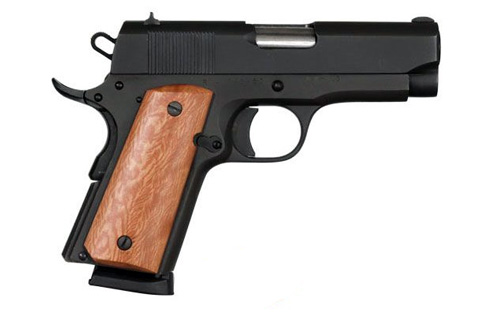 The Rock Island Armory 1911-A1 Officer meets all of the standards needed for a great conceal-carry weapon.

If local laws allow you to carry a concealed firearm, choosing the right handgun to defend your life outside of the home depends on many factors. While many only list factors such as the weapon's size, weight, caliber, and capacity of which all come into play, I also see factors such as operational knowledge, familiarity, and ease of use as paramount to choosing the right carry-weapon.

It would be a shame if one were to have a great hideout gun for their concealed carry-piece, but failed to pass rudimentary operating knowledge or no familiarity with the weapon to make it useful in a stressful situation.

I was trained in the Marine Corps with the M1911A1 pistol over 45 years ago, and have subsequently used one since then. For me, my choice of a 1911 fits my operational knowledge and familiarity with the weapon. And as for ease of use, the 1911 is very easy to use once trained in how to use it.

With 40 U.S. states having "shall-issue" concealed carry laws, and since many police and sheriff's departments are unable to respond in a timely manner, many law enforcement professionals recommend getting your concealed carry permit. With more and more citizens accepting responsibility for their own personal protection by obtaining a concealed carry permit, a good concealed-carry handgun is good to find.

After purchasing the Rock Island 1911-A1 CS, I waited the mandatory 10-day waiting period to pick it up. After picking it up, I went home and cleaned the packing grease off of it, and oiled it. It has been my experience that 1911's love oil.