Every once in a while I'll find something that is completely unacceptable.

Early last year, 2013, it was reported that a Professor at American River College in Sacramento was caught on tape giving an anti-Veteran rant.

In January of 2013, American River College Professor Tom Brozovich’s students had enough of his Liberal Extremism and actually walked out of his Art History class.

Like most liberals, no matter what they "teach", they use their class as a soap box to influence their captive audiences. And please, don't think that those sitting in classes are "captive" audiences.

I remember being in Chabot College in an American History class there back in the early 1980s, and finally walking out of a lecture because I couldn't take enough of the Leftist teacher giving the class.

Later when he asked me why I left, I told him that his anti-American, anti-Christian, anti-military remarks and rewrite of history might mean nothing to those students fresh out of High School, but I it was only a few years earlier that I had just spent 4 years as a United States Marine and didn't appreciate his hate filled comments.

He told me to "keep my Americanism and American flag outside" of his class, or take an incomplete and find another class. While knowing that dropping his class would set my date of graduation back, I did drop his class.

I left his class to those who saw him as a pillar of wisdom and refinement. I saw him as full of shit -- a man who should not have been allowed to teach anything.

And by the way, when I complained to Chabot College's administration about his anti-American hate filled rants -- nothing was ever done. It was simply dismissed.

Yes, it was my first experience with Liberals covering for other Liberals.

One student, a veteran, Shiloh David Helman, was one of the students who walked out on a lecture given by Professor Brozovich in January of 2013.

The walk-out took place after Brozovich went into an anti-Veteran rant.

"He told me that I’m the problem with America," Helman told FOX40.

After the leftist Professor was exposed for the scumbag that he was, another Iraq-era veteran gave his lecture tapes from the same art history class to FOX40 to demonstrate why he says he walked-out a number of times himself.

Among the statements that leftist Tom Brozovich made, he said, "Americans have been mislead to believe that the folks killed on 9/11 were all innocent victims. That’s not entirely true."

Yes, Brozovich can be heard saying that on the tape.

"They gave their lives to George Bush, fighting in his dirty war, then he wanted to pretend they never existed," Brozovich

American River College President David Viar told FOX40 that a professor’s role was to push students to think critically, but that the college also tries to "help students with their reactions to that."

"I told him how proud I was to be a veteran and that I go to do a job and defend this nation," Helman said.

Helman ultimately had his art history final graded by a different professor.

It is interesting to note that this isn't the first time this guy has shown himself to be the Leftist that he is. Brozovich’s reviews on Rate My Professor show the effects that he has had on his students.

At the time, 2013, one student wrote a review calling him a "Liberal Extremist."

One student recently wrote a review on Brozovich saying, "I may as well have been attending an anti Republican Party. At first it was just anti Bush but turned quickly into his personal perspectives on all republicans, I am Democrat, but WOW, I hope this guy has no firearms as you may see him in the news media. Hope not. I would not recommend this class to my worst enemy, stay clear, this guy is COO COO!"

In contrast, believe it or not, as sorry as it is, there are other students who wrote that its the best class they have ever taken. But frankly, the students who call him great also say that his class is an "easy A" if a student can put up with his cursing and rants.

Yes that's what I'd expect from a College or University -- brain dead ignorance!

Now while I expect that sort of behavior from a College Professor, especially since the vast majority of those teaching in our Colleges and Universities are Liberal Leftist Communists and Socialists who have secured their living among others of their ilk, I wouldn't expect their attitude from Americans who actually work for a living -- or from someone who I would assume has an appreciation for the blessing that we enjoy in America.

And frankly, I surely wouldn't expect it from a gun store owner. But yes, that's the case in Alabama where Michael Schuette's anti-Veteran Facebook rant has gone viral.

The Facebook rant makes the Alabama native look like an unappreciative fool at best. And at worse, well he's made himself look like as much of an ignorant ass as that liberal professor in Sacramento California.

It has been my experience, much like most others who are into guns, that I usually find that gun stores are run by good patriot folks who don't have a hateful bone in their bodies.

Yes, folks involved in owning and running gun stores are pretty patriotic in that they support the Constitution and the Bill of Rights, want less Government intrusion in our lives, and respect our troops -- both those serving and those who have served honorably.

Even if they themselves had never served, they are usually supportive and respectful of our troops. Well, the folks who own Outlaw Gun Repair and Hydrographing are just the opposite!

That is one place I would not give my business to even if they had the best buys around.

The Anniston Alabama man whose family owns the firearms business said his family has received as many as 20 death threats after comments he made about veterans "fighting and killing for profit" went viral. 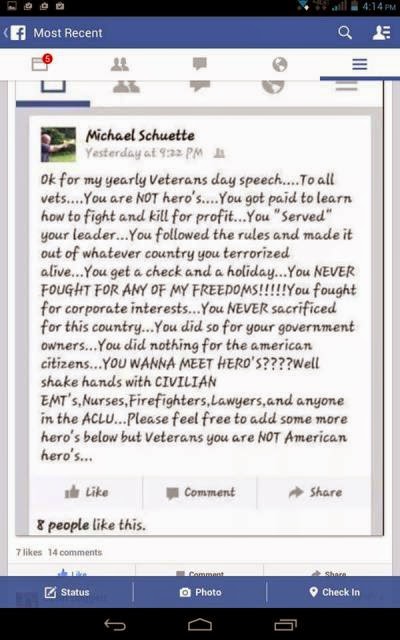 "OK, for my yearly Veterans Day speech...to all vets...you are NOT hero's. You got paid to learn how to fight and kill for profit. You "Served" your leader...You followed the rules and made it out of whatever country you terrorized alive...You got a check and a holiday. YOU NEVER FOUGHT FOR ANY OF MY FREEDOMS!!!!! You fought for corporate interests...You never sacrificed for this country...You did so for your government owners...You did nothing for American citizens...YOU WANNT MEET HERO's???? Well, shake hands with CIVILIAN EMTs, nurses, firefighters, lawyers and anyone in the ACLU...Please feel free to add some more hero's below but Veterans are you NOT American hero's."

Schuette's comments quickly made the rounds on Facebook and military-related sites.

Those commenting were quick to point out that Schuette owns Outlaw Gun Repair and Hydrographing and the couple serve as administrators of a Facebook group that specializes in the buying, selling and trading of firearms.
He has since removed the post, replacing it with the post below: 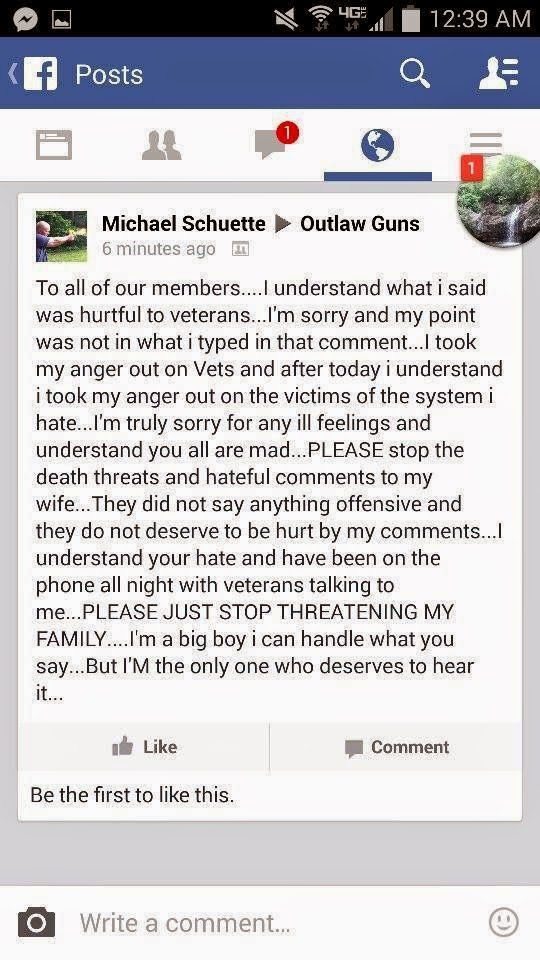 Schuette said he plans to step down from his position in his family business.

Comments on the company's website criticized Schuette and left no gray area as to how they felt.

"Next time don't bite the vets hands that feed your freedom of speech....they bite back," one posted on the company's website.

"I'm so glad all us worthless soldiers are willing to fight to defend your freedom of speech. As you can see, we also have freedom of speech. What's funny is even though you spit in my face I would die for you if necessary. Why? Because I'm a soldier."

Schuette, who of course enjoys our freedoms but did not find it a duty to serve in the military, said he has tried to explain his comments to the veterans who have called him.

His family has been threatened, Schuette said, but said he is not "a hateful person" and was simply saying he was tired of the government sending young people off to war.

Schuette said he has answering calls from veterans around the country, trying to explain his comments.

"I do understand my comment was very harsh. I sometimes say controversial things but I've never had anything like this," he said. "I took my anger out on the victims of the whole thing. I'm mad at the system that puts our kids out there to die."

The lack of appreciation coming from people like Schuette and his family is something to ashamed of.

While he is not ashamed of what he says and feels, he certainly should be ashamed of himself because not only is he ignorant and ungrateful -- but he is also hateful.

See no matter what he says now, we all know how he really feels. And yes, his real feelings for Veterans is hate. We know he hates veterans no differently than other liberals who have nothing but venomous animosity for our troops and those you have served.

While Schuette is not very apologetic about his stance, he is certainly a sorry individual.