The True Story of Thanksgiving -- by Rush Limbaugh 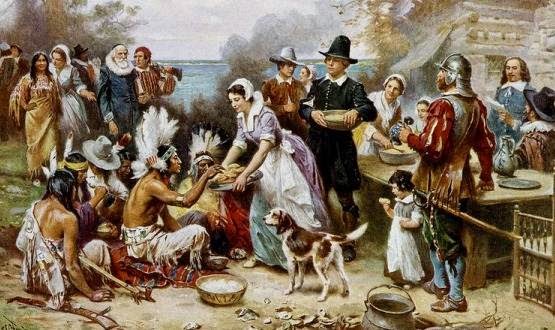 What is the story of Thanksgiving?

What I was taught, what most people my age were taught, maybe even many of you were taught, the Pilgrims got to the New World, they didn't know what to do.

They didn't know how to feed themselves. They were escaping tyranny, but they got here, and the Indians, who were eventually to be wiped out, taught them how to do everything, fed them, and so forth.

They had this big feast where they sat down and thanked the Indians for saving their lives and apologized for taking their country and eventually stealing Manhattan from 'em.

But that's not what really happened.

The story of the Pilgrims begins in the early part of the seventeenth century ...

The Church of England under King James I was persecuting anyone and everyone who did not recognize its absolute civil and spiritual authority.

Those who challenged ecclesiastical authority and those who believed strongly in freedom of worship were hunted down, imprisoned, and sometimes executed for their beliefs.

A group of separatists first fled to Holland and established a community. After eleven years, about forty of them agreed to make a perilous journey to the New World, where they would certainly face hardships but could live and worship God according to the dictates of their own consciences.

On August 1, 1620, the Mayflower set sail. It carried a total of 102 passengers, including forty Pilgrims led by William Bradford.

On the journey, Bradford set up an agreement, a contract, that established just and equal laws for all members of the new community, irrespective of their religious beliefs.

Where did the revolutionary ideas expressed in the Mayflower Compact come from? From the Bible.

The Pilgrims were a people completely steeped in the lessons of the Old and New Testaments. They looked to the ancient Israelites for their example.

And, because of the biblical precedents set forth in Scripture, they never doubted that their experiment would work.

But this was no pleasure cruise, friends. The journey to the New World was a long and arduous one.

And when the Pilgrims landed in New England in November, they found -- according to Bradford's detailed journal -- a cold, barren, desolate wilderness.

There were no friends to greet them, he wrote. There were no houses to shelter them. There were no inns where they could refresh themselves. And the sacrifice they had made for freedom was just beginning.

During the first winter, half the Pilgrims -- including Bradford's own wife -- died of either starvation, sickness, or exposure.

When spring finally came, Indians taught the settlers how to plant corn, fish for cod, and skin beavers for coats.

Life improved for the Pilgrims, but they did not yet prosper!

This is important to understand because this is where modern American history lessons often end.

Thanksgiving is actually explained in some textbooks as a holiday for which the Pilgrims gave thanks to the Indians for saving their lives." That's not what it was.

Here is the part that has been omitted:

The original contract the Pilgrims had entered into with their merchant-sponsors in London called for everything they produced to go into a common store, and each member of the community was entitled to one common share.

It was a commune. It was socialism. "All of the land they cleared and the houses they built belonged to the community as well," not to the individuals who built them.

Bradford, who had become the new governor of the colony, recognized that this form of collectivism was as costly and destructive to the Pilgrims as that first harsh winter, which had taken so many lives.

He decided to take bold action. Bradford assigned a plot of land to each family to work and manage.

They could do with it whatever they wanted. He essentially turned loose the free market on 'em.

Long before Karl Marx was even born, the Pilgrims had discovered and experimented with what could only be described as socialism. And they found that it didn't work.

What Bradford and his community found was that the most creative and industrious people had no incentive to work any harder than anyone else, because everybody ended up with the same thing at the end of the day.

But while most of the rest of the world has been experimenting with socialism for well over a hundred years -- trying to refine it, perfect it, and re-invent it -- the Pilgrims decided early on to scrap it permanently.

What Bradford wrote about this social experiment should be in every schoolchild's history lesson:

'The experience that we had in this common course and condition," Bradford wrote.

'The experience that we had in this common course and condition tried sundry years... that by taking away property, and bringing community into a common wealth, would make them happy and flourishing -- as if they were wiser than God. ... For this community [so far as it was] was found to breed much confusion and discontent, and retard much employment that would have been to their benefit and comfort. For young men that were most able and fit for labor and service did repine that they should spend their time and strength to work for other men's wives and children without any recompense."

What he was saying was, they found that people could not expect to do their best work without any incentive. So what did they try next?

"Every family was assigned its own plot of land to work and permitted to market its own crops and products. And what was the result? 'This had very good success," wrote Bradford,

"For it made all hands industrious, so as much more corn was planted than otherwise would have been."

They had miraculous results. In no time, they found they had more food than they could eat themselves. So they set up trading posts. They exchanged goods with the Indians.

The profits allowed them to pay off the people that sponsored their trip in London. The success and the prosperity of the Plymouth settlement attracted more Europeans, began what became known as the great Puritan migration.

And they shared their bounty with the Indians. Actually, they sold some of it to 'em.

The true story of Thanksgiving is how socialism failed. With all the great expectations and high hopes, it failed.

And self-reliance, rugged individualism, free enterprise, whatever you call it, resulted in prosperity that they never dreamed of.

May God Bless you and yours.

As I give thanks for the blessings that I have received, I pray to give thanks to God for his blessings in the future as he watches over my family and yours. 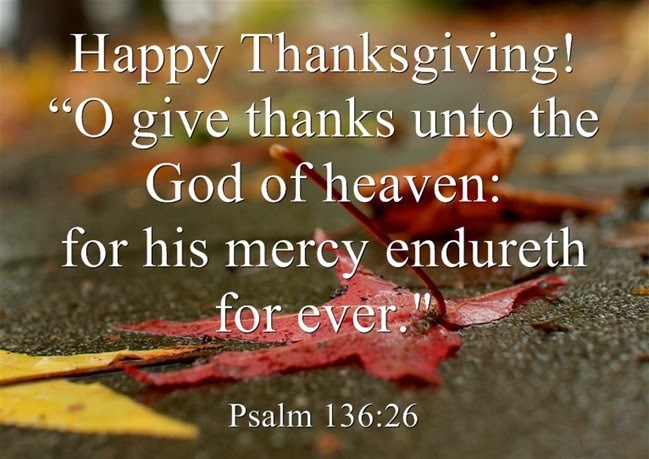