What Are PMU Horses? 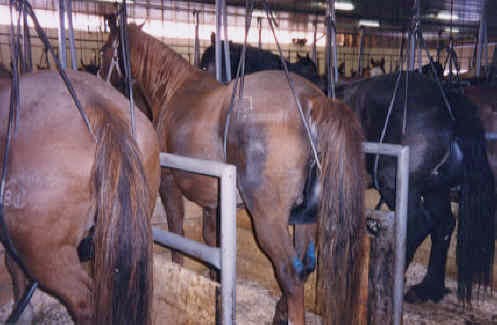 PMU stands for "Pregnant Mare Urine". PMU mares are kept in a constant state of pregnancy, forced to wear plastic UCD (urine collection devices), and tied up for six months of every pregnancy in the small stalls where the mares cannot even turn around.

Row after row of these pregnant horses are forced to stand the torture of narrow stalls with catheter tubes forced into their bodies for months on end. All to collect their urine. The urine is used in the manufacturing of Premarin which is a very common hormone replacement therapy medication. The brand name "Premarin" stands for PREgnant MARes' urINe. Premarin, including Prempro, Premphase, Prempac, and Premelle, is a drug made up of conjugated estrogens obtained from the urine of pregnant mares. The horses used to produce this drug are referred to as "PMU Horses".
To produce Premarin, PMU mares are impregnated, fitted with a UCD and normally kept throughout their last six months of pregnancy in stalls just 8 feet long, by 3 1/2 feet wide, by 5 feet high.

Just before foaling they are taken "off line" and allowed to foal in outside paddocks, 90% of the mares will carry a foal full term. After foaling, the mares are immediately impregnated again and the brutal cycle repeated.

A medicine to help women during the change, or just more problems?

Premarin is distributed in many forms, such as pills, creams, injections, patches, vaginal rings, and is used to reduce the symptoms of menopause in women or women who have had a hysterectomy. It is also prescribed to nearly eliminate the risk of osteoporosis, brittle bones, and reduce the chance of heart disease in women over 50.

One million women in the United States were still taking Prempro pills as of June 2003, down from the 3.4 million taking the drug before the negative Women's Health Initiative study results became known. As of November 2003, approximately nine million American women are still taking some form of Premarin.

About a third of the approximately fifty-five million post menopausal women in the United States are on estrogen replacement therapy, ERT, or hormone replacement therapy, HRT. Of them, about 49% currently use PMU based products (down from a high of 79% in 1999) -- while there are a number of estrogens excreted by the pregnant mare, estrone sulfate, equilin, and equilenin are the most significant.

How is Premarin produced?

Premarin is created by collecting the urine of pregnant mares. The mares are kept in small standing stalls in order to limit their movement, so not to displace the urinary bladder bags used to collect every drop of urine.


The mares are kept in this manner for a lengthy portion of their pregnancy, normally about six months. Once the mares are full term and ready to deliver, they are turned out to have their foals.

The mares are able to nurse their foals until weaning age, about 4 months, at which time they are separated and the mare is bred back to repeat the whole process again. This cycle of breeding has created an overabundance of unwanted foals, most of which are sold to the slaughter industry.

"PMU" farms exist all across the US and Canada. Conditions at "PMU" farms vary, and some farms work very diligently to place their unwanted foals.


How About The Foals?

Many "PMU" foals are well bred, and some are even registered purebreds. But frankly that doesn't matter. You see while horse rescue organizations try to save as many PMU Horses as possible, and "PMU" foals can be adopted online through rescue groups, most of the foals bred are sold directly to meat processing plants.

While they have better chances of being rescued in the United States, in Canada a "PMU" filly has a less than one in ten chance of escaping slaughter. As for a colt, a colt is almost certainly doomed with a less than one in fifty chance at life.

The mares suffer a much more grim outlook, as they are not sold until they are no longer able to become pregnant, and at that point many are too foul tempered to be desirable.

"PMU" foals can be very rewarding to work with, as they frequently have not been handled before rescue, and for all intents and purposes should be considered wild.

Reports show that most PMU foals, see as "by-products" of the endless horse pregnancies necessary to manufacture Premarin®, are typically sent to auction where they sell cheap to slaughterhouse buyers. The reports go on to say that some foals are actually shipped in live loads to foreign markets for slaughter.

So now, what happens to the PMU horses when they are done producing?

When the exhausted PMU mares finally wear out, they too often end up in the hands of the killers, the slaughterhouse buyers. It is believed that hundreds of thousands of PMU mares and foals have probably died in connection with the manufacture of the Premarin® family of drugs.

Taking into consideration the quantity of pregnant mare urine required to make Premarin® and its high volume of sales, that number is quite possibly as high as a million, probably even higher. These numbers, of course, will continue to climb as long as women continue to choose to take drugs manufactured from PMU horses, the pregnant mare urine, and of course there is a profit to be made.

Yes, contracts vary with each PMU producer, but generally the gross revenue from pregnant mare urine ranges from around $2,000 to $2,500 per mare per year. PMU farmers, the low-men on the economic totem-pole in this business, are paid up to $11.00 U.S. dollars per one gallon of PMU -- about $0.00275 per gram of estrogen collected.

This is a business that produced 43 million U.S. dollars off of urine sales in 2002, so it seems that the PMU producer is getting screwed while having to garner the brunt of the criticism from the horse industry.


So other than PMU producers finding it not economically feasible to put these horse through this torture, modern research finds Premarin not healthy for women to take. And because of that, the demand for it is going down. This is good news for two reasons. One, that means that less PMU foals will be born and thus less going to slaughter. And two, the good news is also that there are now many alternatives available for women faced with the issue of hormone replacement.

The suffering of the mares and foals who are victims of the PMU industry can be alleviated if more women facing menopause or hysterectomy choose plant-derived or synthetic estrogen products instead of Premarin and its off-shoots.

And yes, women can stop the abuse of the approximately 100,000 mares and foals who suffer in PMU collection barns and slaughterhouses every year by simply asking their doctor for a synthetic or plant-based alternative to PMU-based drugs.

I've known a few women who have actually pushed aside hormone replacement therapy, and its side-effects, to seek other options. They have lead great lives. No surprise really, after all it is possible to do so.