Republican Win Is About Governance Of The Nation 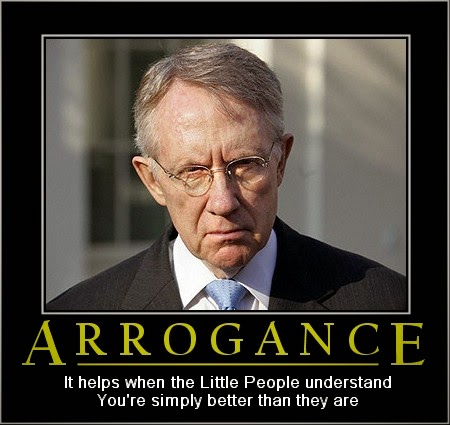 November 4th, 2014, the Republican Party has taken control of the Senate -- and the arrogance of Harry Reid will only last a few more months.

Democrat Senator Harry Reid will be out as the Senate Majority Leader come January 2015. That means that as of January, he will no longer be a roadblock to Bills submitted to the Senate from the Republican controlled House of Representative.

Harry Reid will go down in American Political History as the man who refused to compromise on anything and everything when it came to bills coming from Republicans in Washington D.C..

Harry Reid has been the number one reason, yes the primary reason, that the United States Congress has not gotten anything done to help lift the yoke of over-regulation off of Americans across the nation.

Harry Reid will not be missed other than by those who bought and paid for his stubbornness and uncompromising stance -- even after the people spoke in 2011 and fired Nancy Pelosi as Speaker of the House.

And as for Nancy Pelosi, the woman who is the lightning rod of the Democrat Party?

Yes,Nancy Pelosi may now join Harry Reid in being just another liberal in Washington -- because she may also be out of the Democrat Leadership come January.

Yes, to the cheers of many, Pelosi may lose her job as House Minority Leader because of her ineptness to stop a Democrat Party that is moving more and more to ultra-Liberalism while the rest of the nation moves further to Conservatism..

The to-do list that Democrats had in front of them was ignored and now American voters has said "Enough Is Enough!"

Now that same to-do list in in front of the Republicans to get to work on, and they better act and act swiftly to address the following:

1) Approving the Keystone Pipeline
2) Dismantling ObamaCare, and/or some of the key provisions of ObamaCare that the Republican Congress can change -- such as the employer mandates, the loss of personal doctors, cancellations of health insurance, stopping built-in penalties and fines, stopping the IRS from being in charge.
3) Securing the Border.
4) Putting a stop to government overreach and over regulations.
5) Promoting investment in American energy and depriving Muslim terrorists and their supporters funds from oil sales from of oil rich Muslim nations.

Obama promised an administration that would be "the most transparent ever" yet it has been the most divisive and the most secretive -- even more secretive than that of the Nixon White House.

Democrats supported Obama's agenda and never took him to task over his choices of advisers such as those who are affiliated with the Muslim Brotherhood.

Democrats pushed the lie "if you like your doctor, than you can keep your doctor" and now Republicans are going to have to fight Obama to make sure that we really can keep our doctor if we want to. And yes, Republicans will have to fight to change ObamaCare to actually help rates go back down instead of up.

Like it or not, Republicans are going to have to do what Harry Reid has fought against -- and that is hold hearings in the Senate?

Americans are tired of the stonewalling and need to find out where 2,200 assault weapons ended up in the Eric Holder run Operation Fast & Furious? Why Janet Napolitano refused to arm our border patrol agents with little more than bean bag rounds on the border? Her directives resulted in the death of agent Brian Terry who returned fire with non-lethal bean bag rounds while being shot at with real bullets.

Republicans should demand that the Justice Department explain why they classified the terrorist attack on Fort Hood as "workplace violence"?

Republicans should be asking why the ever growing budget for the Department of Defense is being spent on waste? And yes, they should also ask why expensive military hardware, such as armored vehicles, weapons, and other combat equipment, is all being "given" to civilian police and sheriff departments for free?

Republicans can now find out why America swapped 5 al Qaeda terrorist generals in Gitmo for one U.S. Army deserter, or why ISIS has been able to recruit Americans for their army which is taking over an entire region which was secured by U.S. troops not too long ago?

And yes, it is now up to Republicans to find out why Hillary Clinton and Barack Obama simply let four Americans die in Benghazi Libya when Marines were 2 hours away?

And yes, that means the EPA, the IRS, the DOJ, and any other Government Agency that has abused its authority needs to be investigated and stopped. And no, I don't care if the Republicans disband the EPA and the IRS and start all over again -- especially if that's what it takes to clean up the corruption and abuse of power coming from those agencies.

As for going to Washington with a mandate to make changes for the better instead of simply making changes without caring about their harmful results -- yes, Common Core and pitiful lunch programs for hungry school children should be examined and terminated.

We should return to real knowledge being taught. Real history and not biased attacks and brainwashing. And no, we should not allow a lunch based on the fears of a First Lady who is concerned about her weight.

Michelle Obama should not be able to project her fears of getting fatter on American children who need good lunches instead of diets close to bread and water.

And as with the Common Core program of Liberal Indoctrination, we should demand that the Department of Education explain why Muslim rituals and Islam are being allowed to be taught in our schools -- and yet Christianity is prohibited.

Of course, while the Republicans are reviewing programs -- I hope they cut waste such as the waste from the CDC which has spent $3.2 Million on research to find out "Why Lesbians Are Fat"?

And no, we should not be paying Millions of taxpayer dollars to NASA to make Muslims feel good about their contributions to America's space programs.

In a time when money is tight because of years of overspending on bullshit, someone needs to find out why the Veteran's Hospital in Sacramento California decided to spend hundred of taxpayer dollars a piece on door hinges for every door in a new VA building there?.


We need to find out why and how criminal waste happens -- and stop it. And yes, like it or not, we need to hold those in office accountable to us -- yes, to us -- because whether they like it or not, they have to learn that they work for us and not the other way around.

Americans are tired of Obama's policies of class warfare and race favoritism. Americans want to see things repaired, fixed, and not see just more politicians giving a lot of lip service to our problem.

Americans want a Republican House and Senate which will fight against Obama and his ideas of change for the worse.

Last night, Arkansas Republican Tom Cotton said that his defeat of incumbent Democrat Senator Mark Pryor was less about the candidates and more about "the governance of the nation."

I couldn't agree more. While speaking to his supporters in Little Rock on Tuesday night, Tom Cotton acknowledged that most people had expected him to win -- but he said, the win came bigger and earlier than he had expected.

While that was good, he noted that his victory was the result of "a choice to live as a free people and to govern ourselves freely under the greatest Constitution in history."
"We have again chosen constitutional self-government, which allows each of us to flourish according to his abilitites and industry . . . and to control our government rather than be controlled by it.
We reject pessimism and defeatism inherent in the other way of governing, the centralizing and bureaucratic rule of presumed elites."

Democrat Pryor was tied to Barack Obama, but even more so when he invoked Obama's primary victory speech from 2008 when Obama said the moment would be remembered as the time the planet began to heal.

"I won't promise to heal the planet or repair every broken institution, but I will promise to act with integrity and principle and to use politics as an instrument to unite us, not a weapon to divide us," Tom Cotton said.

While I believe that the Republican win means that they better deliver on resisting President Obama's Socialist policies, like Tom Cotton, I believe that this win was about Americans who saw what was at stake -- the governance of the nation where we are free to pursue our own dreams according to our own abilities, all while we control government so that the government does not control us.

Yes, that's just the way I see it.