Obama Proves Himself To Be A Very Small Man 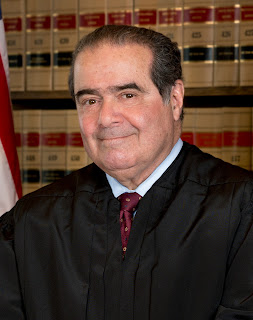 Antonin Scalia was born on March 11th, 1936, and died in his sleep from natural causes on the night of February 12th or the morning of February 13th, 2016, following an afternoon of quail hunting and dining at the Cibolo Creek Ranch in Shafter, Texas.

Antonin Scalia was an Associate Justice of the Supreme Court of the United States. He was appointed to the Supreme Court by President Ronald Reagan in 1986, and served until his death a few days ago. Yes, Justice Scalia served on the Court for nearly 30 years.

So yes, for the last 30 years he was the intellectual anchor for the originalist and textualist position in the Court's Conservative wing.

What does that mean? That means he was a strict Constitutionalist who believed that the Constitution of the United States is a legal document and should be taken as such. It is a contract between the government and Americans citizens. It directs what the government can and cannot do in extremely plain language. It is what it is and shouldn't be twisted or spun to mean something that it does not say.

Yesterday, Americans paid their final respects to Supreme Court Justice Antonin Scalia, in a Catholic Mass funeral in Washington D.C. that celebrated the Conservative Justice's devotion to his faith and family.

Justice Scalia's flag-draped casket was brought to the church Saturday morning, in a short trip from the Supreme Court building on Capitol Hill where it had been laying in repose. In fact, his casket in repose rested on a funeral bier that first held President Abraham Lincoln's casket after his assassination.

His sons and his sons-in-law served as pallbearers carried the casket into and out of the basilica which is our nation's largest Roman Catholic church. In additon to his wife of 55 years and their nine children and dozens of grandchildren, other dignitaries at the service included Vice President Joe Biden, former Vice President Dick Cheney, Attorney General Loretta Lynch, former House Speaker Newt Gingrich, 95-year-old retired Justice John Paul Stevens, the remaining eight Supreme Court Justices, members of Congress, several federal judges. and thousands of others.

One of Justice Scalia's sons, the Rev. Paul Scalia, a Catholic priest serving the diocese of Arlington, Virginia, led the service at the Basilica of the National Shrine of the Immaculate Conception in Washington. Never before had a funeral for a Supreme Court Justice been held at the Basilica.

Justice Clarence Thomas read from the New Testament. And no, there was no eulogy in a service which was free of partisan politics. Although, his son,

Though President Obama and his wife Michelle were among the more than 6,000 people who paid their respects to Justice Scalia at the Supreme Court building on Friday, President Obama did not attend his funeral. Yes, to me, that was a classless act.

White House spokesman Josh Earnest tried to excuse Obama's classless act to purposely not go to the Conservative Supreme Court Justice's funeral, saying that it was a "respectful arrangement" that took into account Obama's large security detail. Of course, he did not address how George W. Bush could attend a funeral with his security detail when he was president but Barack Hussein Obama couldn't?

And yes, that leads us to other things that really don't make much senses. For example, this week Hookers in Nevada came out to say they support Hillary Clinton. Someone on the radio asked if it was a matter of Professional Courtesy? I believe they have so much in common. After all, the only question is price.

Bernie Sanders being  a Socialist is not news. But frankly, what should be news is Sanders' being exposed as full blown Communist with actual ties to Communist organization sworn to work toward the overthrow of the United States,  Of course, it might matter, if only his supporters really understood what that really means? Which they don't!

Democrat Senator Chuck Schumer of New York came out saying that Obama should nominate a replacement for Justice Scalia even if Obama only has 10 months left in office. This is a 180 degree turn around from what Schumer said in 2007 when he demanded that George W. Bush be banned from nominating a replacement Justice when he had a year and a half left in office.

Hillary and Schumer and Obama are all on video opposing Justice Alito's nomination. Obama having the distinction of being the only president to oppose a Justice nominee and have to nominate a Justice later -- then ask that his nominee not be opposed.

Yes, Hillary and Schumer and Obama, all attempted a filibuster against Justice nominee Samuel Alito. Yes, back in 2006, then-Senator Obama said that he "disagreed with the premise that a president’s nomination to the Supreme Court (or any federal court) should be confirmed just because he won an election."

Now, ten years later, Obama is singing a different tune. He now says that blocking judicial nominations isn’t how our system of government is supposed to work. As if Obama knows how our system works? This from a man who has circumvented our legislative process and instead has tried to "rule" as some sort of Dictator or King with edicts in the form of executive orders.

Obama said that he would not make a recess appointment, but he would nominate somebody who would be "indisputably" qualified and whom "any fair-minded person -- even somebody who disagreed with my politics -- would say would serve with honor and integrity on the court."

This comes from a man who sees political gain where he can get it. This coming from a man who found time to meet and celebrate the "work" of a Hate Group known as Black Lives Matters. Yes, a Hate Group which advocates the killing of Cops and White Americans.

Frankly, Obama has no knowledge of what honor and integrity means. Obama doesn't have the class to put politics aside and attend a Supreme Court Justice's funeral. He is pathetic!

And frankly, it is a shame that Obama didn't have enough class to put aside politics and morn a great American who gave nearly 30 years of service to America. With this last classless act, the act of showing that 30 years of service as one of nine Supreme Court Justices means nothing just because Justice Scalia was a Conservative, Obama has proven himself to be such a very small man. Yes, Obama is a very very small man.

Obama has shown himself to be just like the Black Lives Matters hate group's lowlifes which he whole heartily supports. He is just full of hate and bigotry. He is just a pathetic Democrat politician who has proven to America once and for all that he is indeed just a very small man.

After posting this late last night, I have been bombarded by hate mail from Liberals who love Obama and praise what he has done while in office. I have been called all sorts of names including of course a racist.

One Obama supporter wrote to tell me that the world is full of many types of people, and that they don't always act as I would like them to act. And yes, she said that I should be more understanding about the ways of others.

Allow me to make something very clear. While the world is indeed full of many types of people, Obama and any sitting President is EXPECTED to act in certain ways. Just as they need to be honest and be truthful, have honor and integrity, they also need to be bigger than what Obama has shown to be!

If you have to ask why? Frankly, if that's the case and you who support Obama truly do not understand why any sitting President need to be bigger than petty politics -- then there is no way to explain to you why.

But understand this, they need to be honest and truthful, have honor and integrity, and be bigger than what Obama has shown to be -- if for any other reason, to help set the right direction for our nation's moral compass.

Like it or not, as a nation, we must demand that the President, whether it be a man or woman from either political party, should have enough class to put aside political differences and show up at the funeral of a Supreme Court Justice. We should not give Obama a pass because he's Black or a Democrat, but then demand that a Republican or a White man or woman must act in a different way.

The president owns his policies and actions. He or she can act wise or dumb, naive or worldly, for American interest or not, all they want. But, like it or not, there are things We The People have to demand in the ways our presidents act. We must demand that he properly salutes those in uniform, that he works in the interest of our nation, that he preforms his duties according to the Constitution with decorum in a dignified manner.

In this case, Obama has should his true colors, he has again acted in an undignified manner while presenting to our nation his hate, his bigotry, his disrespect for others not Black or Democrat.


And yes, that's just the way I see it.
Tom Correa