Theodore Roosevelt's "The Man In The Arena" 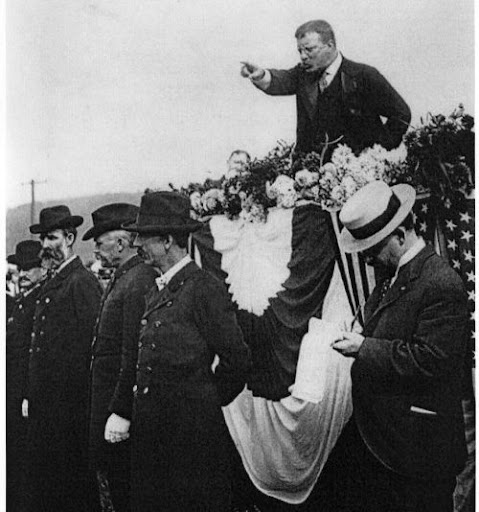 About 40 years ago, I was in a job that was becoming more and more demotivating everyday. To add to this, I was feeling more and more aggravated by the overwhelming feeling that all of my long hours was all simply going toward a lost cause.

A friend who saw my frustration, and was feeling the same way, gave me a copy of "The Man In The Arena." I read it and then pinned it to the wall of my office. It has been a big part of my belief system ever since.

Anyone who knows me, knows that I'm a very big fan of people who have struggled and prevailed. I admire "stick-to-it-ive-ness". I admire people who get rained on and smile, bloodied and push forward, beaten down and get back up. Just as days gone by, I still admire bull dog tenacity.

Yes, I admire tenacious, pertinacious, persistent, stubborn, obstinate people who refuse to settle when making things right -- especially when they have a working moral compass steering them in the right direction.

I praise those who wanted liberty and took on England and won. I honor those who made the long forced journey during the Trail of Tears. I respect the commitment of Southerns in their fight against the North. Like it or not, they saw it as a war of aggression by states different from them as night is from day.

Yes, I revere those American Pioneers who crossed the Great Desert now known as the Great Plains to forge a life for themselves -- one where they did not have to work for others and can be masters of their own destiny. An ethos that has become the American spirit.

And please don't think I take sides in history, I truly admire those Native American tribes like the Nez Pierce who left their home and sought freedom while being doggedly warred upon for no sane reason. Their gallant fight was not all for naught.

I absolutely tear up when I think how my own great-great-grandparents where hauled to Hawaii as Contract Labor, Indentured Servants, and had to work their way out of that form of bondage. And yes, I admire that they did not settle for a life of nothing and instead worked in all sorts of forms of labor to get ahead.

I admire America's First Slaves, those from Ireland, because they were determined to rise up above that state in life or died trying. And I absolutely admire the immigrant who comes to America to leave their old Nationality behind and become Americans.

Those people, Europeans at first, faced more racism and hardship than any other race coming to America. But frankly, they made it. And yes, the coal mines and gold mines and mills and plants would not have been if it weren't for them.

I truly admire the Cowboy and the Farmer, they are the only two occupations that are America's real stewards of the land. Without them and their care for the land, people do not eat. And yet, they are put upon more and more by government rules and regulations that are engineered to impede them feeding the world. How they feed the world and still take a beating from government is beyond me. But yes, they persevere.

I have nothing by admiration for my grandparents and parents who lived through the Great Depression and never whined a day about what they didn't have. And yes, I feel that same way about anyone who grows up struggling and understands what hard work is worth.

I admire those men and women who are no afraid to stand up to tyrants and guns when seeing them violate our Constitution. I admire Christians who will not give up on God and our faith even though the government attacks are relentless. And yes, I really admire those who see the threat of Socialism, of Islam, of Political Correctness, and fight all to preserve our freedoms and liberties today. These people are my heroes.

One such hero of mine is Theodore Roosevelt. For me, he lived through hard times, both physically and emotionally, knew what it was to experience loss at a fairly young age, and through this he kept his composure, his honor, his integrity. All kept him afloat through storms, and gave balance and meaning to his life.

His belief in hard work and his desire to do the right thing serves as an example to all. He proved that positive actions, coupled with shear tenacity, can get you far in life.

As for "The Man In The Arena", it is considered Theodore Roosevelt's most memorable section of a speech entitled "Citizenship in a Republic" given by the former President of the United States at the Sorbonne in Paris, France on April 23, 1910

That notable passage on page seven of the 35-page speech is referred to as "The Man in the Arena." And yes, in those few words, Theodore Roosevelt captured his life's philosophy. A philosophy to be emulated.

In just a few sentences, "The Man In The Arena" tells us that the man we should praise is the man who is out there fighting the good fight, big battles and small. And even if those battles end in defeat, he did not sacrifice his honor, his integrity, or his very soul.

In today's world, a world snide comments, cynicism, and a lack of commitment are looked at as being in fashion, Theodore Roosevelt's life philosophy reminds us that there is goodness to be had and honor retained for those "who spend themselves in a worthy cause."

It is said that someone who is heavily involved in a situation that requires courage, skill, and tenacity is sometimes referred to as someone "in the arena." That person is the doer. That person refuses to sit on the sidelines and watch. That person rolls up their sleeves and joins in. That is the American spirit.

"The Man In The Arena"

"It is not the critic who counts; not the man who points out how the strong man stumbles, or where the doer of deeds could have done them better. The credit belongs to the man who is actually in the arena, whose face is marred by dust and sweat and blood; who strives valiantly; who errs, who comes short again and again, because there is no effort without error and shortcoming; but who does actually strive to do the deeds; who knows great enthusiasms, the great devotions; who spends himself in a worthy cause; who at the best knows in the end the triumph of high achievement, and who at the worst, if he fails, at least fails while daring greatly, so that his place shall never be with those cold and timid souls who neither know victory nor defeat." 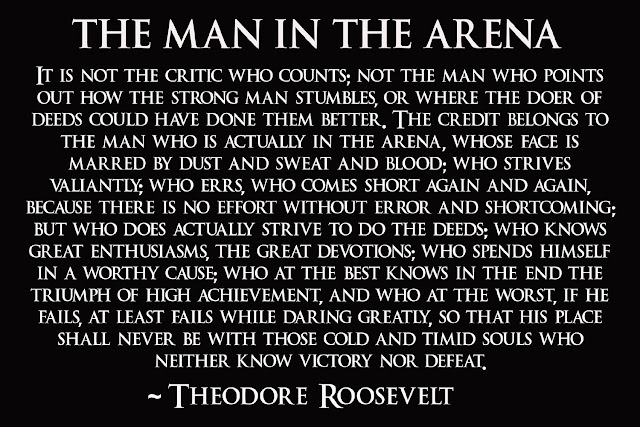 And yes, that's just the way I see it.
Tom Correa
Posted by Tom Correa at 8:25 PM