The Vigilantes Of California, Part One 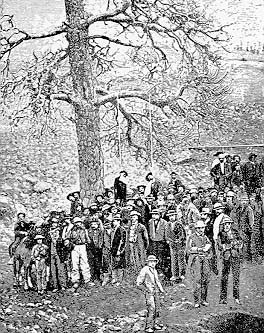 Right now, there are Vigilante groups forming throughout the European Union in response to the failure of governments in Europe to provide security for the people there. Since we Americans are now being forced to accept refugees who many worry are a security risk, we may be forced into a similar position whether we like it or not.

Because of this, I feel compelled to talk about the history of Vigilante groups in the Old West.

So with that, for the next week, I will put other interest aside so that I may focus on the history of a few of the larger Vigilante groups that were present in the American West.

I'll be using as many sources as I can, including such sources as Emerson Hough who was a writer and American Historian during the late 1800s and early 1900s.

I hope you see a correlation between the threats felt by the people in the Old West to what people are feeling today in both Europe and here.

I feel that by examining the history of some of these groups, we can better understand why people resorted to forming "Citizen Committees". Many may see one reoccurring theme in that when a government fails to provide security for their people -- citizens will pickup that touch for themselves.

The Vigilantes Of California, Part One
by Emerson Hough
1905

The world will never see another California. Great gold stampedes there may be, but under conditions far different from those of 1849. Transportation has been so developed; travel has become so swift and easy, that no section can now long remain segregated from the rest of the world.

There is no corner of the earth which may not now be reached with a swiftness impossible in the days of the great rush to the Pacific Coast.

The whole structure of civilization, itself based upon transportation, goes swiftly forward with that transportation, and the tent of the miner or adventurer finds immediately erected by its side the temple of the law.

It was not thus in those early days of our Western history. The law was left far behind by geography and wilderness travel. Thousands of honest men pressed on across the plains and mountains inflamed, it is true, by the madness of the lust for gold, but carrying at the outset no wish to escape from the watchfulness of the law.

With them, went equal numbers of those eager to escape all restraints of society and law, men intending never to aid in the uprearing of the social system in new wild lands.

Both these elements, the law-loving and the law-hating, as they advanced farther and farther from the staid world which they had known, noticed the development of a strange phenomenon: that law, which they had left behind them, waned in importance with each passing day. The standards of the old home changed, even as customs changed.

A week's journey from the settlements showed the Argonaut a new world. A month hedged it about to itself, alone, apart, with ideas and values of its own and independent of all others. A year sufficed to leave that world as distinct as though it occupied a planet all its own. For that world the divine fire of the law must be re-discovered, evolved, nay, evoked fresh from chaos even as the savage calls forth fire from the dry and sapless twigs of the wilderness.

In the gold country all ideas and principles were based upon new conditions. Precedents did not exist. Man had gone savage again, and it was the beginning. Yet this savage, willing to live as a savage in a land which was one vast encampment, was the Anglo-Saxon savage, and therefore carried with him that chief trait of the American character, the principle that what a man earns -- not what he steals, but what he earns -- is his and his alone.

This principle sowed in ground forbidding and unpromising was the seed of the law out of which has sprung the growth of a mighty civilization fit to be called an empire of its own. The growth and development of law under such conditions offered phenomena not recorded in the history of any other land or time.

In the first place, and even while in transit, men organized for the purpose of self-protection, and in this necessary act, law-abiding and criminal elements united. After arriving at the scenes of the gold fields, such organization was forgotten; even the parties that had banded together in the Eastern states as partners rarely kept together for a month after reaching the region where luck, hazard and opportunity, inextricably blended, appealed to each man to act for himself and with small reference to others.

The first organizations of the mining camps were those of the criminal element. They were presently met by the organization of the law and order men.

Hard upon the miners' law came the regularly organized legal machinery of the older states, modified by local conditions, and irretrievably blended with a politics more corrupt than any known before or since. Men were busy in picking up raw gold from the earth, and they paid small attention to courts and government.

The law became an unbridled instrument of evil. Judges of the courts openly confiscated the property of their enemies, or sentenced them with no reference to the principles of justice, with as great disregard for life and liberty as was ever known in the Revolutionary days of France.

Against this manner of government presently arose the organizations of the law-abiding, the justice-loving, and these took the law into their own stern hands. The executive officers of the law, the sheriffs and constables, were in league to kill and confiscate; and against these the new agency of the actual law made war, constituting themselves into an arm of essential government, and openly called themselves Vigilantes.

In turn, criminals used the cloak of the Vigilantes to cover their own deeds of lawlessness and violence. The Vigilantes purged themselves of the false members, and carried their own title of shameful conduct, the "stranglers," with unconcern or pride.

They grew in numbers, the love of justice their lodestone, until at one time they numbered more than five thousand in the city of San Francisco alone, and held that community in a grip of lawlessness, or law, as you shall choose to term it. They set at defiance the chief executive of the state, erected an armed castle of their own, seized upon the arms of the militia, defied the government of the United States and even the United States Army. They were, as you shall choose to call them, criminals, or great and noble men.

Seek as you may today, you will never know the full roster of their names, although they made no concealment of their identity; and no one, to this day, has ever been able to determine who took the first step in their organization.

They began their labors in California at a time when there had been more than two thousand murders-- five hundred in one year -- and not five legal executions. Their task included the erection of a fit structure of the law, and, incidentally, the destruction of a corrupt and unworthy structure claiming the title of the law.

In this strange, swift panorama there is all the story of the social system, all the picture of the building of that temple of the law which, as Americans, we now revere, or, at times, still despise and desecrate.

At first, the average gold seeker concerned himself little with law, because he intended to make his fortune quickly and then hasten back East to his former home; yet, as early as the winter of 1849, there was elected a legislature which met at San Jose, a Senate of sixteen members and an Assembly of thirty-six. In this election the new American vote was in evidence.

The miners had already tired of the semi-military phase of their government, and had met and adopted a state constitution. The legislature enacted 140 new laws in two months, and abolished all former laws; and then, satisfied with its labors, it left the enforcement of the laws, in the good old American fashion, to whomsoever might take an interest in the matter. This is our custom even today.

Our great cities of the East are practically all governed, so far as they are governed at all, by civic leagues, civic federations, citizens' leagues, business men's associations -- all protests at non-enforcement of the law. This protest in '49 and on the Pacific Coast took a sterner form.

At one time the city of San Francisco had three separate and distinct city councils, each claiming to be the only legal one. In spite of the new state organization, the law was much a matter of go as you please. Under such conditions it was no wonder that outlawry began to show its head in bold and well-organized forms.

A party of ruffians, who called themselves the "Hounds," banded together to run all foreigners out of the rich camps, and to take their diggings over for themselves. A number of Chileans were beaten or shot, and their property was confiscated or destroyed. This was not in accordance with the saving grace of American justice, which devoted to a man that which he had earned.

A counter organization was promptly formed, and the "Hounds" found themselves confronted with two hundred "special constables," each with a good rifle. A mass meeting sat as a court, and twenty of the "Hounds" were tried, ten of them receiving sentences that never were enforced, but which had the desired effect.

So now, while far to the east, Congress was hotly arguing the question of the admission of California as a state, she was beginning to show an interest in law and justice when aroused thereto.

-- end of Part One, The Vigilantes Of California

The Vigilantes Of California, Part Two

Emerson Hough was born in 1857 and passed away in 1923. He was an American author, Western Historian, best known for writing western stories and historical novels.

One such novel is titled The Story of the Outlaw which was first published by the Curtis Publishing Co. in 1905 and then published again by the Outing Publishing Company, New York, in 1907.

As with all of his books, from outlaws to border wars, from vigilantes to lawmen, The Story of the Outlaw includes historical narratives of the American West. The Vigilantes Of California is a chapter in that novel. Because of my Blog's limited space, I'm posting this chapter in four parts.

Since Emerson Hough is known to have written factual accounts, I hope you enjoy the historical accuracy of what took place in the American West.

Tom Correa
Editor
The American Cowboy Chronicles
Posted by Tom Correa at 1:35 AM