The Vigilantes Of California, Part Three

The Vigilante Committee now arrested two more men, not for a capital crime, but for one which lay back of a long series of capital crimes -- the stuffing of ballot-boxes and other election frauds.

These men were Billy Mulligan and the prize-fighter known as Yankee Sullivan. Although advised that he would have a fair trial and that the death penalty would not be passed upon him, Yankee Sullivan committed suicide in his cell.


The entire party of lawyers and judges were arrayed against the Committee, naturally enough. Judge Terry, of the Supreme Court, issued a writ of habeas corpus for Mulligan. The Committee ignored the sheriff who was sent to serve the writ.

They cleared the streets in front of headquarters, established six cannon in front of their rooms, put loaded swivels on top of the roof and mounted a guard of a hundred riflemen. They brought bedding and provisions to their quarters, mounted a huge triangle on the roof for a signal to their men all over the city, arranged the interior of their rooms in the form of a court and, in short, set themselves up as the law, openly defying their own Supreme Court of the state.

So far from being afraid of the vengeance of the law, they arrested two more men for election frauds, Chas. P. Duane and "Woolly" Kearney. All their prisoners were guarded in cells within the headquarters building.

The opposition to the Committee now organized in turn under the name of the "Law and Order Men," and held a public meeting.

This was numerously attended by members of the Vigilante Committee, whose books were now open for enrollment. Not even the criticism of their own friends stayed these men in their resolution.

They went even further. Governor Johnson issued a proclamation to them to disband and disperse. They paid no more attention to this than they had to Judge Terry's writ of habeas corpus. The governor threatened them with the militia, but it was not enough to frighten them. General Sherman resigned his command in the state militia, and counseled moderation at so dangerous a time.

Many of the militia turned in their rifles to the Committee, which got other arms from vessels in the harbor, and from carelessly guarded armories. Halting at no responsibility, a band of the Committee even boarded a schooner which was carrying down a cargo of rifles from the governor to General Howard at San Francisco, and seized the entire lot.

Shortly after this they confiscated a second shipment which the governor was sending down from Sacramento in the same way; thus seizing property of the federal government. If there was such a crime as high treason, they committed it, and did so openly and without hesitation.

Governor Johnson contented himself with drawing up a statement of the situation, which was sent down to President Pierce at Washington, with the request that he instruct naval officers on the Pacific station to supply arms to the State of California, which had been despoiled by certain of its citizens.

President Pierce turned over the matter to his attorney-general, Caleb Gushing, who rendered an opinion saying that Governor Johnson had not yet exhausted the state remedies, and that the United States government could not interfere.

Little remained for the Committee to do to show its resolution to act as the State pro tern pore. That little it now proceeded to do by practically suspending the Supreme Court of California. In making an arrest of a witness wanted by the Committee, Sterling A. Hopkins, one of the policemen retained for work by the Committee, was stabbed in the throat by Judge Terry, of the Supreme Bench, who was very bitter against all members of the Committee.

It was supposed that the wound would prove fatal, and at once the Committee sounded the call for general assembly. The city went into two hostile camps, Terry and his friend, Dr. Ashe, taking refuge in the armory where the "Law and Order" faction kept their arms.

The members of the Vigilante Committee besieged this place, and presently took charge of Terry and Ashe, as prisoners. Then the scouts of the Committee went out after the arms of all the armories belonging to the governor and the "Law and Order" men who supported him, the lawyers and politicians who felt that their functions were being usurped.

Two thousand rifles were taken, and the opposing party was left without arms. The entire state, so to speak, was now in the hands of the "Committee of Vigilance," a body of men, quiet, law loving, law-enforcing, but of course technically traitors and criminals. The parallel of this situation has never existed elsewhere in American history.

Had Hopkins died the probability is that Judge Terry would have been hanged by the Committee, but fortunately he did not die. Terry lay a prisoner in the cell assigned him at the Committee's rooms for seven weeks, by which time Hopkins had recovered from the wound given him by Terry.

The case became one of national interest, and tirades against "the Stranglers" were not lacking; but the Committee went on enrolling men. And it did not open its doors for its prisoners, although appeal was made to Congress in Terry's behalf -- an appeal which was referred to the Committee on Judiciary, and so buried.

Terry was finally released, much to the regret of many of the Committee, who thought he should have been punished. The executive committee called together the board of delegates, and issued a statement showing that death and banishment were the only penalties optional with them.

Death they could not inflict, because Hopkins had recovered; and banishment they thought impractical at that time, as it might prolong discussion indefinitely, and enforce a longer term in service than the Committee cared for. It was the earnest wish of all to disband at the first moment that they considered their state and city fit to take care of themselves, and the sacredness of the ballot box again insured. To assure this latter fact, they had arrayed themselves against the federal government, as certainly they had against the state government.

The Committee now hanged two more murderers -- Hetherington and Brace -- the former a gambler from St. Louis, the latter a youth of New York parentage, twenty-one years of age, but hardened enough to curse volubly upon the scaffold.

By the middle of August, 1856, they had no more prisoners in charge, and were ready to turn the city over to its own system of government. Their report, published in the following fall, showed they had hanged four men and banished many others, besides frightening out of the country a large criminal population that did not tarry for arrest and trial.

-- end of Part Three, The Vigilantes Of California

The Vigilantes Of California, Part Four 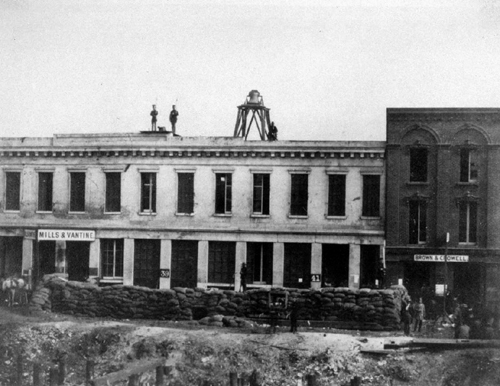