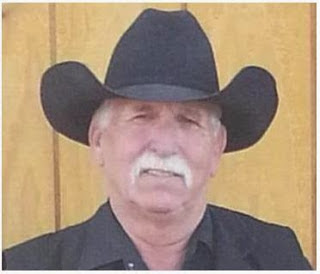 Several years ago in the mid 90s a good friend of mine by the name of Jeff took over managing a ranch called the Cobra, near Klondike Arizona.

This ranch was literally about sixty miles of dirt road North West of Wilcox near the entrance of the Araviapa Canyon wilderness, and the headwaters of the Araviapa creek began there.

The ranch was first settled sometime around 1867 and we were told by the owner that at one time Tom Horn had either been working the ranch or had another one near by for a short period of time. I never knew which for sure although it is on record that Tom Horn did have a ranch in that area.

Jeff asked me if I could come out and help him with the place, so being my good friend I took the job. At that time the place had been let go for the most part for about five or six years other than a caretaker who watched over the place, and had about thirty head of longhorns who hung around not far from the ranch house because he would feed hay from the back of his pickup.

When I got there the place was a mess, the working pens were shabby, fences were down, and we had no idea how many cows were on the place. By the owners estimate, he thought maybe 150 head or so. He was about to loose his leases so we had to get that place straightened out.

The first several days was just figuring out the lay of the land from topographic maps. With the deeded property, state leases, and federal forest leases, Best I recollect, it covered about 53 thousand acres with all combined. Now understand, this was not flat land. There were some flat areas but just a few, the majority of this place was mountainous.

The place was also over run with critters such as rattlesnakes, Javelinas, coatimundis, mountain lions, and even a few black bears. Now those critters were natural to the area but they were around the houses and working pens so we had to thin them out.

Most people think that a javelina is from the pig family but in reality they are a peccary, basically they are from the rat family not pig. The coatimundis (pronounced coot-a-mundis), is kind of a strange looking creature. It's from the raccoon family with a long ringed tail, small ears, and a nose which comes to a point so to speak. They get into everything, and with very sharp claws they can kill your dogs.

Then of course, the rattlesnakes, which could vary from a few feet as youngsters up to approximately seven feet long. I don't remember how many of these critters we had to kill but it was many, we had no choice, I never believed in killing just to kill, but it had to be done.

Now that we were ready to start gathering cattle we found that with fences down, the neighboring ranches cattle were grazing on the outfit. We spent two or three days pushing them back onto their own property. When we met up with some of the other ranchers at the Klondike store we told them they needed to get their cattle off of the place.

A few days went by and they didn't do it, so we met them again and told them that if they didn't get them off we would start branding them ourselves. Jeff told them we would brand anything and everything on the place, even the javelinas. Needless to say, they came and got their cattle.

Once the fences were fixed it was time to start gathering cattle. We started up high on the forest leases pushing everything down to the lower pastures as we descended. We were gathering longhorns in some cases that had never been around people.

These things were wild, so you had to stay off of them similar to moving bison, and just push them in the direction you wanted them to go. These longhorns, some with double twist horns, would gut your horse and then gut you should they have the chance, they were truly wild, just like the days of the old cattle drives back in the 1800s when the cowboys had to dig them out of the brush, same thing.

Several of these unruly savages, some weighing in at 1600 pounds or more, would turn back on you and head right back up high, so we let them go and just kept moving what we could until we pushed them on down to the area of the pens, then start all over again doing the same thing the next day, sometimes wearing out two horses a day, they were like chasing deer. when you would come up to a wall of heavy brush and mesquite trees those cows would go down on their front knees and go right under all the trees and brush and they were gone.

After days like that we looked like someone had beat us with switches riding through a lot of the brush and trees where we could.

Once we had everything gathered after several weeks, the owners estimate of 150 or so had turned into almost 400 head. Next came several days of riding around and through these longhorns getting them use to us and the horses as to get them to calm down some.

Once that was done it was time to go to work. There were no squeeze chutes or calf tables on this outfit so we had to do it the old fashioned way, rope them by head and heal and stretch them out to brand, vaccinate, and then castrate the young bull calves.

For most of you who wouldn't know, back in the early days longhorns were considered game animals, even Teddy Roosevelt went on longhorn hunts. Longhorns were introduced to this country in the 1400s by the Spanish explorers, until that time cattle were not indigenous to North America.

Left behind, they turned wild and thrived with a nasty temper and a great cleverness which domesticated cattle cannot match. Even the Native American Indians found it easier to kill bison than wild longhorn cattle.

On the Cobra Ranch, the average cow ran anywhere between 1200 to 1400 pounds, the steers weighed about 1500 to 1600, and the bulls around 2000 pounds. There was one bull called King Cobra which was bred between a longhorn on the King Ranch in Texas and one from the Cobra Ranch. This bull weighed in at almost 2,400 pounds. He was a big boy and his temper could be just as big as he was.

The old steers we had gathered would lead everything else away from us making gathering a big chore. They would lead the cows to a fence that ran along side of the road then jump it with the cows following. Then we would have to ride down to the gate and push them back again.

That fence wasn't really needed because it was on the ranch property and down the road a bit was the cattle guard, so we decided to tear out that section. Funny, the next time they tried it, when they reached the point where the fence use to be, they were still jumping just like the fence was still there.

They were literally surprised when we rode up and turned them back. Once we were finally able to get rid of those steers at the sale barn in Wilcox, the cows settled down and worked much easier just like any other cow.

For some time by now, I had moved our travel trailer onto the ranch and my wife was with me. One day I spotted several buzzards flying in a circle so I told the wife that I would be back in a little while.

The other boys was in Safford getting supplies. I saddled up and rode to the spot and found one of the neighbors black face baldies dead, she was killed by a mountain lion. After I pulled out the ear tag so I could call the owner to give him the number I heard a noise in the tall brush.

Don't know how but the lion had missed the baby bull calf so I threw him up over the front of my saddle and took him back to the house, called the neighbor and he said, keep the calf.

By now my wife was tired of being out so far away from town, so I showed her how to mix up the calf manna and feed the calf from a bottle. That did make things better for her for a while, that calf became her baby. He followed her wherever she would go and even into the ranch house if she wasn't careful.

That helped her to last it out a little longer, but about a month after that she was ready to leave and I didn't blame her. I have worked several ranches in my life, but working the Cobra was an experience like none other.

It was just like stepping back one hundred years ago in many ways. Believe it or not, it was a great life.