The Vigilantes Of California, Part Two 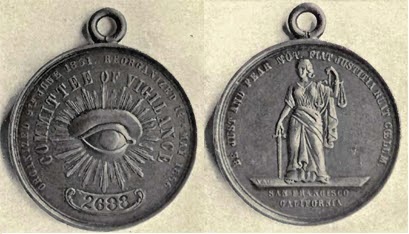 It was difficult material out of which to build a civilized community. The hardest population of the entire world was there; men savage or civilized by tradition, heathen or Christian once at least, but now all Californian.

Wealth was the one common thing. The average daily return in the work of mining ranged from twenty to thirty dollars, and no man might tell when his fortune might be made by a blow of a pick.

Some nuggets of gold weighing 25 pounds were discovered. In certain diggings men picked pure gold from the rock crevices with a spoon or a knife point. As to values, they were guessed at, the only currency being gold dust or nuggets.

Prodigality was universal. All the gamblers of the world met in vulture concourse. There was little in the way of home; of women almost none. Life was as cheap as gold dust. Let those who liked bother about statehood and government and politics; the average man was too busy digging and spending gold to trouble over such matters. The most shameless men were those found in public office.

Wealth and commerce waxed great, but law and civilization languished. The times were ripening for the growth of some system of law which would offer proper protection to life and property. The measure of this need may be seen from the figures of the production of gold. From 1848 to 1856 California produced between 500-600 million dollars in virgin gold. What wonder the courts were weak; and what wonder the Vigilantes became strong!

In 1851, seeing that the courts made no attempt to punish criminals, a committee was formed which did much toward enforcing respect for the principles of justice, if not of law. On June 11th, they hanged John Jenkins for robbing a store. A month later they hanged James Stuart for murdering a sheriff.

In August of the same summer they took out of jail and hanged Whittaker and McKenzie, Australian ex-convicts, whom they had tried and sentenced, but who had been rescued by the officers of the law.
Two weeks later this committee disbanded. They paid no attention to the many killings that were going on over land titles and the like, but confined themselves to punishing men who had committed intolerable crimes.

Theft was as serious as murder, perhaps more so, in the creed of the time and place. The list of murders reached appalling dimensions. The times were sadly out of joint. The legislature was corrupt, graft was rampant -- though then unknown by that name -- and the entire social body was restless, discontented, and uneasy.

Politics had become a fine art. The judiciary, lazy and corrupt, was held in contempt. The dockets of the courts were full, and little was done to clear them effectively. Criminals did as they liked and went un-whipped of justice. It was truly a day of violence and license.

Once more the sober and law-loving men of California sent abroad word, and again the Vigilantes assembled.

In 1853 they hanged two Mexicans for horse stealing, and also a bartender who had shot a citizen near Shasta.

At Jackson, they hanged another Mexican for horse stealing, and at Volcano, in 1854, they hanged a man named Macy for stabbing an old and helpless man. In this instance vengeance was very swift, for the murderer was executed within half an hour after his deed.  The haste caused certain criticism when, in the same month one Johnson was hanged for stabbing a man named Montgomery, at Iowa Hill, who later recovered.

At Los Angeles three men were sentenced to death by the local court, but the Supreme Court issued a stay for two of them, Brown and Lee. The people asserted that all must die together, and the mayor of the city was of the same mind. The third man, Alvitre, was hanged legally on January 12, 1855.

On that day the mayor resigned his office to join the Vigilantes. Brown was taken out of jail and hanged in spite of the decision of the Supreme Court. The people were out-running the law. That same month they hanged another murderer for killing the treasurer of Tuolumne County.

In the following month they hanged three more cattle thieves in Contra Costa County, and followed this by hanging a horse thief in Oakland. A larger affair threatened in the following summer, when thirty-six Mexicans were arrested for killing a party of Americans.

For a time it was proposed to hang all thirty-six, but sober counsel prevailed and only three were hanged; this after formal jury trial. Unknown bandits waylaid and killed Isaac B. Wall and T. S. Williamson of Monterey, and, that same month U.S. Marshal William H. Richardson was shot by Charles Cora in the streets of San Francisco.

The people grumbled. There was no certainty that justice would ever reach these offenders. The reputation of the state was ruined, not by the acts of the Vigilantes, but by those of unscrupulous and unprincipled men in office and upon the bench.

The government was run by gamblers, ruffians, and thugs. The good men of the state began to prepare for a general movement of purification and the installation of an actual law. The great Vigilante movement of 1856 was the result.

The immediate cause of this last organization was the murder of James King, editor of the Bulletin, by James P. Casey. Casey, after shooting King, was hurried off to jail by his own friends, and there was protected by a display of military force. King lingered for six days after he was shot, and the state of public opinion was ominous. Cora, who had killed Marshal Richardson, had never been punished, and there seemed no likelihood that Casey would be.

The local press was divided. The religious papers, the Pacific and the Christian Advocate, both openly declared that Casey ought to be hanged. The clergy took up the matter sternly, and one minister of the Gospel, Rev. J. A. Benton, of Sacramento, gave utterance to this remarkable but well-grounded statement: "A people can be justified in recalling delegated power and resuming its exercise."

Before we hasten to criticize sweepingly under the term "mob law" such work as this of the Vigilantes, it will be well for us to weigh that utterance, and to apply it to conditions of our own times; to-day is well-nigh as dangerous to American liberties as were the wilder days of California.

Now, summoned by some unknown command, armed men appeared in the streets of San Francisco, twenty-four companies in all, with perhaps fifty men in each company.

The Vigilantes had organized again. They brought a cannon and placed it against the jail gate, and demanded that Casey be surrendered to them. There was no help for it, and Casey went away handcuffed, to face a court where political influence would mean nothing.

An hour later the murderer Cora was taken from his cell, and was hastened away to join Casey in the headquarters building of the Vigilantes. A company of armed and silent men marched on each side of the carriage containing the prisoner. The two men were tried in formal session of the Committee, each having counsel, and all evidence being carefully weighed.

King died on May 20, 1856, and on May 22nd was buried with popular honors, a long procession of citizens following the body to the cemetery. A popular subscription was started, and in a brief time over thirty thousand dollars was raised for the benefit of his widow and children.

When the long procession filed back into the city, it was to witness, swinging from a beam projecting from a window of Committee headquarters, the bodies of Casey and Cora.

-- end of Part Two, The Vigilantes Of California

The Vigilantes Of California, Part Three

Emerson Hough was born in 1857 and passed away in 1923. He was an American author, Western Historian, best known for writing western stories and historical novels. One such novel is titled The Story of the Outlaw which was first published by the Curtis Publishing Co. in 1905 and then published again by the Outing Publishing Company, New York, in 1907.

As with all of his books, from outlaws to border wars, from vigilantes to lawmen, The Story of the Outlaw includes historical narratives of the American West. The Vigilantes Of California is a chapter in that novel. Because of my Blog's limited space, I'm posting this chapter in four parts. Since Emerson Hough is known to have written factual accounts, I hope you enjoy the historical accuracy of what took place in the American West.