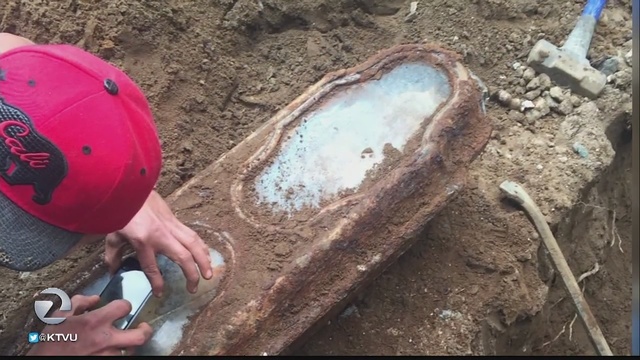 Researching history is full of the unexpected. For example, I was reading recently how both Fort Larned and Fort Dodge, Kansas, abandoned their military cemeteries when they closed those forts in 1886. And frankly, I was a little surprised at that. I guess I made the mistake of assuming that the folks back then would have had a little more respect for the honored dead.

Then of course, I started remembering about what took place when the City of San Francisco banned cemeteries within its city limits. Reading a lot of the newspapers of the time, you find that there were all sorts of excuses used to get them banned -- and even more excuses were made to get them moved. Yes, moved.

By the mid-1800s during the California Gold Rush, there were commentaries in local newspapers regarding the need for a cemetery for others.

"A CEMETERY. A committee has been appointed by the Protestant, Episcopal Church to confer with other city churches on the propriety of memorializing the Ayuntamiente to set aside a portion of the public domain for the purposes of a burial ground. We trust this worthy work will be carried forward, and we have no doubt the council will cheerfully pass the necessary regulations." -- Daily Alta California, 1849.

First in 1914 and then in 1924, the city passed an Ordinances demanding the removal of all 120,000 to 150,000 persons buried in all of the cemeteries in the city be moved. With that, during the 1920s, the Masonic and Odd Fellow's were moved to the Town of Lawndale, south of San Francisco in San Mateo county. Lawndale changed its name to Colma in the 1940s.

The removals for the Calvary and Laurel Hill cemeteries were held up in court challenges, and it wasn't until about 1941 that the removals were thought finished. The National Cemetery at the Presidio was left alone because it was a U.S. Army base. It still exists to this day. As for the City Cemetery, it was moved at some point.

Eventually everyone thought to be buried within the City of San Francisco was supposedly moved. Yes, "supposedly"!

You see, though it's thought that the city simply knocked down all of the tombstones and monuments back in 1909 to put in a golf course, coffins and tombstones have been surfacing in San Francisco for years since the supposed removal.

One such case took place during the summer of 1993 when renovations and expansion work on the California Palace of the Legion of Honor, revealed:

"about 300 corpses from the Gold Rush era --two of them still clutching rosaries, others were wearing dentures and Levis --were unearthed from what appears to be an old pauper's graveyard. Some experts say another 11,000 bodies might lie underneath the museum grounds" -- The Los Angeles Times, 1993.

During that find, Archeaologists actually found over 700 individual bodies.

Now as most of us know, in most of the United States, by law, cemeteries are required to keep records regarding burial or cremations of individuals. Cemetery records will usually contain the name of the deceased, the date of passing and the location of where he or she is buried within a cemetery.

Records may also have information on the burial itself,  the maker of the casket, the making of the headstone as well as specific text that may have been requested for it. And besides information on the deceased itself, the text itself is valuable as it often indicates existence of relatives.

So with knowing this, one would think that all of those records were turned over to the city of San Francisco or are still in the hands of the cemeteries who were supposed to have moved all of those graves. But not, that's not the case at all.

And yes, the fact of how those being dug up, moved and re-buried, can somehow losing their identification has again come home to roost in San Francisco with a find that took place just a few days ago on May 26th.

News outlets reported that workers remodeling a home in the Richmond District of San Francisco made a shocking discovery under the garage. To there surprise was a small metal coffin holding the remains of a little girl.

The coffin is believed to have been there since the 1870s, as records show the property used to be part of a cemetery. And while thousands of caskets were moved out of all of San Francisco in the 1920s, '30s, and '40s, many including this one were simply left behind.

Construction worker Kevin Boylan reported that the homeowner, Ericka Karner, was out of town at the time. He called her to inform her of what they unearthed. Ms Karner's house near Stanyan and Golden Gate Avenue was once an Odd Fellows cemetery.

When she heard about the discovery, she said she was torn, "On one hand, this was slightly creepy. And then also, you know, sad. The next thing was, now what do we do?"

Ms Karner called the San Francisco Medical Examiners Office who arrived and opened the metal casket. Inside was the body of three year old little girl almost perfectly preserved. And yes, the officials were said to be very surprised at the remarkable state of the child considering she had been buried there since the 1870's.

There when the casket was opened, Boylan said he was shocked that the remains inside were so well-preserved, saying, "All the hair was still there. The nails were there. That was a giveaway. There were flowers -- roses, still on the child's body. It was a sight to see."

And though one would think the City of San Francisco would take responsibility for this since it was their laws that had the cemeteries shut down in the first place, and it was the city who demanded that those buried be moved after decades in the ground, believe it or not, Ms Karner reported that the City of San Francisco has a policy that stated "the coffin was her responsibility" as it was on her property.

It is understandable that she might not have known what to do next, but Ms Karner did in fact reach out to a San Diego based organization "Garden of Innocence." The group arranges burials of unidentified children.

The group's founder, Elissa Davey, stated, "This little one has no voice. So we need to give her a voice."

Since there are no clues as the girl's name, her family, or how she died, and no one may ever learn her full story, Ms Karner has named the child "Miranda."

While records might never be found, the casket was moved to a refrigerated storage in Fresno. The plan now is to hold a new burial for the child on June 4th in nearby Colma. And no, not in the mass grave where most of those from the Odd Fellows Cemetery ended up back when.

As for the Odd Fellows, Peter Sellars, San Francisco historian for the Odd Fellows, is reported to have said, "This kind of thing happens all the time. I personally know where two burials are on the USF campus that nobody wants to acknowledge." He says the Odd Fellows are committed to helping fund the new internment, estimated at $7,000. "We will bury our own."

Granted that it's not everyday that a 145 year old coffin with a little girl's remains is found under a home's garage, but I really believe it's only a matter of time before more of San Francisco's forgotten resurface. Yes, it is only a matter of time before another of San Francisco's forgotten souls that were left behind and simply paved over actually resurface again -- as if consciously seeking a resting place more fitting than that of under some garage or parking lot.