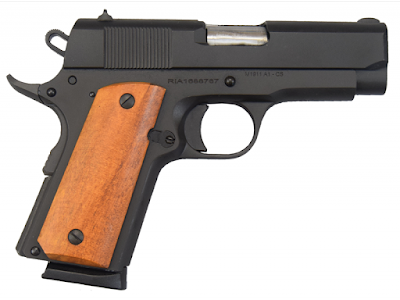 I liked the pistol so much that I bought one. Well, here's an important update on my Rock Island 1911-A1 CS.

The Solution: A stronger Firing Pin Spring will take care of the problem. And frankly, it is a really cheap fix at about $5.

I bought a Spring from Wilson Combat and replaced my firing-pin spring. Since it is just a drop in procedure, and anyone can do it, there is no need to have a Gunsmith replace it for you if you do the same.

Now insert the new heavy duty firing pin spring and firing pin. Push the firing pin in and slide the firing pin stop back into the recess. When the firing pin is centered and the firing pin stop is firming in position, you are done.
So now, someone might ask why I did this even though I haven't had a problem? My reasoning goes back to my training as a United States Marine in that I would rather know about a potential problem and take action on it now then wait for a problem to occur later.

The absolute worse case scenario is that the problem with the firing spin spring doesn't show up on the range, but does when I need my pistol to operate proficiently during a life and death situation. That's why I would rather make the fix just in case.

And yes, that's how I see it.
Tom Correa