The Brunckow Cabin -- The Bloodiest Cabin In Arizona 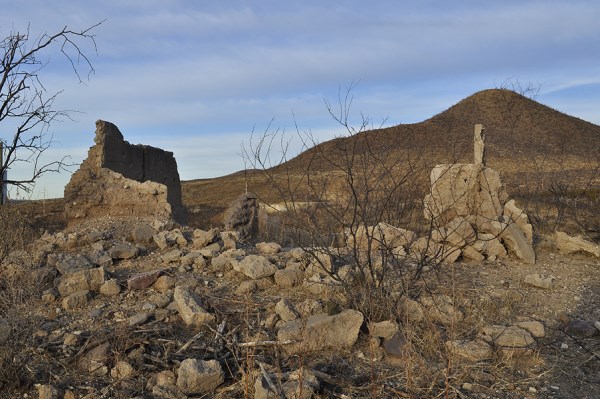 About six and a half miles Southwest of Tombstone along the old Charleston Road between Tombstone and Sierra Vista is the site of the old Brunckow Cabin. It sets approximately 200 yards off of the Charleston Road to the East, (left side) and is known as the bloodiest cabin in all of Arizona. At least 21 or 22 men were killed on this site between 1860 and 1890 with 17 killed on the site before 1880, supposed by the Apaches.

Many of those unknown men are buried near the cabin itself, which makes this site an unofficial graveyard in my opinion. This site had also been owned by, or used by, men such as Fredrick Brunckow, Ed Schieffelin, Frank Stilwell, and Milton B. Duffield.

Fredrick Brunckow was a German immigrant who was born in 1830 and who had migrated to the U.S. in 1850. By 1858, Brunckow had found silver near the San Pedro River and built the cabin as a place to live and assay his ore. He also began mining very near the cabin.

Brunckow hired W. M. Williams as a mine superintendent, his cousin James Williams as a machinist, John Moss as an assayer, and a German cook by the name of David Brontrager, along with several Mexican laborers when he began mining a shaft near the cabin.

On July 23rd 1860, W. M. Williams went for supplies to Fort Buchanan which was about three miles Southwest of present day Sonoita. W. M. Williams returned on July 26th to find his cousin dead within the supply room with supplies scattered everywhere. He immediately ran out of the door and headed back to tell the soldiers what had happened.

When the soldiers arrived at the scene the following morning they found two more bodies. They found John Moss dead in the dirt just outside of the camp and animals had ravaged him. Fredrick Brunckow was found at either the entrance or just inside of the mine-shaft with a rock drill run clean through him. All three men were buried at the site.

When the cook, David Brontrager arrived at a mining camp named camp Jecker; he told the miners that the Mexican laborers had taken him hostage after the robbery and murder of the others. He stated that the Mexicans didn't kill him and even released him when they reached the international border because they believed him to be a good Catholic. The murders were never solved.

When Ed Schieffelin, the founder of Tombstone, first came into the area in 1877, he used the Brunckow Cabin as a base of operations while he prospected the rocky outcroppings Northeast of the cabin. He aslo used the fireplace to smelt any ore he had found.

A few months later Ed had worked his way over to Goose Flats where he found the mother load of silver and registered his claim under the name Tombstone because of the soldiers who had told him, "The only stone you will find out there is your tombstone."

Frank Stilwell, who was known as taking part in the murder of Morgan Earp on March 18th 1882 for retribution of the killings of Billy Clanton and the McClaury brothers at the Gunfight at the O.K. Corral, also had involvement with the Brunckow site. Stilwell who had once been a deputy sheriff under Johnny Behan also owned several businesses.

He owned interests in several mines, a saloon, a wholesale liquor business, a stage line, and at the time of his death at the hands of Wyatt Earp in the Tucson train yards. Stilwell also was the recorded owner of the Brunckow mine site.

The last well-known man to be killed at the Brunckow cabin was Milton B. Duffield. Duffield is best known as being the first United States Marshal appointed to the Arizona territory, a post he held form March 6th 1863 to November 25th 1865. Duffield was not a well liked individual because of his nasty demeanor and champion of his own opinions, but he did have a reputation for being fearless.

One man by the name of John Bourke described Duffield as a man who carried 11 firearms and one knife upon his person, mostly concealed.

Milton B. Duffield acquired the Brunckow mining site in 1873, but another man by the name of James T. Holmes also claimed ownership. On June 5th 1874 Duffield arrived at the Brunckow cabin to evict Holmes. As he approached he began waving his arms and shouting like a madman in his usual manner.

Holmes, assuming Duffield was armed to the teeth as he normally was, walked out the front door carrying a double barrel shotgun and without hesitation shot and killed the 64-year-old ex-marshal. It was at this point that Holmes realized that Duffield was unarmed, which seems strange.

John Holmes was arrested and sentenced to three years in prison, but he escaped before serving anytime what so ever. The authorities did not really go after Holmes and he was never again seen in the Arizona territory.

Milton B. Duffield was also buried at the Brunckow Cabin site and his remains are still interred there to this day. He is just another one of many in an unmarked grave and in an unknown location surrounding the cabin.

On May 20th, 1897, The Tombstone Prospector, reported that Brunckow's Cabin was where a gang of bandits fought each other over what they just stole from a Wells Fargo gold shipment. Since they could not decide on how to divide their spoils, they turned against one another and shot it out. They reportedly shot each other to death as all five of the bandits were later found dead. The stolen gold was recovered at the scene and returned.

Back in the early 1990s, the Brunckow Cabin was a good place to set up camp because it was secluded, quiet, and dark as three feet down a cow's throat. This made a great location to get away from people, enjoy the solitude, think, and look at the stars.

I had camped at the cabin on three different occasions, twice with a friend of mine whom I had worked cows with, and once by myself. Back then there was no fence blocking the dirt road or any signs declaring the spot as a historic landmark, and you could drive right up next to the cabin itself.

Ever since the ghost hunting fad began taking place, the Brunckow Cabin has been one that the paranormal societies seem to want to investigate. Even the show, "The Ghost Hunters," has been to this site doing their investigation.

I am not debating weather ghost or spirits exist, but it seems strange to me that these folks usually find some proof of paranormal activity in most cases.

Having camped there myself three different times I will tell you, the only sounds I heard while there were coyotes, Javalina running through the brush, pack rats, and one rattle snake. Most city folks do not understand how well sound travels through the open desert.

The rustling sound of the Javalina busting through the brush at a distance can sound as though it is nearby and the sound is not distinguishable to folks who haven't heard it before. This sound can easily be mistaken for something or someone close by, which is why when they investigate the area they believe the noise had come from the cabin, yet nothing is found.

I believe that the people searching for ghosts already have the paranormal on their mind when they reach their location so their minds can play tricks on them, only my opinion.

When I spent my time at the cabin, I had no such thoughts of the paranormal, therefore, I had no ghostly experiences at all. It was only a nice quiet evening enjoying what the solitude of the desert has to offer.