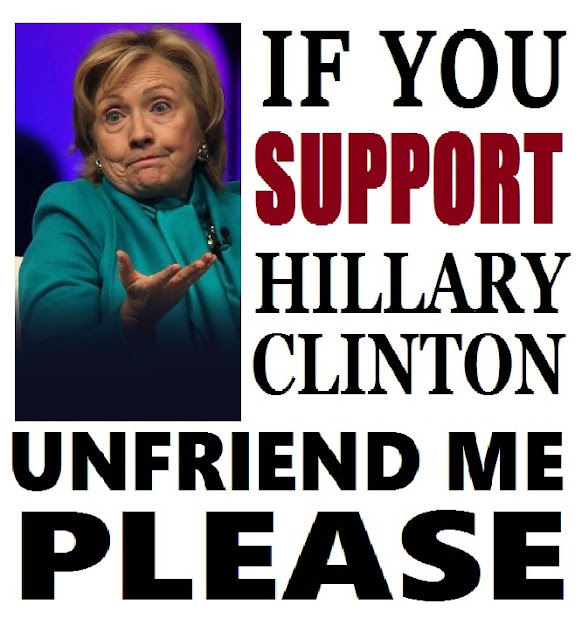 As a matter of full disclosure, I made and posted the above meme to my Facebook page a few days ago.

While I'd hate to lose readers of any sort, but besides my blog being about Old West history, American history, horses, guns, Native American history, and such, my blog is here to support and defend America, our Constitution, and Conservative values.

While I've tried to move my blog away from 2016 Presidential Race simply because there are a lot of much better Conservative websites to get information on current events, I've not given up on seeing Hillary Clinton defeated in November.

I see Clinton as someone interested in lining her own pockets while working to destroy our nation. I see her as an opportunist who will take money from anyone -- even our enemies. I see her as a liar just like Barack Obama, always spinning away from the truth and saying one thing while doing another. And yes, she certainly sees herself above the law.

I see Hillary Clinton's recent criminal conduct and her propensity to completely disregard established ethics and standards, her willingness to break the law, as being dangerous for our nation. I see her as a political psychopath who is toxic for America.

Barack Obama and Hillary Clinton have proven themselves to have many things in common. But more than anything, they are both political psychopaths.

Psychopaths seem superficially normal but tend to be cold-hearted, lack empathy, egocentric, manipulative, and extremely irresponsible -- per Scientific American 2007. And yes, that describes both Obama and Hillary Clinton.

Scientific American stated, "Superficially charming, psychopaths tend to make a good first impression on others and often strike observers as remarkably normal. Yet they are self-centered, dishonest and undependable, and at times they engage in irresponsible behavior for no apparent reason other than the sheer fun of it. Psychopaths routinely offer excuses for their reckless and often outrageous actions, placing blame on others instead."

So now as for my simply request on Facebook? Since anyone supporting Hillary Clinton makes no sense to me and makes me question their own personal rules, ethics, and morals, I do not want friends who are Hillary Clinton supporters.

I will never understand how anyone can support a low life like Hillary Clinton (1) who got 4 Americans killed in Libya when in fact there were U.S. Marines a little over an hour away and could have saved them; (2) who as our nation's top diplomat took what many are calling "bribes" in the way of millions of dollars from Muslim countries for the Clinton Foundation; (3) who wants to bring millions of Muslim radicals here; (4) who refuses to use the term "Radical Islam", (5) who has not admitted that she willfully and intentionally broke National Security laws and knowingly breached National Security with her private email server; (6) who came out in defense of Planned Parenthood, a Billion dollar Corporation that receives government subsidies, after that Corporation was found to be selling the parts of dead babies; (7) who has been caught in lie after lie after lie. And yes, these are only a few of the reason why I don't want Hillary Clinton supporters as friends.

Yes, I can't help but wonder about the character of anyone who supports Hillary Clinton, or if they approach the world in the same way!

Lie, cheat, and steal is the Clinton Legacy no matter how hard her and her loyal supporter try to rewrite it.

According to the FBI Director, Hillary Clinton is under "criminal investigation" but she calls it a "review." And yes, she has millions of supporters who I can't help but wonder if they are just like her?

Frankly, the bottom line here is simple. If you are friends with a Hillary supporter, ever wonder if they can be trusted or if they're just like her? Every wonder why they think it's OK for her to be above the law or as crooked as she is? Ever wonder if they have the same lack of morals that she does?

And yes, I believe the very best reason for not befriending Hillary Clinton supporters is that they're probably anti-American Obama supporters. And since I see Obama supporters as people who hate America, Liberals who see America as being what's wrong with the world instead of what's right, I don't associate with such people.

And yes, that's the way I see it!
Tom Correa