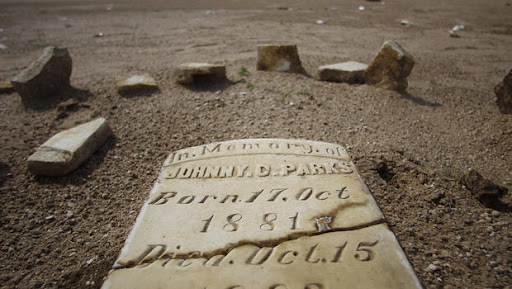 Above is the remnant of a child's grave site which is normally at least 20 to 30 feet underwater. It is part of other remnants of the old town of Bluffton, Texas, that resurfaced as 2011's drought shrank the state's largest inland lake.

Bluffton, also known as New Bluffton, is on Farm Road 2241 near the western shore of Lake Buchanan twelve miles northeast of Llano in northeastern Llano County. According to a Texas history site, Bluffton was one of the earliest settlements in the region that was to become Llano County.

Bluffton grew to some significance because it was near an early saltworks operated by Davie Cowan and was also near several Colorado River crossings between Burnet and points west.

In 1873, a post office was established there with John O. Brown as the first postmaster. By 1883, besides having having a blacksmith shop, a cotton gin, a hotel, a few saloons, and shops and stores, the town of Bluffton was a stage stop between Burnet and Llano.

In that year, 1883, a fire which was supposedly started by drunken cowboys, destroyed the town. That didn't stop Texans from rebuilding the town just a half mile north.

Now, as most who know Old West history, for economic reasons it was not unusual for towns back in the day to lobby railroads to come through their towns. This was the same case with Bluffton, but it was for naught.

During the Great Depression when the worse drought in American History created the Dust Bowl, our Federal government saw that positive action needed to be taken to alleviate this from happening again. That was when the project to create Buchanan Dam came about.

Work on the dam began in 1931, but it was the Great Depression and funding was pretty tight so the project was suspended. Work resumed in 1935, and the dam completed three years later.

Initially the dam was to be called Bluffton Dam, then it was to be known as Hamilton Dam and Reservoir, but its name was changed to honor Texas State Representative James P. Buchanan who was responsible for securing the funding for the project.

Lake Buchanan was artificially created upon the completion of the adjacent Buchanan Dam in 1938. The flooding of the lake forced the community of Bluffton to relocate 5 miles west. Remember, the original town of Bluffton was moved a half a mile after the 1883 fire wiped it out, so now with the creation of Lake Buchanan, Bluffton moved again. This time five miles west.

To add insult to injury, Lake Buchanan caused the relocation of State Highway 29 between Burnet and Llano, the town of Bluffton became even more isolated. According to research, in 1986 the local economy focused on ranching, tourism, and retirement, and the community had seventy-five residents, a post office, and a store. The population was still reported to 75 in 2000.

While the flooding of Lake Buchanan forced Bluffton to move 5 miles west, the original town of Bluffton has been under water since then. A drought in 2011 caused Lake Buchanan's water level to drop so significantly that it exposed the remains of the town.

News agencies reported that the original Bluffton was resurfacing. Along with remnants of the town were graves that were lift behind.

Johnny C. Parks died two days before his first birthday more than a century ago. His and other graves slipped from sight along with the rest of the tiny town of Bluffton.

In 2011, it was reported that the cracked marble tombstone engraved with the date Oct. 15, 1882, had been eerily exposed as a yearlong drought shrank Lake Buchanan. Yes, the graves were a mere 20 to 30 feet under water.

If the gravestones of our pioneers make you wonder what else was revealed, you should know that reports from across the state of Texas stated that receding lakes have revealed a prehistoric skull, ancient tools, fossils, and even a small cemetery that is believed to contain the graves of freed slaves.

A century-old church has emerged at Falcon Lake, which straddles the Texas-Mexico border on the Rio Grande.

Some of the discoveries have attracted interest from local historians, but also looters who see dollars in scavenging pieces of Texas history and other artifacts. And yes, it was reported that more than two dozen looters had been arrested at Lake Whitney, about 50 miles south of Fort Worth, for removing Native American tools and fossils that experts believe could be thousands of years old.

At Lake Georgetown near Austin, fishermen discovered what experts determined was the skull of an American Indian buried for hundreds or thousands of years. It's not clear what will become of the skull, said Kate Spradley, a Texas State University assistant anthropology professor who is keeping it temporarily in a lab. Strict federal laws governing American Indian burial sites bar excavations to search for other remains.

But for the most part, reports state that there are no such restrictions for the nearly two dozen unmarked graves discovered in a dried-up section of a Navarro County reservoir about 50 miles south of Dallas. Some coffin lids are visible just under the dirt. As for that graveyard, it was supposedly excavated moved remains to a cemetery, said Bruce McManus, chairman of the county's historical commission. He said the area of Richland-Chambers Lake is on property formerly owned by a slave owner.

And no, it's not only old Texas which is resurfacing, reports state that the low water levels revealed the long-submerged building foundations of Woodville, Okla., which was flooded in 1944 when the Red River was dammed to form Lake Texoma.

As for old Bluffton, most there say that it has been exposed occasionally during times of drought. The receding waters have revealed concrete foundations of a two-story hotel, scales of an old cotton gin, a rusting tank and concrete slabs from a Texaco station that also served as a general store. The tallest structure is what's left of the town well, an open-topped concrete cube about 4 feet high. And yes, Johnny Parks' tombstone is among a few burial sites. 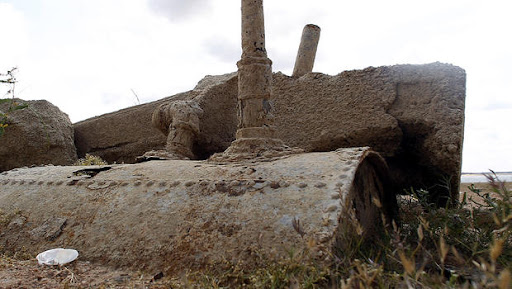 In this picture is a rusting tank and concrete slabs from that Texaco service station. It would normally be under at least 20 to 30 feet of water.

Pat Mercado-Allinger, the Texas Historical Commission's Archaeological Division Director, stated at the time, "In an odd way, this drought [2011] has provided an opportunity to view and document, where appropriate, some of these finds and understand what they consist of. Most people in Texas probably didn't realize what was under these lakes."

Local historian Alfred Hallmark, whose great-great-great grandfather helped establish Bluffton, said his research showed that 389 graves were moved starting in 1931 when dam construction began. But frankly, I don't know if they got all buried there. And if they did move all, why leave the grave stones behind?

To me, while I could be wrong, it seems that every once in a while those who were left behind for one reason or another call out to us.