The United Kingdom Is Free Once Again 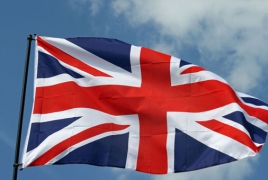 God Bless The United Kingdom!
They Have Their Freedom Back!

For years many of my readers in Europe have complained that the European Union has become completely void of any sort of scrutiny or democratic rule. Yes, many have wanted accountability from the completely undemocratic EU which has too many powers and a seemingly endless amount of Socialist desires.

Well now British subjects (citizens) have had enough with foreign oppression from Brussels! The British have overwhelmingly voted to leave the European Union federation of member nations.

That is not what the European Union did! It actually strayed far afield from the initial concept. And yes, the problem was it's Socialist societal demands that it made on its members. Yes, mainly Socialist, Political Correct, self-serving demands.

Yes, laws were being made in the EU Capital of Brussels, Belgium, and were being pushed on British subjects. Many of those law were in complete defiance of the laws of Great Britain. And no, that did not stop the EU "leadership," an un-elected body, to legislate and make as many laws as they wanted.

It was so bad that 60% of all laws with the British people were living under did not come from their government -- but from the European Union's Socialist leadership in Brussels. Belgium.

Yes, I have stated Brussels, Belgium, a few times for a reason. The EU established their headquarters there, and the leadership which has been passing laws is not representatives of the British people. The EU leadership is an un-elected body making laws that supersede the laws of their member nations.

Friends, this would be the exact same thing if we were to allow the United Nations members nations legislate the laws of the United States.

This is about British Sovereignty!


Yes, the United Kingdom lost it's sovereignty as an independent nation because it joined into an "economic alliance" with an organization which was never supposed to be writing laws for peoples of different nations. And yes, demand that they do or be threatened with sanctions and other penalties.


Among the oppressive EU demands is the limiting of the British working class to prosper. What the EU did to the working class in the United Kingdom is make the minimum wage the maximum wage in many sectors.

And from what I've read, it is a fact that even the British Government's own statistics, as well as that from labor unions, show that the EU has intentional kept down wages for the working classes in the United Kingdom. And frankly, that doesn't surprise me since one of the tactics of Socialists is to milk all of the money they can get off of a great economic powers and bring them to their knees.

The EU tried to bring down the United Kingdom which is still a great economic power. I believe the economy of the United Kingdom is ranked 5th in the world. And with that, despite the shitty attitudes of the EU spokesmen in Brussels, the EU knows that it is definitely the loser with Great Britain pulling out of the federation.

While Socialism is the European Union's stock and trade, the EU refuses to come to grips with what many of their member countries are finally recognizing -- that the Muslim migration is nothing less than a Muslim Invasion.

For the EU, it appears they could care less about the concerns of members who are worried their security. The EU has issued threats to member nation Poland who have refused to open their borders. And yes, the EU has even pressured France to reopen their national borders which were closed after the Muslim terrorist attacks last year.

That's exactly what's taken place in the United Kingdom, and I'm darn proud of the British for making the United Kingdom great again. For years many have complained that the European Union has become an completely void of any sort of scrutiny, having no accountable, and completely undemocratic, with too much powers and Socialist ideals.

What Does The United Kingdom Get From Exiting the European Union? Freedom!

So now, was it wrong that the vast majority of the British people finally got fed up with EU laws superseding British law? Is it wrong to regain one's freedoms and sovereignty? No! In fact, it should be applauded.

I truly believe that the EU over-stepped its boundaries in it's actions and the British people said enough is enough! Now that the June 23rd vote has gone through, the people of the United Kingdom regain a great deal including:

That brings me to my last bit of encouragement for our British cousins. Fact is, whether they EU leadership wants to admit it or not, the European Union and it Socialist policies is unraveling right now!

Germany has been threatening Poland because of it's desire to keep Pole borders closed to Muslim "refugees." Greece and Italy are under siege and sinking. France is now awake and fighting the Muslim threat. And right now, Portugal, Spain, and the Scandinavian nations in the EU are taking a long look at the decision that the British have made. Many citizens of those nations want the same in their future.

The people of the nations which belong to the EU do not see themselves as citizens of the EU, but as Poles, French, German, Italian, Portuguese, Spanish, and so on. They too see an EU which is undemocratic, unaccountable, and oppressive.

I really believe that we will see the demise of the European Union and it's idea of a One World Government sooner than later. And as for the United Nations, I see them as corrupt, as Socialist, as anti-democratic as the EU.

Yes, I see the attempts by the UN to "legislate" and supersede our laws the same as what the EU has been doing to the United Kingdom. And frankly, because the UN has violated its own charter in that it not supposed to be a governing body, I would certainly love for our nation to exit the UN and send them packing.