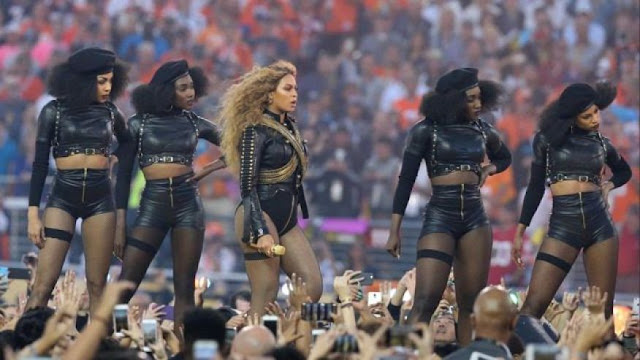 So there I was minding my own business when a bunch of Black hookers dresses like strippers appeared during Half-Time at Super Bowl 50.

Most wore fish net stocking, super short shorts, and everything they were selling was on full display. Those gals looked like hookers and they didn't leave much to the imagination as to what they were thinking -- they all look very angry.

Earlier in the week, I got into a discussion with a friend about how the NFL would probably do what they call a montage of all of the great teams, great Quarterbacks, great Coaches that have won the Super Bowl over the last 50 years. But no, instead the NFL gave us all a bunch of pissed off Black women all dressed like hookers doing some sort of dance that usually entails getting dollar bills from an admirer nearby.

Back in the late 1970s and '80s when I was working as a Security Supervisor in charge of hundreds of guards in Alameda County, it was always interesting to check on guards working in Oakland. Of course just walking to the Oakland Police Department was always sort of interesting in itself considering just a block away was the start of where a lot of Oakland's hookers hung out.

Black hookers and their pimps with their big cars and funny clothing always lined the street just adjacent to the Oakland PD. And yes, like what was taking place uptown on Oakland's MacArthur Blvd, the vast majority of hookers there were young Black women -- many stripped during the evening and hooked at night.

It was always a sort of joke to have to go to the Oakland Police Department and park a block away, then make my way pass the Black hookers and their Black pimps. It was slavery but don't tell them that. They were way too ignorant to understand what slavery really is -- even if their slave master happens to be Black and their pimp. And yes, come to think about it, I'd swear that there were no White pimps and only a few White hookers.

The whores were all fairly nice for the most part. And of course, depending on if their welfare checks had come in yet or not, they'd sometimes offer you a discount for a 5 minute roll in the hay. The pimps usually played their roles to the hilt, always acting bad as can be. But yes, I remember having to thump a few who were messing with my guards -- especially my female guards. They'd cried like babies when beat on.

Most of the hookers dressed pretty provocatively as whores will do. But then again, they are selling something aren't they! Most wore fish net stocking, super short shorts, and everything they were selling was hanging out. If memory serves me right, most whores didn't leave much to the imagination back then. Fine, I guess very little has changed over the years.

So OK, now to the subject which all sorts of people are talking about today. Many folks out there simply don't like what took place during Half-Time at Super Bowl 50.

Ever wonder what you see on television when the sound is off? Or what it reminds you of? As for me, being frank, since we at our Super Bowl Party at our local Legion, and yes we had our television volume turned off during Half-Time, the group of angry Black "dancers" just looked like a group of Black hookers doing some sort of strip tease without stripping. Frankly, they looked like they were defending a corner in some big city.

I didn't know who the lead dancer/hooker was until someone said her name was "Bounce." And frankly, I thought that was appropriate. Although I have to admit that "Jefe" may have been more appropriate considering her attitude was one of an angry boss.

And as for not knowing anyone there, I still don't know who the little Black child singer was who she was on stage with. And at the end of the whole thing, I really don't know who the White boy was who slipped in the middle of their act. And no, one couldn't help but laugh at what looked like a human Oreo Cookie standing on screen. 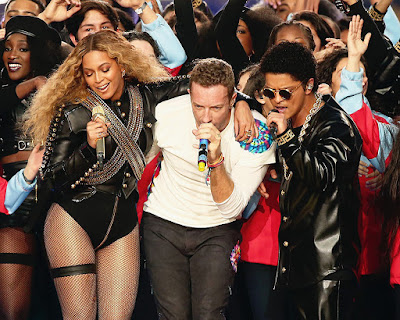 I have no idea what they were doing. I assume they were singing because they all held microphones, but frankly who knows? They could have been screaming the alphabet if they knew it. It's anyone's guess.

I read today where the Half-Time show's centerpiece gal is some lady by the name of "Beyonce" and not "Bounce." Yes, she only has one name. And yes, from what I gather she's supposedly pretty famous. Yes, that surprised me. 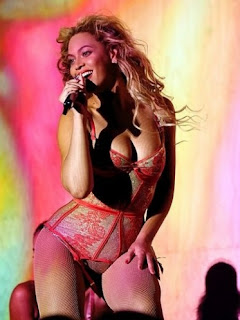 I was sort of shocked to hear that she's famous because one would think a woman who is that famous wouldn't have to parade around like a hooker? But then again, I might be wrong? Maybe that's her whole act?

I looked her up on Google and found that she dresses that way a lot for her shows. So with that, I figure she must need the money. Or of course, her self-esteem is really in the toilet.

Either way, I just found out that when "Beyonce" did yesterday's Super Bowl 50 Half-Time show, she apparently had a political message to get out.

Flanked by dancers who sported "afros" and black berets, the angry looking bunch of dancers who I thought were hookers were referencing the Black Panther Party and Black Live Matter. And yes, supposed the whole cross bandoleer look on Beyonce’s outfit was supposedly a tribute to Michael Jackson. At one point during the performance the backup dancers and Beyonce gave a salute, and they later formed an "X" formation, which now I find out was a reference to Malcom X.

OK, so this is not all that surprising in this day and age. And it isn't surprising that the NFL would allow an in-your-face "racist" Super Bowl Half-Time show -- not really. These are the times we live in. Racism from Blacks is OK. Any hint of "racism", even when it isn't racism from Whites is not OK. Because of that, America gets crap like this Half-Time show.

I was surprised at the NFL for not giving at least a small nod to all of the great teams, the great Quarterbacks, the most valuable players, or the great Coaches, who have won the Super Bowl over the years. Instead, we got a montage of celebrity acts who have done Half-Time shows over the years. Imagine that for a moment. For me, I came away thinking that the NFL puts more value on those relatively short Half-Time shows than the teams who actually played the games. Frankly, I don't know why the NFL allowed that?

As for the whole let's celebrate Blacks thing at the Super Bowl, that bothers me only because it favors one group in America while excluding EVERYONE else. It helps divide the nation on color and race, and it was also anti-police in nature which in itself is very wrong. And no, I don't know why the NFL allowed it?

They should have praised the hundreds of thousands of law enforcement professionals who keep America safe. Instead of praising them and the security personnel who kept them safe there at the stadium. and who may have stopped any sort of Muslim threat to harm those there at the game yesterday, the entertainers did just the opposite -- and instead spit on them on national television.

They did so by paying tribute to the Black Panthers and Black Lives Matter movements which see our Police and anyone not Black as their enemies. I found out later that Beyonce was shouting the word "Negro" throughout the whole time she shock her ass on the field. Imagine that! Very classy.

For me, it's just one more reason why I'm thankful that the sound on our television was off. We didn't have to listen to the blaring loud noise and screaming that some folks actually refer to as music and singing. And no, we definitely didn't have listen to the political statement of Blacks who do not appreciate who keeps them safe.

As usual, this Super Bowl Half-Time was not entertainment because it wasn't any good. Not even a load of Black women dressed as hookers could make this year's Super Bowl Half-Time entertainment any good. In fact, that is so much the case, that as usual the commercials were better than what Americans got at Half-Time. And frankly, thank goodness none of the commercials were in-your-face Black hate and anti-police crap -- because frankly it's all just getting old.

As for what one of my favorite law enforcement professionals in the nation said when he was asked about this: 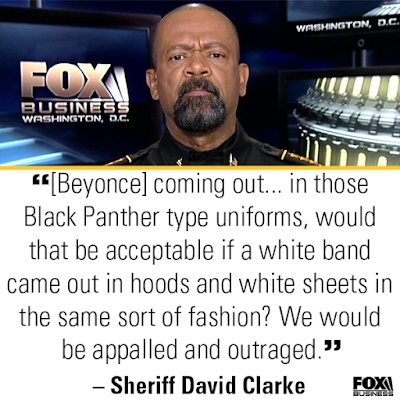 And yes, that's just the way I see it as well.
Tom Correa