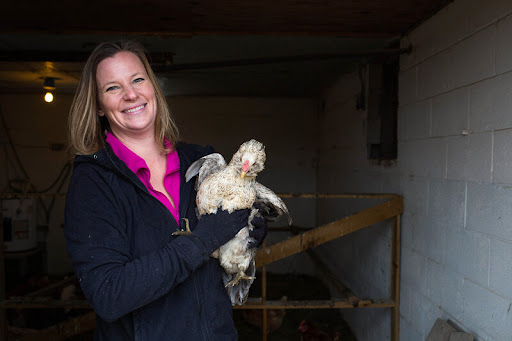 In a report on March 3rd, 2015, it was reported that Air Force veteran Sara Creech quit her job as a nurse three years ago and bought a 43-acre farm in North Salem, Indiana. She named her farm Blue Yonder Organic Farm and has become dependent on farming.

She started out planting an orchard of apple, peach, cherry and pear tree, then she added berry bushes and rows of vegetables. After that, she bought her first chickens.

Sara Creech grew up in Michigan and served as a surgery nurse during the Iraq War. She has a Master's degree and 16 years of experience.

Statistics says that as many as one in five Iraq War veterans came home from service with PTSD. Ms Creech is one of them. She said PTSD made returning to nursing impossible. Her depression and anxiety became so severe, she says she felt like she was dangerous to her patients.

Veterans returning home from Iraq and Afghanistan often have a hard time transitioning back to their civilian lives and careers. Right now, this group of Veterans have higher rates of divorce and are fighting depression, Very sadly, they also have a higher rate of suicide compared to other Veterans. And as for job stability, Iraq and Afghanistan Veterans are more likely to be unemployed than both civilians and Veterans of other wars.

In recent years, thousands of veterans like Ms Creech have showed an interest in farming as a way to find peace and purpose. Several non-profit organizations and universities have launched programs to help them pursue careers in agriculture.

Now that Republicans are in control of Congress, they have gotten on board to give Veterans the financial support they need to be successful farmers. For the first time in the history of the United States, because of the 2014 Farm Bill, Veterans are now designated for the first time as a distinct class of beginning farmers within the U.S. Department of Agriculture.

That status grants Veterans access to low-interest-rate loans to buy animals and equipment. It also allows them to apply for grants to build onto their farm, and it can help them receive extra payments to implement conservation practices on their land.

"More than anything, it's just an acknowledgement," says Michael O'Gorman, founder of the Farmer Veteran Coalition, a nonprofit organization that links up Veterans with farming jobs and apprenticeships.

Mr O'Gorman started the coalition with a handful of interested Veterans' families in 2009. He says excitement about the legislation has helped double his group's membership to 4,000 Veterans in the past year.

Veterans still face all of the obstacles of other beginners: Farming is expensive; The hours are long; Success can be at the mercy of the weather; and profit margins can be discouragingly low. Operators of small farms often face financial problems that require off-farm jobs to keep the business afloat.

Yes, the old saying is true: for a farmer to be successful, you'll find his wife works in town. But fortunately, the 2014 Farm Bill gives veterans an extra advantage over these obstacles.

It not only provides Veterans with access to all of the beginning farmer program's resources, in some cases, it requires the USDA to give Veterans' applications priority preference -- ahead of non-veterans and even minority farmers who usually have all sorts of benefits others don't have. Mr O'Gorman says this preferential treatment is payment for the time Veterans took away from their own goals to serve.

"Veterans don't want a hand out," he says. "But it would be nice to go to the front of a few lines, because even if one did come home unharmed -- many of them didn't -- but they still took years out of the normal development of a career."

While other recruiters might require a full resume, the USDA is eager to attract inexperienced farmers to the field.

According to the 2012 Census of Agriculture, the average American farmer is 58 years old. Farmers over 55 control more than half of our country's farmland, and one in two is likely to retire in the next decade. Since 1987, there has been a decline in the number of new farmers. And yes, only 17 percent at the beginning of their farming careers have less than ten years of experience.

"When you look at the population growth, we're naturally going to need more and more producers to keep pace with the growing demand," says Karis Gutter, the USDA's first military Veterans' agriculture liaison. "The veterans' cadre looks very promising for us."

About 2 and a half million Veterans have returned home from Iraq and Afghanistan. And yes, nearly half of them to rural counties.

A report that came out of the USDA in 2013 stated that rural Veterans could be a wise investment for America's future because they tend to have more education and technical training than their non-veteran rural counter-parts. And yes, they also bring all sorts of skills from their military experience.

"It's an absolute natural fit," Ms Gutter says. "Many of the men and women who have served come from rural backgrounds and get training to work with their hands and have a natural instinct for entrepreneurship."

Three years ago, she quit her job as a nurse and used her savings account and support from her family to buy a foreclosed farmhouse sitting on 43 acres in rural Indiana.

This year, thanks to changes in the 2014 Farm Bill, Ms Creech received $21,000 from the USDA because of her veteran status. She's using the money to improve the quality of her soil and build a hoop house, which will extend her growing season and should increase her profits.

Ms Creech is also getting support at the state level. Some Midwest states are launching marketing campaigns that supply Veteran farmers with a patriotic logo, "Homegrown by Heroes," to help advertise their products. Ms Creech flies a "Homegrown by Heroes" sign at her farmers market table to attract customers.

"The community loves food, and they love Veterans, at least in our area," she says. "But they don't know how to support us. They don't know what we need."

She says being able to designate her business as veteran-owned gives people a tangible way to pay her back for her service. Money, though, is not her priority, she says. "In many ways," she says, "the work pays for itself."

Ms Creech devised a business plan for her organic operation through an Entrepreneur Boot Camp for Vets.  She’s received USDA/NRCS grants for a high tunnel for vegetables and to convert her conventional fields to organic with cover crops.

And yes, like most Vets, she wants to help other Veterans get into farming as well as better deal with their PTSD. She's helping other Vets find their path by hosting Veterans groups at her farm for week-long workshops to give them a taste of life on the farm.

She suffers from PTSD (post traumatic stress disorder) and lost her husband to colon cancer, but none of that matters as she turned to farming to put her life into prospective.

"I know, for me, connecting with farming and working with animals and getting my hands dirty, there was just something, I think, almost renewing. I think it’s a combination -- truthfully -- physically, mentally, spiritually. It’s just this re-connection with life again."

As for me, I believe reconnecting with life is the key to maintaining one's prospect -- especially when dealing with the symptoms of PTSD which can block that from taking place. She is a great example for other Veterans out there who think self-medicating only comes in the form of booze and drugs and destructive behavior.

I salute Sara for her service and for proving that exposing one's self to animals and getting your hands dirty can be a medication all in itself. She made a conscious decision to better her life and other vets can do the same thing. After all, as a vet, it worked for me to get back to basics as well.