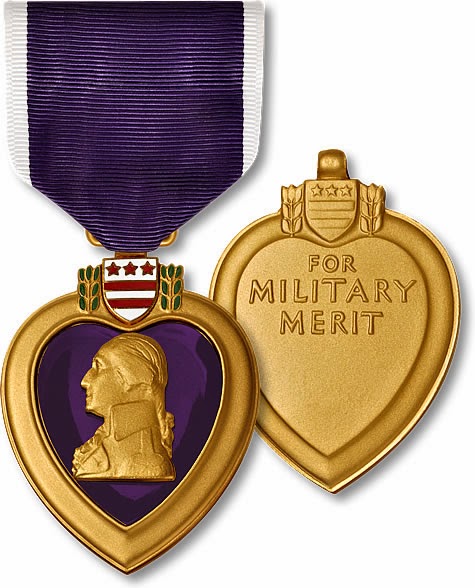 I know this is a little late, but I honestly thought I posted this here as a follow-up to my post regarding the Army denying the troops who were wounded during the Fort Hood terrorist attack Purple Hearts.

For some of you who don't know, I also take care of the blog/website for our local American Legion Post up here.

Yes, I mistakenly posted this report there instead of here first. I want to thank you for writing in and asking about this.

It was announced on February 6th, 2015, that the Fort Hood victims will indeed receive Purple Hearts for their combat action against a Muslim terrorist.

Secretary of the Army John McHugh announced that victims of the 2009 Fort Hood terrorist attack will receive the Purple Heart.

This is an about-face for the military which initially went along with the Obama administration and described the attacks as "workplace violence."

The decision to award the Purple Heart was first reported by Fox News.

The Purple Heart is a United States military decoration awarded in the name of the President to those wounded or killed, while serving with the U.S. military.

With its forerunner, the Badge of Military Merit, which took the form of a heart made of purple cloth, the Purple Heart is the oldest military award still given to U.S. military members.

The original Purple Heart, designated as the Badge of Military Merit, was established by George Washington who was then the Commander-in-Chief of the Continental Army.

He authorized the Badge of Military Merit by order from his Newburgh, New York headquarters on August 7, 1782.

Surpringly the Badge of Military Merit was only awarded to three soldiers during the Revolutionary War. From then on, as its legend grew; so did its appearance.

Although never abolished, also surprising is the fact that the award of the badge was not proposed again officially until after World War I.

The most Purple Hearts awarded to a single individual is nine. Marine Sgt. Albert L. Ireland holds that distinction, being awarded five Purple Heart Medals in World War II and four more in the Korean War.

Seven soldiers, including two Medal of Honor recipients, were awarded eight Purple Hearts:
While the award of the Purple Heart is considered automatic for all wounds received in combat, each award presentation must still be reviewed to ensure that the wounds received were as a result of enemy action.

Modern day Purple Heart presentations are recorded in both hardcopy and electronic service records. The annotation of the Purple Heart is denoted both with the service member's parent command and at the headquarters of the military service department. 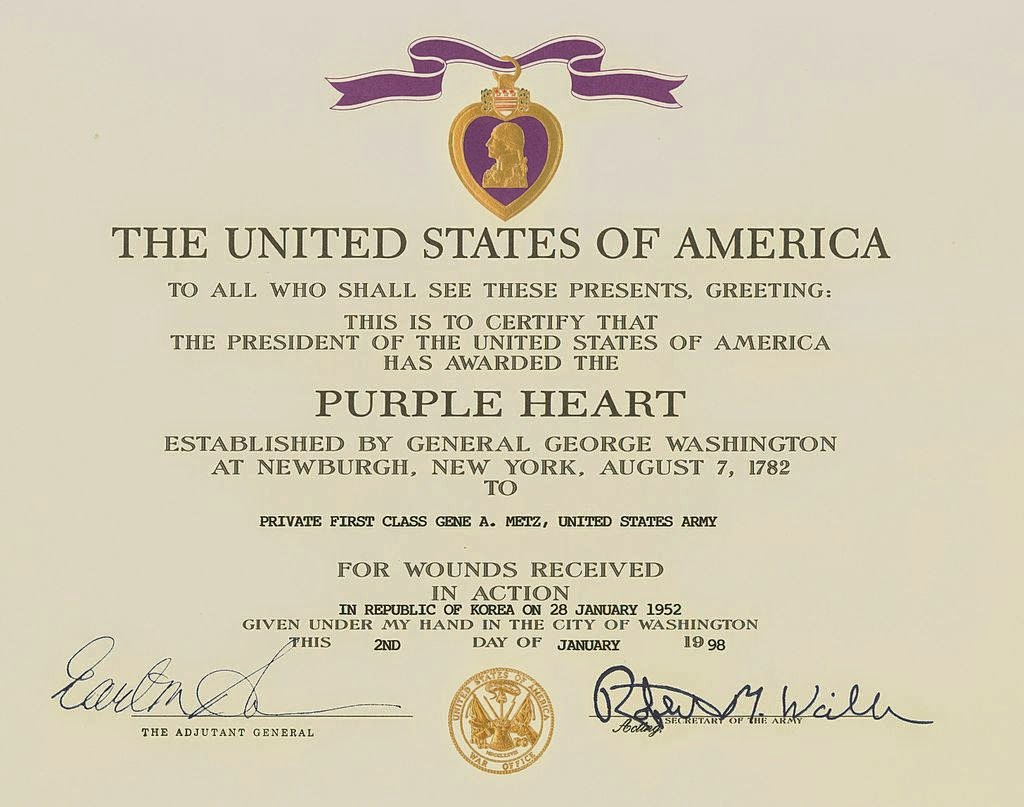 An original citation and award certificate are presented to the service member and filed in their service record (personnel file).

During World War II, the Korean War, and the Vietnam War, the Purple Heart was often awarded on the spot, with occasional entries actually made into service records -- sometimes entries were never made at all.

It is said that during periods of demobilization following each of America's major wars of the 20th century, it was a common occurrence for a unit's admin section to omit even a mention in a recipient's of a Purple Heart award from service records, personnel files.

This occurred due to clerical errors, and became problematic once a service record was closed upon discharge. In terms of keeping accurate records, it was commonplace for some field commanders to engage in bedside presentations of the Purple Heart.

This typically entailed one's Commanding Officer entering a hospital with a number of Purple Hearts and pinning them on the pillows of wounded service members, then departing with no official records kept of the visit, or the award of the Purple Heart given.

Service members, themselves, complicated matters by unofficially leaving hospitals, hastily returning to their units to rejoin battle so as to not appear a malingerer. Yes, this happened more than most people realize.

In such cases, even if a service member had received actual wounds in combat, both the award of the Purple Heart and the Commanding Officer's visit to the hospital was unrecorded in their service record.

Yes, clerical errors are certainly not out of the ordinary as anyone in the military can swear to.

If a Purple Heart is denoted in military records but was simply omitted from a DD Form 214 (Report of Separation form), then a correction can be issued by way of a DD-215 document. These can be found on site at the National Personnel Records Center.


In a written statement, Army Secretary McHugh cited a recent change in the Purple Heart law that allowed the Army to proceed with the medals for those eligible as a result of the Fort Hood terrorist attack.

"The Purple Heart's strict eligibility criteria had prevented us from awarding it to victims of the horrific attack at Fort Hood," McHugh said in a statement.

"Now that Congress has changed the criteria, we believe there is sufficient reason to allow these men and women to be awarded and recognized" with either the Purple Heart or, for civilians, the Defense of Freedom medal.

"It's an appropriate recognition of their service and sacrifice," McHugh said.

Victims of the 2009 shooting and their families had been pressing the military to award the Purple Heart, and the benefits that come with it, for years.

They got a boost when the Republican controlled Congress passed recent funding legislation requiring the Defense Department to reconsider whether the victims qualify for the honor.

The Army statement on Friday said the legislation expanded the eligibility criteria by broadening what can be considered an attack by a foreign terrorist organization.

The Army determined the shooting could be considered an attack because the shooter "was in communication with the foreign terrorist organization before the attack."

Texas Republican Rep. John Carter, who had pushed for the honor, hailed the announcement.

"This has been a long, hard fight," he said in a statement. "The victims of this attack have struggled, suffered and been abandoned by this Administration. No more. Today is a day of victory and I am honored to have fought on their behalf."

Fox News was first to report that the Islamic terrorist attack which was really a massacre with 13 killed and more than 30 wounded.

The Muslim responsible for the attact was Army psychiatrist Major Nidal Hasan. He opened fire after shouting "Allahu Akbar," but the Obama administration decided give Hasan a pass and classified the attack as mere "workplace violence."

Further evidence has steadily emerged since the attack that Hasan was motivated by his extreme religious views. In fact, Intelligence agencies intercepted emails between Hasan and the radical Islamic cleric Anwar al-Awlaki, who, at the time, was a leader of Al Qaeda in Yemen. Awlaki was later killed in a drone strike in 2011.

Hasan was convicted in 2013 and sentenced to death by a general court martial. He is currently incarcerated at Fort Leavenworth in Kansas, awaiting appeal.

After his August 2013 conviction, Hasan told his lawyer, John Galligan, to release letters to Fox News in which Hasan pledged his allegiance to Abu Bakr al-Baghdadi, the leader of ISIS -- the Islamic State.

Earlier this year, a lawyer for victims of the shooting and their families told Fox News that some victims are still so damaged physically and mentally they are unable to work five years after the massacre -- and the benefits that come with the Purple Heart would be a lifeline.

"No one will be the same," attorney Neal Sher told Fox News last month.

Mr Sher told Fox News in January there was stiff resistance to the new congressional language requiring a review of Purple Heart consideration.

"The [Obama] administration and the Pentagon," Mr Sher explained. "They lobbied hard against it. But we worked very hard and we were successful in garnering bi-partisan support for this."

As for me, since combat is combat and location has little to do with being in combat, I think it's about time that those in the terrorist attack at Fort Hood get the awards which they are entitled.