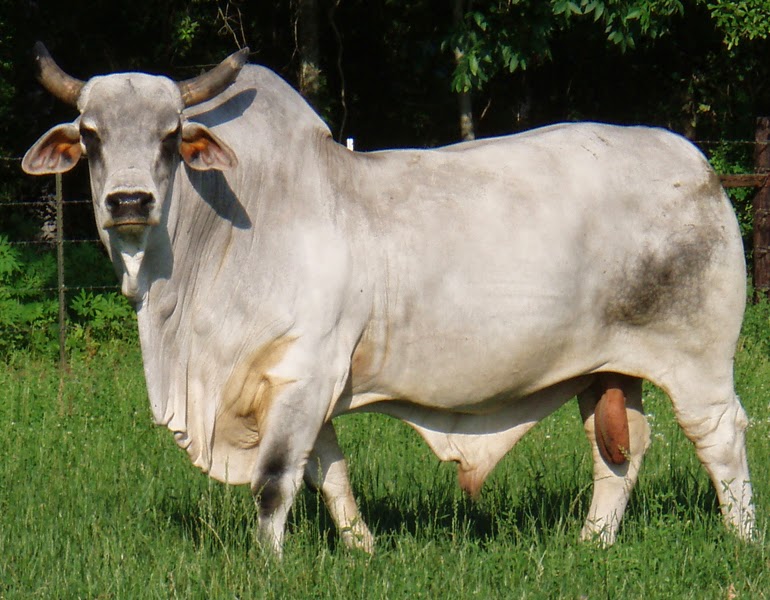 The American Brahman was the first beef cattle breed developed in the United States.

It was bred in the early 1900s as a cross of four different Indian cattle breeds: Gyr, Gujarat,Nelore and Krishna Valley.

Probably the greatest tribute to the Brahman breed and its breeders is the rapid growth of the breed outside of the United States. They have constituted a large proportion of our exports of breeding cattle outside continental North America.

The Brahman is mainly used for breeding and the meat industry. It has been crossbred extensively with Bos taurus (European) beef breeds of cattle. It has been used to develop numerous other U.S. beef breeds including Brangus, Beefmaster, Simbrah and Santa Gertrudis.


It is said that the disposition of Brahman cattle is often questionable. Yet, Brahmans are intelligent, inquisitive and shy.

They are unusually thrifty, hardy and adaptable to a wide range of feed and climate. However, these characteristics also suggest careful, kind handling methods.

Brahmans like affection and can become very docile. They quickly respond to handling they receive, good or bad. Well bred, wisely selected and properly treated Brahmans are as easily handled as other breeds.

As for their physical characteristics:

Brahmans are intermediate in size among beef breeds found in the United States.

The calves are small at birth, weighing 60 to 65 pounds, but grow very rapidly and wean at weights comparable to other breeds.

Brahmans very in color from very light grey or red to almost black. A majority of the breed are light to medium grey.

Mature bulls are normally darker than cows and usually have dark areas on the neck, shoulders and lower thighs.

Studies at the University of Missouri found that Brahman and European cattle thrive equally well at temperatures down to 8° F.

They found that European cattle begin to suffer adversely as the air temperature goes above 70° F, showing an increase in body temperature and a decline in appetite and milk production as 75° F, is passed.

Brahmans, on the other hand, show little effect from temperatures up to and beyond 105° F.

Although heat tolerance is only one factor in environmental adaptation of cattle, it is considered the most important. These are some of the other factors that allow Brahmans to adapt to adverse conditions.

The short, thick, glossy hair coat of the Brahman reflects much of the sun's rays, adding to its ability to graze in the glaring midday sun without suffering.

The black pigmented skin of Brahmans keeps out the intense rays of the sun, which in excessive amounts will damage deeper tissue layers.

An abundance of loose skin on the Brahman is thought to contribute to its ability to withstand warm weather by increasing the body surface area exposed to cooling.

Brahmans have sweat glands and the ability to sweat freely through the pores of the skin, which contributes materially to their heat tolerance.

One factor contributing to the great heat tolerance of Brahmans, discovered in the Missouri studies, is that they produce less internal body heat in warm weather than do cattle of European breeds.

Waste heat is produced from feed at the expense of growth and milk production.

Brahman cattle have been found to fill a unique place in American cattle production. The Brahman and cattle carrying percentages of Brahman breeding have been found extremely useful in the southern coastal area of the United States, where they have demonstrated their ability to withstand hot and humid weather and to resist insects.

In more recent years Brahman cattle have spread considerably from their initial locations and are now found widely through the United States.

They are also good mothers and produce a very satisfactory milk flow under conditions that are adverse for best performance of the European breeds.

Cancer eye is almost unknown in the breed.

They have established a considerable reputation for a high dressing percentage, and their carcasses have a very good "cutout" value with minimum of outside fat.

While Brahman cattle are known for their extreme tolerance to heat and are widespread in tropical regions, and their resistant to insects due to their thick skin is also a plus, Brahman cattle live longer than many other breeds -- they often produce calves at ages 15 and older.

As for their origin, the Brahman breed originated from Bos indicus cattle originally brought from India.

Through centuries of exposure to inadequate food supplies, insect pests, parasites, diseases and the weather extremes of tropical India, the native cattle developed some remarkable adaptations for survival.

These are the "sacred cattle of India," and many of the Hindu faith will not eat meat from them, will not permit them to be slaughtered, and will not sell them.

These facts, in conjunction with he quarantine regulations of the United States, have made it difficult to import cattle from India into this country.

All the Bos indicus cattle are characterized by a large hump over the top of the shoulder and neck. Spinal processes below the hump are extended, and there is considerable muscular tissue covering the processes.

The other characteristics of these cattle are their horns, which usually curve upward and are sometimes tilted to the rear, their ears, which are generally large and pendulous, and the throatlatch and dewlap, which have a large amount of excess skin.

They also have more highly developed sweat glands than European cattle -- Bos taurus -- and so can perspire more freely.

Bos indicus cattle produce an oily secretion from the sebaceous glands which has a distinctive odor and is reported to assist in repelling insects.

As for their origin, it is said that there are a least 30 well defined breeds of cattle listed in India.

Three principal strains or varieties were brought to the United States and used in the development of the Brahman breed are the Guzerat, the Nellore, and Gir.

In addition, the Krishna Valley strain was introduced and used to a lesser extent.

The general similarity of the Guzert strain to the cattle selected and developed in this country would indicate that cattlemen working with the breed have generally preferred this type.

As for their introduction into the United States, there are conflicting reports as to the exact manner of the introduction of Indian cattle to the United States, but it is believed that the first Indian cattle which is recorded were imported in 1849 by Dr. James Bolton Davis of Fairfield County, South Carolina, who, it is believed, became acquainted with Bos indicus cattle while serving as agricultural adviser to the Sultan of Turkey.

Although the descendants of these cattle were spread widely throughout the South, their complete identity was lost during the Civil War.

The story goes that two Indian bulls were given to Richard Barrow, a cotton and sugar planter of St. Francisville, LA., in 1854, by the British Crown in recognition of Mr. Barrow's services of teaching cotton and sugar cane culture to a British representative who was to take these arts to India.

The offspring of these cattle became known as "Barrow Grade" cattle, becoming widely known through the Gulf Coast region.

The success of these two animals led to the importation of two more Indian bulls in 1885 by J.M. Frost and Albert Montgomery of Houston, Texas.

By mating these two bulls to the offspring of the Barrow bulls, the first attempt to concentrate the blood of Bos indicus cattle in the United States was attempted.

A few animals were imported by circus organizations from time to time, some of the more desirable ones being purchased by farmers and ranchers.

One of the more famous of such purchases was a red bull named "prince," acquired by A.M. McFaddin, of Victoria, Texas, in 1904, from the Haggenbach Animal Show.

Another was the sale of about twelve head of Indian cattle by Haggenbach, these finally being acquired by Dr. William States Jacobs of Houston.

In 1905 and 1906, the Pierce Ranch of Pierce, Texas, assisted by Thomas M. O'Connor of Victoria, Texas, imported thirty bulls and three females of several Indian types.

These were personally selected by Able P. Borden, manager of the Pierce Ranch.

In 1925, a second importation from Brazil, including 120 bulls and 18 females, reached this country.

Both groups were shipped to Mexico and driven overland to the United States.

Eighteen Brazilian bulls were brought to Texas by way of Mexico in 1946.

It is said that during the period from 1910 to 1920, many cattle in the south-western part of Texas and the coastal country along the Gulf of Mexico showed considerable evidence of Bos indicus breeding.

Naturally, many of the bulls that were used were the result of crosses with other breeds. Some breeders attempted to keep the stock pure, but they were in the minority.

Since there are records of less than 300 imported Brahmans, most of which were bulls, it must be assumed that other breeds supplied the foundation animals for the breed.

The bulls were used on cows of the European breeds and on the descendants of these crosses.

By the fifth generation (31/32) the offspring carried not only a preponderance of Bos indicus breeding but selection pressure had permitted the development of an animal generally regarded as superior to the original imports for beef production.

The Brahman is one of the most popular breeds of cattle intended for meat processing and is widely used in Argentina, Brazil, Paraguay, United States, Colombia and Australia among many other places.