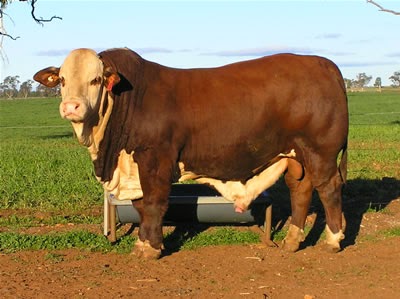 Braford cattle date to the immediate post-World War II era where they were being developed in United States and Australia about the same time.

Braford cattle are a cross between Brahman and Hereford cattle, hence their name. Brafords are approximately 3/8 Brahman and 5/8 Hereford.

The Braford is red like a Hereford with white underbelly, head, and feet. It is stockier than a Hereford, getting the stockiness from the Brahman.

The Braford is primarily used for beef, but sometimes used for rodeo.

Braford cattle, like most recognized breeds today, were born out of necessity.

In the case of Brafords, the necessity to consistently and efficiently produce a uniform product in specific production environments.

Working with a base of Brahman cows that were primarily Partin and Hudgins breeding.

The resulting steer and heifer calves were outstanding, but the Hereford bulls required to produce those calves had extreme problems with feet, eyes and general livability.

Adams quickly realized that using Hereford bulls that were not adapted to South Florida was simply not feasible and he began experimenting with various types of Brahman-Hereford cross bulls.

Eventually he identified Braford bulls that were producing calves that met his needs and he used these bulls and their offspring to form what is recognized as the Foundation Herd of the Braford breed in the United States.


Brafords also have heat and insect resistance beacause of a chemical in their blood, this also makes them ornery by nature. They do best in warm climates.

Braford bulls are not terminal sires. Braford breeders have been careful to increase growth rate in their cattle while avoiding associated large increases in mature size that can reduce the ability of Braford bulls and females to function in everyday conditions.

By avoiding the "bigger is better" syndrome that has plagued the purebred cattle business for years, Braford breeders have also avoided associated problems of difficult calving and market steers that are too big to fit industry needs when finished.

In 1962, Braford breeders formed the Australian Braford Society. The International Braford Association was organized in 1969 by American breeders.

In 1985, the American Hereford Association began registering Braford, but concentrated on breeding purebred animals -- mating Brafords to Brafords -- rather than crossing Herefords and Brahmans.

The IBA and the AHA came together in 1994 to create the United Braford Breeders.

Today, the breed is found primarily in the United States, Australia and Mexico.