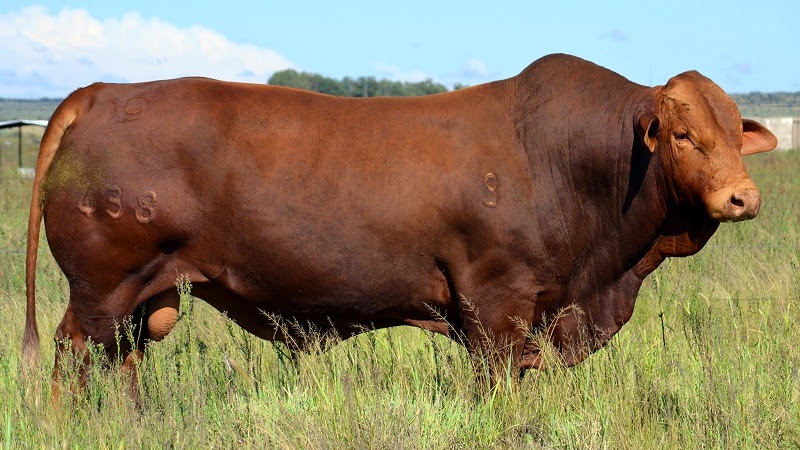 Beefmaster is a breed of beef cattle that was developed in the early 1930s by Tom Lasater which was the breed founder.

Headquartered in Texas, his father, Ed C. Lasater, created the breed, from a crossing of Hereford cows and Shorthorn cows with Brahman bulls.

It was the year 1908 when the breeding program leading to their establishment was started by Ed C. Lasater.

He purchased Brahman bulls to use on his commercial herd of Hereford and Shorthorn cattle. The first of these bulls that he used were principally of Gir breeding, although some of the Nelore breed were also used.

In 1925 he introduced Guzerat blood into the herd. And yes, it was Mr. Lasater who also developed a registered Hereford herd in which the cattle had red circles around each eye.

In both his Brahman and Hereford breeding, milk production was stressed.

Following his death in 1930, the breeding operations came under the direction of his son, Tom Lasater, who began to combine the breeding of the Brahman and Hereford cattle and also used some registered Shorthorn bulls.

After making crosses of Brahman-Hereford and Brahman-Shorthorn, he felt a superior animal had been produced and called the cattle "Beefmaster."

The exact mixture of the foundation cattle is unknown, but is thought to be about 25% Hereford, 25% Shorthorn and 50% Brahman.

The Lasater Ranch estimates that modern Beefmaster have slightly less than one-half Brahman blood and slightly more than one-fourth of Hereford and Shorthorn breeding.

Though there are no standards for color, most are red to light red, with white mottled spots. these cattle are a dual purpose breed, meaning that they can be used for milk as well as beef.

The original intention was to produce cattle that could produce economically in the difficult environment of South Texas. Subsequently, the cattle were handled under range conditions that were often adverse,

The breeding operations were carried on in multiple-sire herds and rigid culling was practiced. The culling program was based on disposition, fertility, weight, conformation, hardiness and milk production.

Stress was placed on the production of beef. No selection has been made to characteristics that do not affect the carcass, such as horns, hide or color.

The Lasater Ranch breeding program provided an interesting example of the use of mass selection in reaching a goal.

Critics should recall that other breeds have been established in a similar way -- a blending of breeding followed by selection for economically important points.

Uniformity in many breeds has been achieved only after many generations of selection.

The original concepts of Tom Lasater in developing Beefmaster cattle have continued.

Considerable progress has been made in selecting cattle that give very satisfactory levels of production under the practical and often severe range conditions.

Satisfaction by ranchers and creditable performance in feedlots indicate the value of stressing the important utilitarian points in developing breeding herds.

Selection continues for those points which were originally used by Mr. Lasater and are now known as the Six Essentials -- Weight, Conformation, Milking Ability, Fertility, Hardiness and Disposition.

And yes, the Six Essentials are factors looked for in most all breeds today.